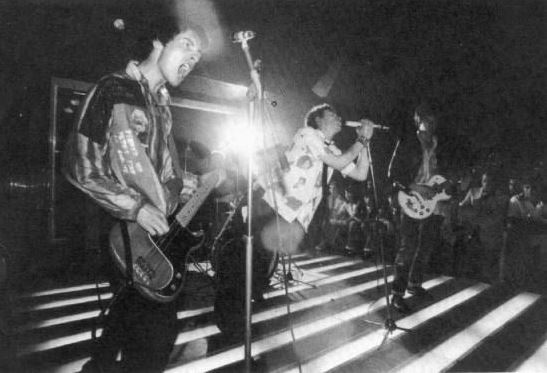 The Sex Pistols performances at the Chalet Du Lac on 3rd and 5th September in 1976 were significant dates in both the UK and French punk scene. For the Sex Pistols, it was their first international show highlighting their success. For France, it opened the door towards a new style of passionate and energetic music. In true punk style, not much remained after the gig, most décor was destroyed, and we can be grateful for some photos taken by Ray Stevenson on the performance of Sunday 5th September.

The performances took place at the Club Chalet Du Lac, which was previously a disco, but during its closure it was refurbished as a live music style venue with the help of Malcom McLaren.

At the Sex Pistols gigs at the Chalet Du Lac there were some notable attendees in the punk scene, such as Métal Urbain who assisted in organising their performances at the Chalet Du Lac. Métal Urbain were a French punk rock band, who were met with enthusiasm in the UK, especially by John Peel and the Rough Trade label. Métal Urbain’s single ‘Paris Maquis’ was Rough Trade’s first release. Anne Pigalle was also present at this event and became, at the time, the only French solo female singer to have ever been signed to a British label. Also joining the crowd (there had been free admission believe it or not) were the designer Castelbaljac, French Punk rock magazine owner Michael Esteban, Marc Zermati and Alain Pacadis.

However, most attendees of these gigs were the original disco club goers of the old venue and were highly sceptical of the UK punk scene. The owners of the venue sought the help of Pierre Bénain, a Paris-based photographer, notable for his work in the music scene especially with the Sex Pistols. The Chalet Du Lac event is important to the relationship of Bénain and Malcom McLaren, marking the start of their friendship and paved the way for Bénain working with The Sex Pistols. Bénain was asked to find the most fashionable English rock band of the time…and the name that came to mind was The Sex Pistols.

The Sex Pistols first show on 3rd September 1976 started at midnight. The event attracted over 2000 people with many waiting outside for a place.

The décor was made of glass with a giant disco ball above the stage designed by Philippe Stark. They introduced their first set with Anarchy in the UK. The crowd watched on with a degree of shock and awe having never seen such performances incorporating a specific aesthetic, energetic vocals and a sound that was loud and clear – nothing like French music or indeed the French punk music. This marked the start of change within the French punk scene.

On the Saturday after the show, the Sex Pistols and the “Bromley Contingent “ met up at the Deux Magots, an old hang out of Sartre, Occupying two tables they soon became the centre of attention, with Rotten replete in a beret to add a Gaelic touch to the look that was described as “Couturiers Situationnistes” by  Michael Estebans Rock News. 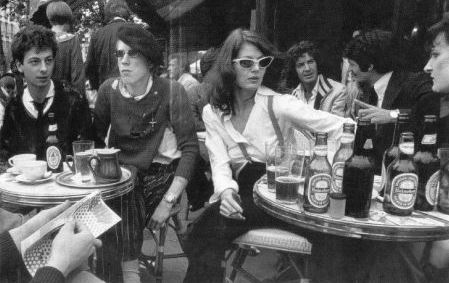