Anne Pigalle aka “The Last Chanteuse” 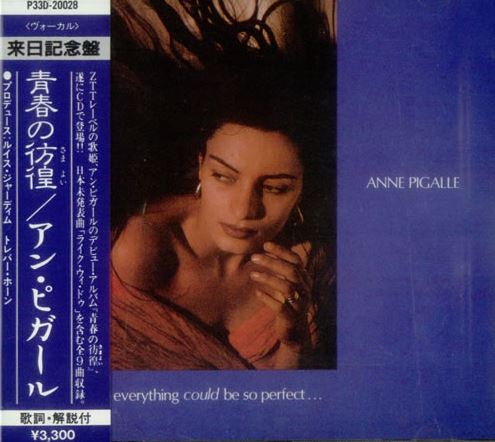 Another one of the celebrated attendees at the Sex Pistols International debut in Paris, Anne Pigalle became one of the influencers in the French Punk Movement of the 1970’s. As a young teenager in her schooldays she had performed in an all-female punk band and formed friendships with notable punk figures in Paris. With a surname derived from the famous Paris Quartier, Pigalle is also known as ‘The Last Chanteuse’, a formidable character in both the English and French sense of the word, translating to more wonderful than fearsome in French.

Her father was a jazz musician who grew up with Jacques Prévert and loved Django Reinhardt and as we might expect, the young Pigalle developed a taste for Jazz. However, she recalls listening to Bowie, but the influence of the Third Man, with Orson Welles’ face and the famous soundtrack to the film, was the moment for Anne with its visuals as well as the sound. With the emergence of the Punk scene in Paris, Pigalle was drawn to it. With may of the ingredients of a class struggle to challenge the social elite, Punk was seen to be an extension of the Parisian tendency to fight back against the bourgoise, the clergy and the establishment.

Together with the likes of bands such as Metal Urbain or Marie et les Garcons, and the movers and shakers of the music industry including Mark Zermati and Michael Esteban and the designer Castelbaljac, Anne was present at the Sex Pistols first gig at the Chalet Du Lac club. It was a night with an energetic performance with loud and clear vocals, a sight and sound that was until then, unfamiliar to the French crowd. Anne reflects on this iconic gig as a life-changing moment, saying that “when punk first came to France that weekend everyone thought it was a British thing, but when I spoke to Glen Matlock he said ‘‘No one country invented punk. It all happened at the same time’’. That made me think I could be part of this too. That we all could!”.

For a year she played at clubs and wrote singles together with the French punk band Metal Urbain. Pigalle decided to flee to London to pursue her dream.

In the early 80s, Pigalle cemented her punk status by striking up a friendship with Sex Pistols guitarist Glen Matlock (who plays bass on three songs on her new album). In the UK, she began performing cabaret, building a cult following, She also performed in clubs and recorded with Michael Nyman and Adrian Sherwood, two producers/composers highly influential in their respected fields. Anne also participated in a series of artists videos, written by Nyman, this ‘operatic duet’ was performed by Omar Ebrahim and Anne Pigalle. She went on to sign a record contract with Trevor Horn’s record label ZTT, with whom she recorded an album and a few singles, including ‘Everything Could Be So Perfect’ in 1985.

Her debut album, ‘Everything Could Be So Perfect’ is a combination of Pigalle’s theatricality and ZTT’s over the top production values. The album has divided people, which is completely intentional. Anne believes in creating music with political and social undertones to challenge people’s way of thinking.

Pigalle currently lives as a painter, a poet, and performance artist. Anne has had her artwork featured in London art galleries and has performed in locations across Soho. Pigalle states that the famous Paris quartier of the same name has itself undergone a similar transformation like the Soho where she used to live She comments how Soho had changed markedly since her time in London when she fled from her family as a teenager in the 70s to live the life of a punk on London

She has also performed and celebrated the 40th anniversary of punk in Hackney Wick called Never Mind Jackson Bollocks.

For Anne Pigalle now, she has released a new full-length album, the first in 33 years, and she has a lot to say. Anne comments that she could write about 5 books about her life, but to her, it’s important to keep documenting her story in her music. If you would like a copy, then you’ll have to purchase one from her website. Unlike in this digital age we live in, you cannot listen to it from somewhere on the internet – it is only available as a vinyl and as CDs to what Anne calls as her ‘anti-bling’ campaign. It is aimed at supporting artists like herself who do not have a big promotional budget and prevent the notable figures in the industry taking most of the profit – echoing the DIY approach to punk. She mentions how imperative this is and how it will encourage people to come and watch live performances.

The new album ‘Ectase’ is a dark, psychedelic and dangerous venture through Paris, LA and Soho, reflecting the sentimental locations for Anne that has taken 33 years to get right.

First French female to be signed by a UK Label, photographed by Nick Knight, Lord Snowdon and Mario Testino, featured in ID and Façade, Painter, poet, creative, performer and so it goes.