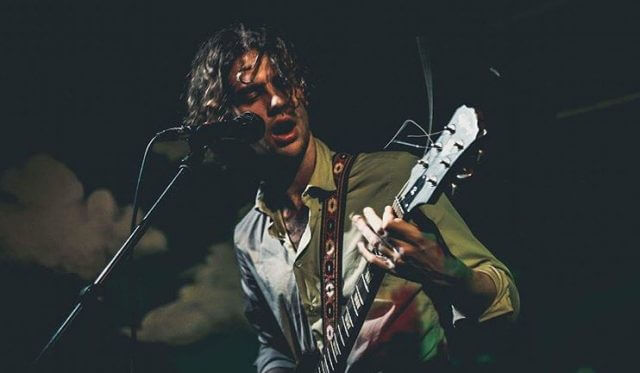 Arable Desert are a three piece from London. The band have a great new rock sound with hints of psychedelic. They are loud and exciting and are taking London’s gig scene by storm. They bring together heavy drums and fast bass lines with clever, husky lyrics, dragged over trembling guitar that could have made Jimi Hendrix pay attention. Our minds are transported to a hazy 1960s whiskey bar.

Soundwave ventured into the streets of Camden in search of Arable Desert’s set on Friday night and we were not disappointed. The band played The Crowndale club, supporting The Second Sons as part of Camden Rocks. With the daunting task of being first supports, their job was to set the standard of music for the evening, and they set it high. The way in which a band is successful in a support slot is by getting the audience to engage. You have to capture your audience’s mind for a brief moment to reassure them that it is in fact okay to stop hugging the bar or swiping through Tinder and just enjoy the music. Arable Desert succeeded in ensuring the phones quickly slid back into pockets and the natter stopped as people began to listen.

The band took to the stage under the hum of amps. Front man Ben, armed with a Gibson SG (weapon of choice) kicked off the night with their first tune. A carefully crafted wall of music made its way through the dark room, enchanting the now loving crowd. We caught up with Ben after the gig to talk influences, dream supports and new music.

What made you want to start creating music?

I started making my own music because I became tired of just learning other people’s songs on my guitar, so I wanted to create something of my own which is a totally different experience altogether, and a much more satisfying one. It is also a great outlet to have.

Everyone loves the name Arable Desert. What is the story/origin or the name?

I thought of the name when I came back from L.A. I went to the Desert over there and it was my absolute favourite surrounding I have ever been in. So I knew I wanted the band name to be something about a desert. Then I thought that a kinda idealistic desert which you can grow stuff on would be pretty cool, so that is how the Arable part came about!

On Friday you played The Crowndale in Camden supporting The Second Sons. What has been your favorite gig to date and why?

My favourite gig to date was when we supported Paves at The Victoria in Dalston it was a really great venue and it was packed out. It’s always fun playing to a big crowd of people.

If you could be on the bill supporting anyone, who would it be?

I would really love to support The Growlers. I’m super into them at the moment and love their whole vibe.

If you could choose anyone to support you, why would it be?

If I could choose anyone to support us it would be this band called Juaneco Y Su combo, they are a super cool Cumbia band and I really dig them. They wear like crazy outfits and have random belly dancers on stage, it is pretty cool to see!

Over the years, the U.K. has lost hundreds of grassroots music venues and London has been hit hard. Have you lost a venue that was special to you?

I haven’t personally lost a venue, but The Four Aces in Dalston, it’s a shame that that is not about anymore. Just purely because the history of the place, like all the acts they gave their chance to in the 60s and 70s. I would have loved to have gone there.

Your latest single, The Sweet Getaway was released late last year. What was the story behind that track? Where did the inspiration come from?

When I was writing that song, I wanted it to be a great song to have playing in the car whilst you’re driving or something. I started to imagine it being a soundtrack to a car chase and that’s where the lyrics sprung from.

Can we expect new music any time soon?

Yes! We have a new track Comiendo Moscas coming out early April hopefully!

What do Arable Desert have planned for the future?

We have a gig in Lisbon that I’m really forward too. And just playing a lot more shows in general, release more music and just kick the ass out of it!

UNDERGROUND inspires and is inspired by British Subculture, both past and present. Which Subculture has had the most influence on you?

I think most likely it would be hippies, I like how chilled they are. I think it’s a good way to live your life; not take it too seriously and just have fun with it.