PERFECT FOR: Those who are loud and proud. Our music is for the misunderstood.

WHERE FROM: Band is based in Liverpool. Our only non scouse member is Sarah

STARTED PERFORMING: Each member has been at this for years but as STONE two years. Fin and Elliot met 5 years ago and started jamming under an old outfit, played a good few gigs together before Alex joined in 2018. STONE came when they decided to begin a new project in 2019 before Sarah joined in 2020 just before COVID. We have been building, writing, and recording throughout the pandemic before finally getting to deliver our sound live after September of this year, and have plans to keep going throughout 2022. 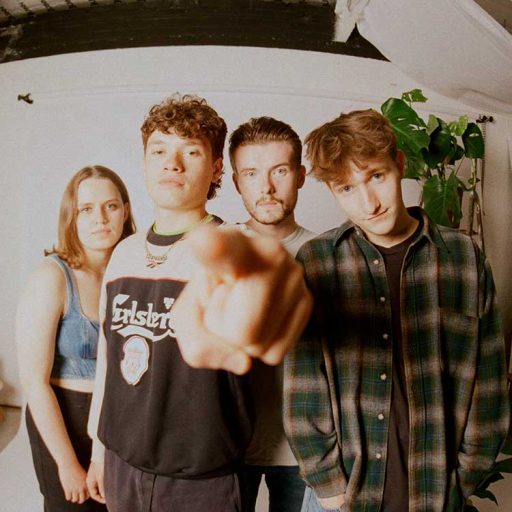 STONE are Fin Power (vocals/guitar), Sarah Surrage (bass), Elliot Gill (lead guitar) and Alex Smith (drums). In true Gen Z fashion, STONE are a diffusion of the limitless cultures and subcultures they’ve had access to growing up in the digital age. Through their music, the band hope to capture the dizzying experience of youth culture in Liverpool and the paradox of their own young adulthood as they navigate the limbo between youth and maturity.

Elliot: Scouse racket on the edge of life.

Sarah:  Bunch of Scouse boys and a southern girl here to rip up the stage & blow ur minds.

The band have many influences musically, the four of them channelling everything they listen to from N.W.A. to Led Zeppelin. The band’s sound is a melting pot of alt-rock, punk and hip-hop delivered via northern truth. Sonically, STONE like to deliver walls of noisy guitar derived from 90s Pixies/Pumpkins-esque alt-rock and Gang Of Four-style angular post-punk, accompanied by huge Bonham-style drums and punky, driving bass. Lyrically, Fin is influenced by numerous artists such as The Streets, Dave, Joy Division and many more. STONE is a brutal, honest truth delivered from the northwest.

‘Leave It Out’ was the birth of STONE as we know it… The track was a realisation that we had to stop pretending to be something we are not. The track was written during an intense and vulnerable period of change in all of the band members lives, this is represented within the tracks angst and emotional delivery.

Sarah: I’d be a house cat because they’re nice and cuddly but can also be a bitch when necessary hahahaha.

Fin: I’d be a jellyfish because they have no brain.

Ell – Some kind of mountain goat or ibex or something. Chilling on mountain tops and head butting everyone.

Ell: I think Albert Hall is gorgeous, but our dream is to play Brixton or Ally Pally. That will be a full circle moment.

Ell: Pixies – ‘Doolittle’ – I was introduced to it when I was 10 and it blew my mind. I love how frantic and esoteric it sounds yet there’s such a sense of craft which I feel laid the blueprint that inspired decades of alt-rock to come. (See Nevermind by Nirvana)

Alex: Has to be Biggie’s ‘Life After Death, something about the samples used resonate with the darker/gritty side of me. ‘Kick in the Door’ is a fave.

Sarah: Gorillaz – ‘Plastic Beach’, melancholic vibes to get me through.

STONE is a melting pot of multiple subcultures stemming from the band’s multiple influences. We are proud that we are inspired by other people’s individuality.