“When we started SB and I did the band with Dani in 2014 and 2015 I had already done underground music for 7 years with people who had no intention of leaving the underground.

I wanted to work with Dani because I could tell she saw herself as a Patti Smith type person and she really was that: everyone on the street and at shows knew who she was already. I figured she would be unafraid to play bigger shows because I knew she had already faced fearsome situations in life and succeeded.

When we started, I wrote songs for them to learn to be in a band and that were easy to play. Lyrical hooks that I thought would compel small audiences in a huge music scene in NYC and stand out.

The band was ambitious off the bat: of note we named the band after a meme so when you google search for the Surfbort meme our band would get a bump. Anything to stand out as a new band with no connections playing gigs in the hugest music scene in the country, maybe the world: NYC 2013…

Off the bat we had goals, our first goal was for our band to come up when people search for the Surfbort meme. Within the first 2 years we got more goals done including synching a song on broad city and playing with some of our heroes: we shared the stage with random but inspiring artists like Raekwon, Stephen Malkmus, and Princess Nokia, we released a full-length project, and toured to SXSW. We were ranked among the top 15 hardest working bands in NYC playing as much as 4 times a week even 4 times in a day for CMJ… I always intended for the band to go all the way and I always saw Dani as a global celebrity, I always saw myself as an artist with the smarts to make music that crosses over, like Nirvana and Hole.

The ambition was there but the missing piece for me was sobriety. I Started Surfbort February 2014, and quit February 2016 whilst in a blur; so 2 years in Surfbort ,and then almost 4 years away, and now back since Jan 2020, and coming up on 9 months sober I am so ready to show Surfbort to the world.” 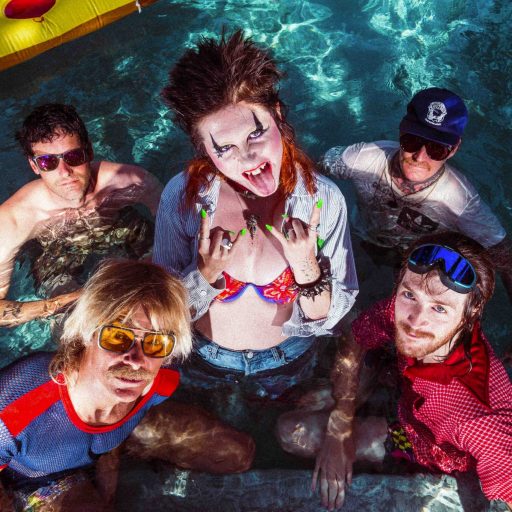 Matt: Surfbort is a femme fronted punk rock and roll band from NYC and LA.

Matt: I made up a guitar tuning based on a broken guitar I had because I wanted a sound that would cut through the variables of broken equipment and my initial lack of playing ability.

Among the first songs I learned on guitar were Black Flag’s ‘Gimme Gimme Gimmie’ and Bikini Kill’s ‘Rebel Girl’ and I was trying to sound like that when I was working on the first Surfbort songs like “on a list.”

Dani: ‘Fml’ starts with a voicemail my Mom saved from when I went to my first party at 15 and I was wheeled away by the cops to the hospital, it’s a good reminder that drinking and drugs lead my mental state on a spiraling downhill track and I’m so glad my mom saved the voicemail because when I’m at high points in life I have a reminder of why my life rules and is magical when I stay sober and mindful.

Matt: Slushy is about NYC snow from an LA perspective and it’s supposed to sound like “The Cure”, like a sad smitten man singing, but it sounds cool and sweet when Dani does it… “every time we go to the store you always get a candy bar you always get a soda pop, I always get a beer, she likes me that way, slushy don’t go away…”

Sean: You think it’s going to be a terrible day, turns out you were right! No big deal. everything ends up being ok anyways. Keep on truckin’ forth!

Dani: I was a Pony but now that Danny Moon dyed my hair rainbow, I’m now a unicorn.

Sean: I choose the Platypus!

Nick: I’ve only been to the O2 arena, maybe we’ll play there someday????

Alex: Beatles one got me through pandemic with my 3 year old daughter Panther.

Matt: Without a doubt our new record. I love listening to it. It was speedy hardcore punk inspired songs: Stonesey, Stooges moments and Dead Moon moments. Sweet moments and creepy moments. Dani is my favorite singer and lyricist, Sean is my favorite songwriter, Alex is my favorite guitar player, and Nick is literally my favorite bassist in all of music. I love every note he chooses. I’m writing and playing better than ever and I’m only contributing music that I want to listen to and nothing else. When me, Alex, and Nick are alone together we cover Dead Boys and New York Dolls and when I’m alone I listen to pretty much only duster and I feel like it’s all on this record. Dani and Sean are geniuses and they made the artwork and I could look at it all day. Holly Silius made the mask and shit show Dave shot the photo. it’s not only the best record I’ve ever made, it’s the best record I’ve ever heard. Dani has the best voice, and the words she wrote and Sean wrote are literally what the world needs right now. Unafraid to be kind but unafraid to fight, unpretentious, poetic, but campy and aggressive, and loving and peaceful. I really feel it’s the best possible record that anyone on earth could make for where human society is at in 2021 and I think the aliens need to hear it.

Dani: Hell ya !! Club Kids scene in New York was so epic

Alex: Yes I grew up in the subculture that saved me and ruined me

Matt: I’m a punk so yeah but don’t let your subculture ruin your life! Lots of dead punks, rest in peace. Die old, we need you here, let’s stick together.

Nick: Yes, definitely! Surfbort’s shows have always been a communal celebration of otherness. 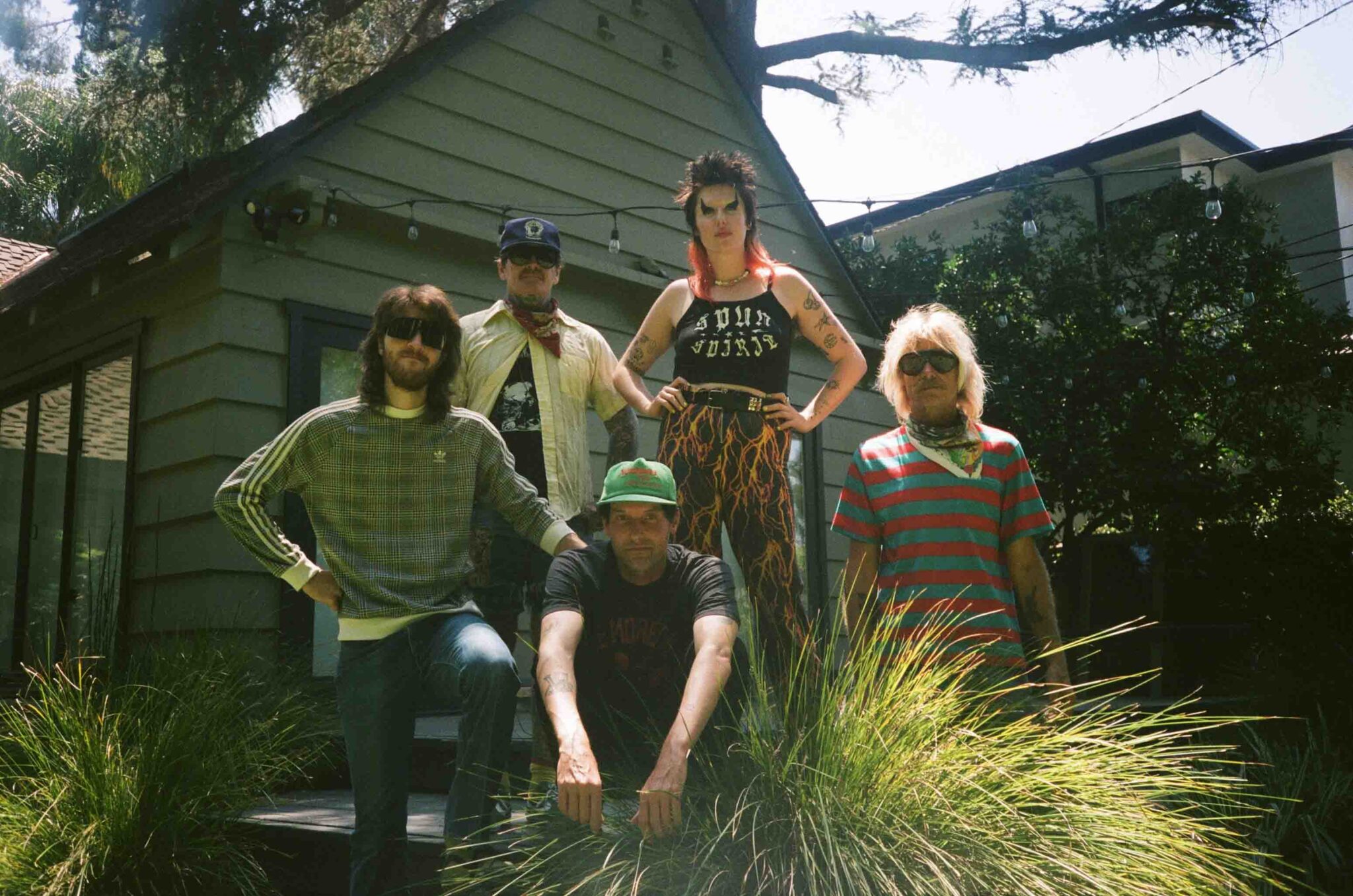 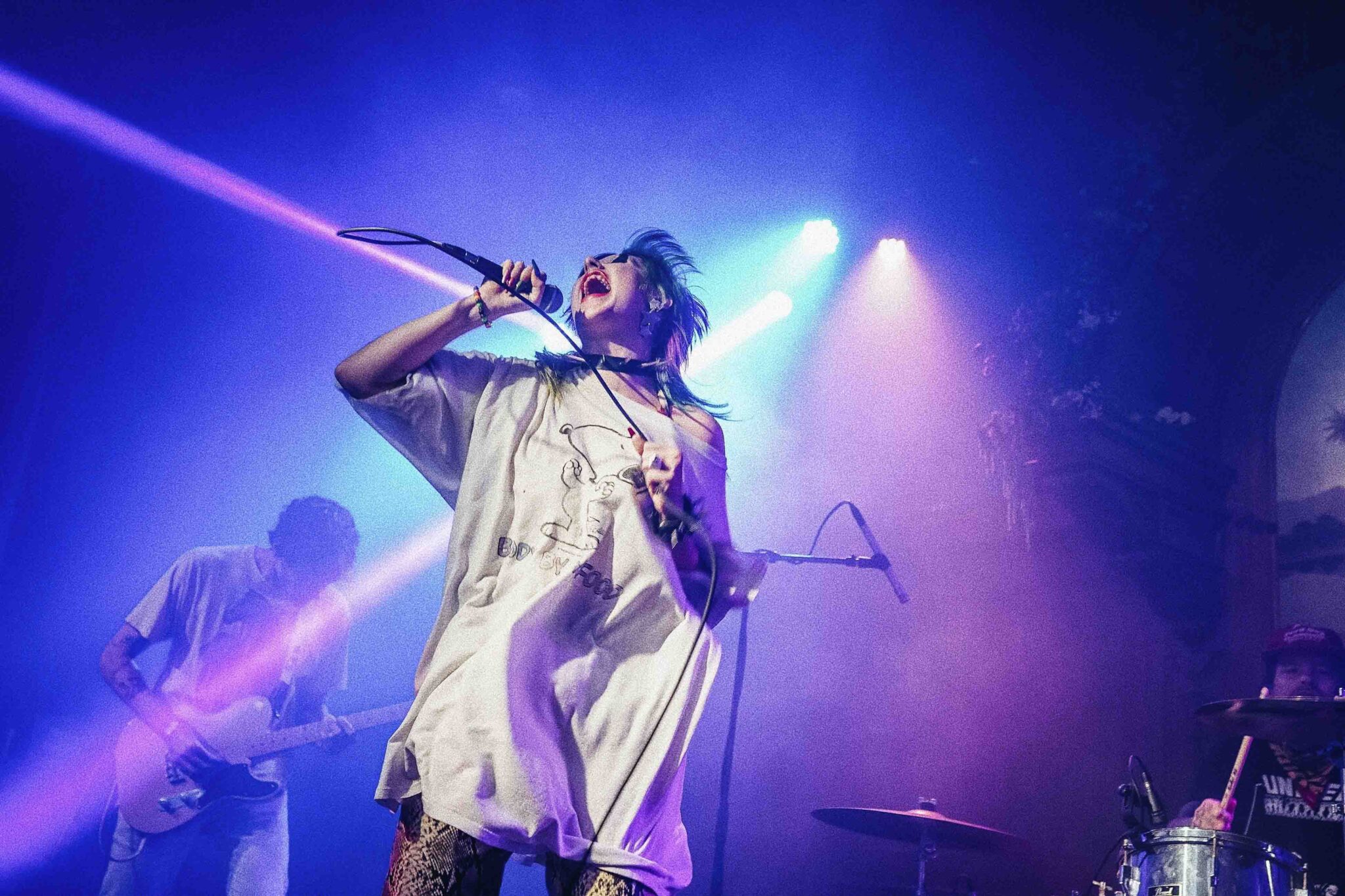 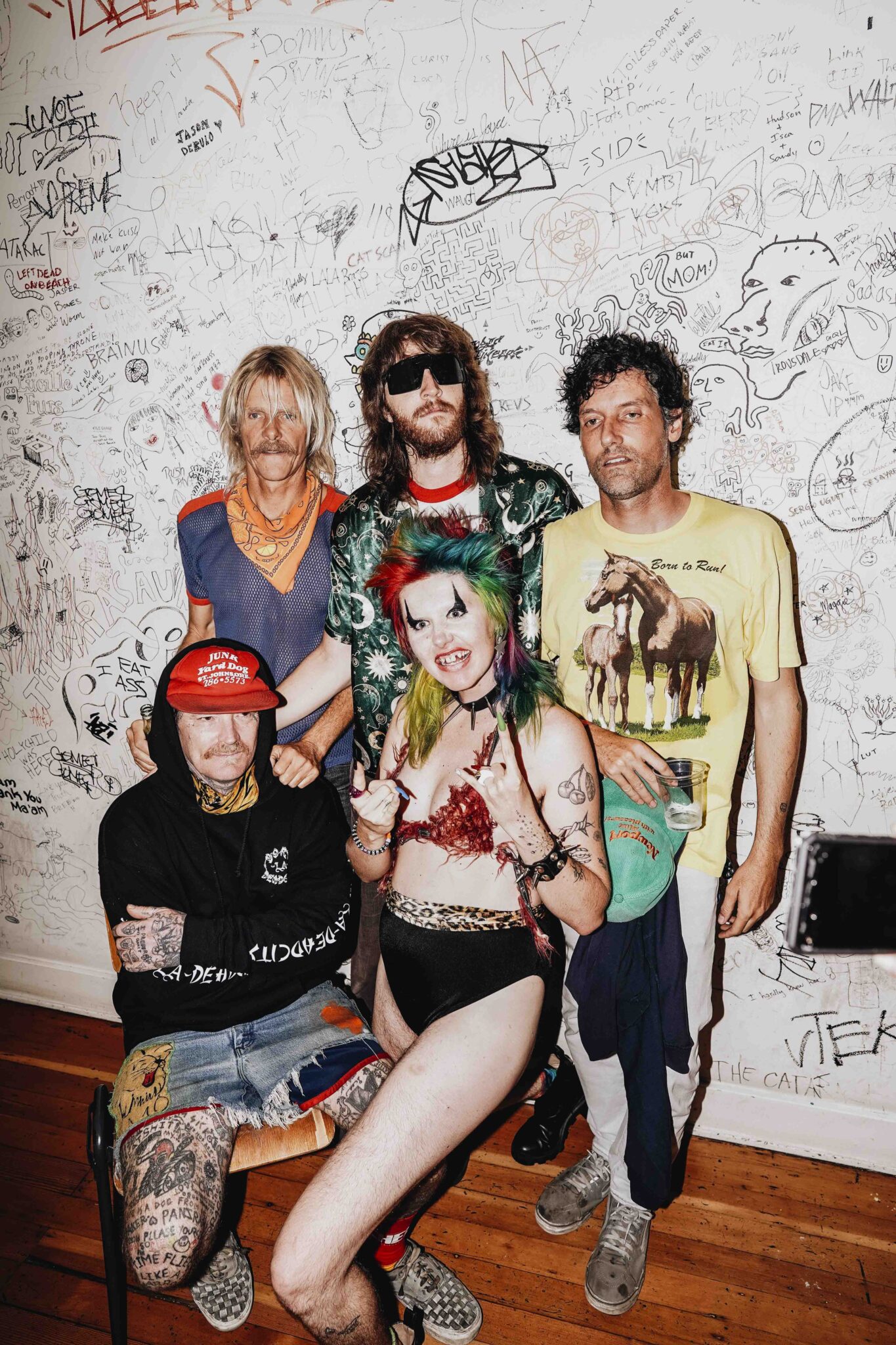 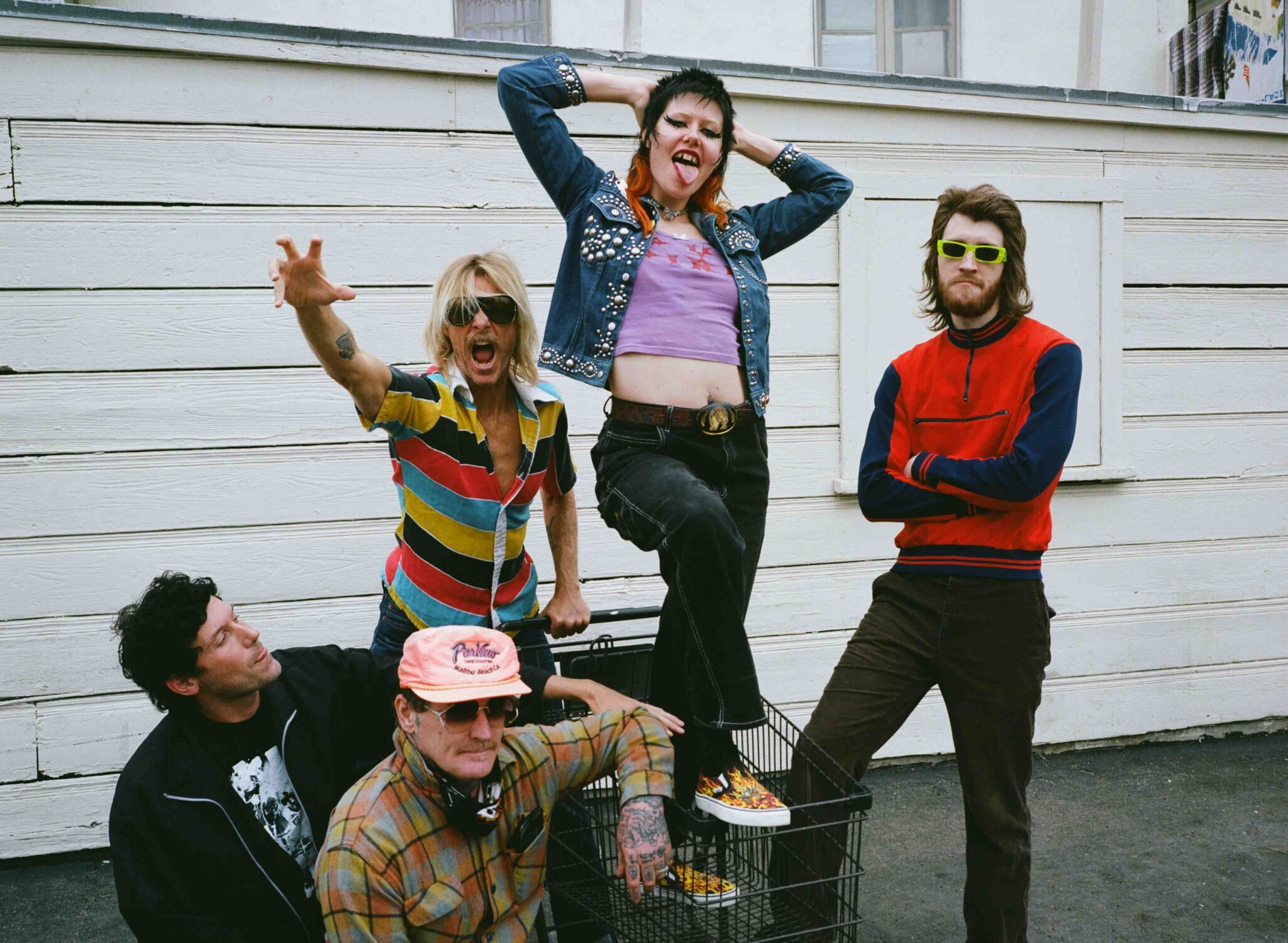