Club-influenced post-punk perfect for those wanting to be challenged, as well as dance.

Vlure defy the rules, they rip up trends and create new ones. With a certain honesty and a vulnerability, they confront you and get under your skin. They make you feel things, the way music should. The Glasgow five piece blur the lines between live electronics, jarring guitars and the performance sensibilities of their post-punk contemporaries. Synth laden hooks and heavy club influenced rhythms find their way twisting around emotionally confronting lyrics. With tear filled eyes and penanced chest pummelling, their dedication to audience engagement, presents itself in an intense, yet life affirming live show. 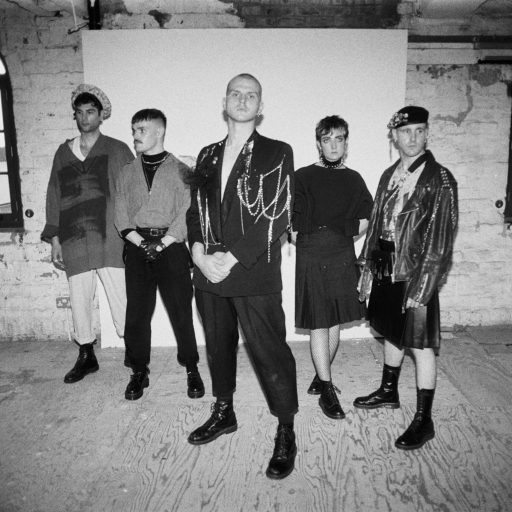 Conor: A 3am cardiac arrest.

Carlo: We only play the bangers.

Over the past 18 months we have been listening to a lot of genre-crossing artists. Artists such as Massive Attack, D.A.F, Burial, Faithless, FKA Twigs, Bjork etc. Digging into the sample-based production of the likes of opposing forces such as Liam Howlett and Grimes, and applying that to the foundation of the cold, angular post-punk that we started with has been extremely liberating.

‘Shattered Faith’ was recorded between a deconsecrated church in the Scottish Borders, and in our studio on Glasgow’s Clyde side. We recorded the bones of that session on Conor’s broken 2012 laptop that crashed every time we put down a vocal take.

Conor: A wolf. I move with purpose, but always stick by the pack.

Hamish: A staffy. Intimidating to look at but loves a cuddle and ever so loyal.

Niall: A grouse. Loves a stoat.

Alex: An owl because I never sleep.

Music for the Jilted Generation – The Prodigy.

Alex works at St. Luke’s in Glasgow. A beautiful space.

Yes, subculture is at the heart of everything we do, and who we are. As individuals we find nothing more inspiring than pushing cultural boundaries and redefining, in our own modest right, societal norms.