Doom punk perfect for anyone and everyone that loves heavy, riff driven music & angry vocals!

We met and formed the band about 5 years ago after we had all moved to Manchester to study at university (Alex joined about a year after). The band wasn’t started with any genre in mind, and it took us some time to find what style of music we wanted to create but we’ve always resonated with heavy riffs and over time the term doom punk seems to fit us best! As individuals we have a very varied taste in music which clashes together to create our “sound”. Witch Fever has become a tool of catharsis for us all to express ourselves, especially through performance and we’ve learnt to utilise our anger and channel it into our song-writing. We want to show that it is acceptable for women and non-binary people to express themselves and feel heard! We have been fortunate enough to recently sign with Music For Nations and are in the process of releasing our first EP called Reincarnate (out 29th Oct) and there’s an album coming out in 2022!!

Witch Fever are Amy on vocals, Alisha on guitar, Alex on bass and backing vocals, and Annabelle on drums. 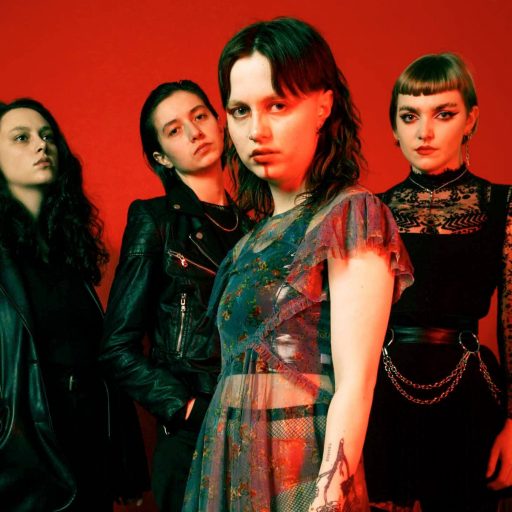 We all have such varied music tastes so it’s really hard to pin down specific influences! The following is a list of a few bands/artists that influence us in all sorts of ways: Show Me The Body, Nirvana, Warpaint, Chelsea Wolfe, Dana Dentata, Angel Olsen, King Woman, Hole, Little Simz, Black Sabbath, PJ Harvey, Savages, Pussy Riot and Trash Talk.

Due to the lockdown restrictions we weren’t able to write together, so we basically had to record tracks from separate houses with Annabelle pulling it together on Logic to mix them as demos. This is how we wrote ‘In the Resurrect’, so when we had to record it for the EP we had barely played it together. It took us a really long time to solidify playing it live!

Alisha: The Fool by Warpaint

Alex: Shadow of Heaven by MONEY

Of course! As a band we’re all inspired by loads of different things. Goth, punk, post-punk, nu-metal, grunge, and skate culture to name a few. It’s interesting to watch how subcultures change over time and it’s exciting to be a part of them!