AWAYDAYS- You won’t find that in the dictionary

Football if you didn’t already know, was once the preserve of the Working Class, with a kick off on Saturday at 3pm that allowed the factory workers an afternoon off on a six day working week. When the current game emerged in the late 19th century it was the British rail network that assisted the rapid growth in match day attendances.

The railway network laid on special trains on match days not only for supporters making a local run but for the fans that wanted to travel across the country to follow their colours. 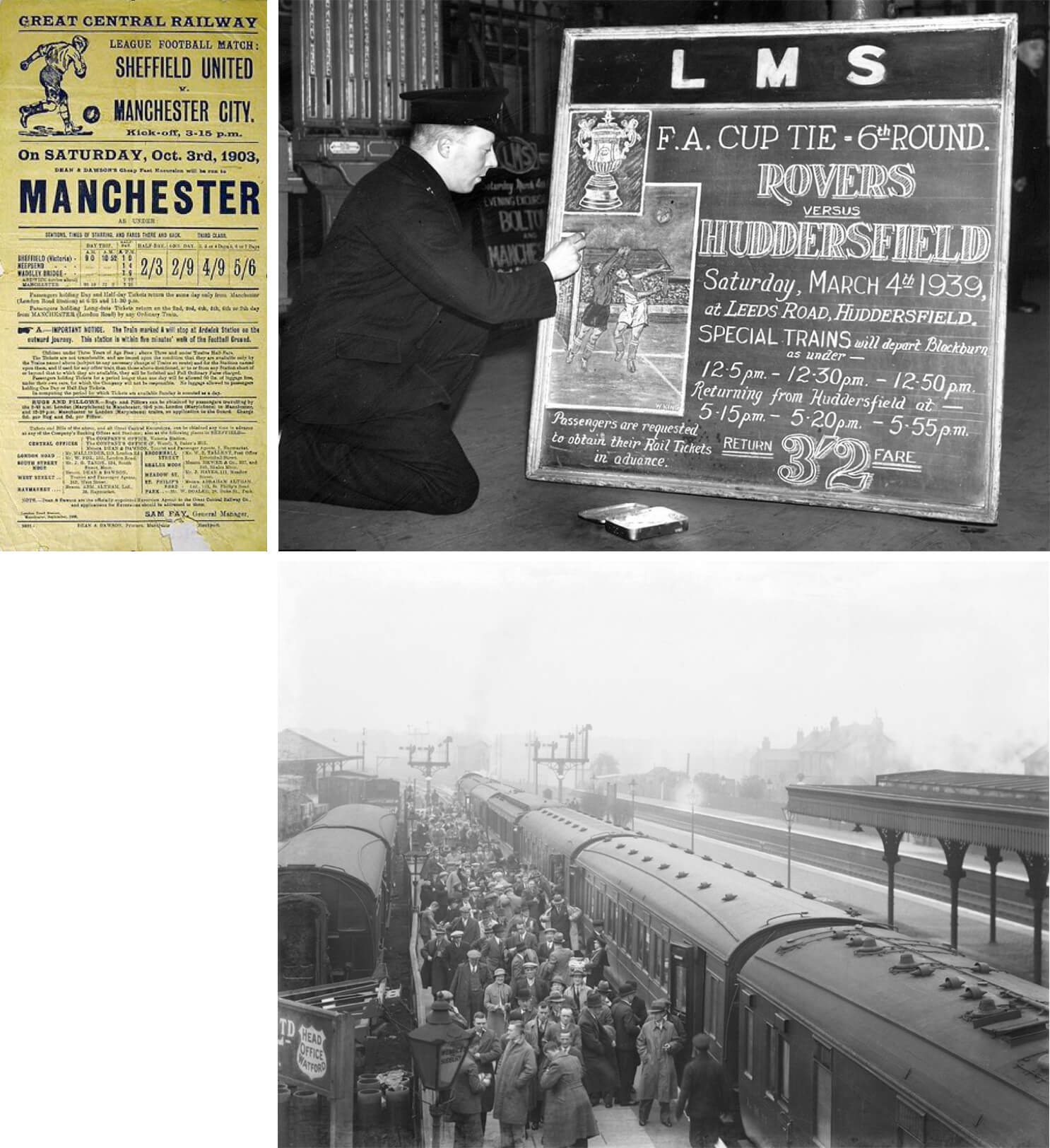 From trains making the shorter run from Blackburn to Huddersfield to the “Football Specials “laid on for the long distance from the North to Wembley the train became the way to go.

Those “Golden Years “ of football in the 30s 40s and 50s ,that sort of glistened through the smoke from the factories that butted up to the football grounds and the smoke from the fan laden trains, made way for a newer game in the late 1960’s. The general cultural shift of the 1960’s had given youth a bigger voice and an independence, and that was coupled with the advent of the “sexy game “ –that is the arrival of players like George Best or Booby Moore, whose on field skills were supplemented by their sense of style and lifestyle off the pitch. The game started to change for the younger fans and most notably with the rise of violence between opposing supporters. 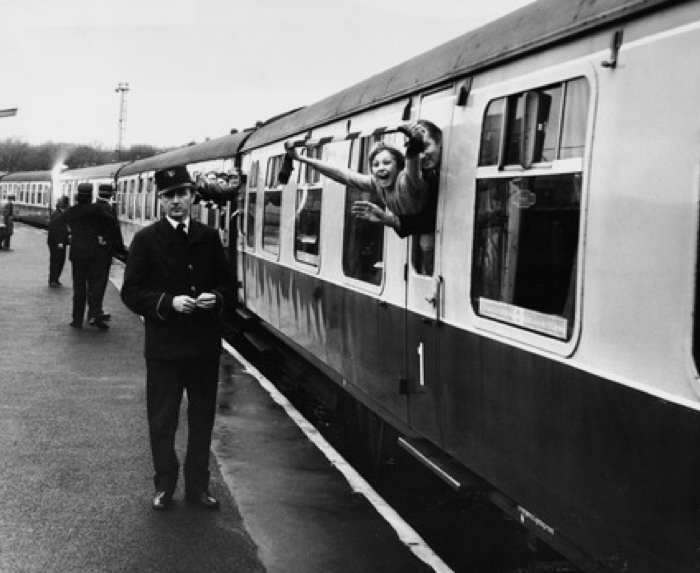 Tribal and territorial, the fans were up for travelling across the country to fight for their colours. The football specials that were shifting the legions of fans across the nation on match days in the 1970’s were an unwelcome business prospect for the rail network. Using the abundant stock of semi-retired train carriages the “football Specials “were a necessary evil for the Police and the Rail network. Even when the “Special “did pull up at Manchester Victoria, Liverpool Lime Street or Bristol Temple Meads spilling out hundreds of supporters with echoey chants about “the Scousers “or “coming to Yorkshire to kill the Ripper “, the Police had them in their sights and could at least attempt to keep them under control as they made their way to the ground, ostensibly for the match but more likely for a faceoff with the home supporters.

By the late 1970’s the football supporter had become an altogether different character than those on the terraces in the decades before. The travelling fans were becoming “Casual “- wearing “clobber “that was a complete paradox. The mainly working class kids were decked out in Sportswear that would have looked more at home in the Tennis Club or Golf Club than a Football club in the terraced house part of town. Gone were the scarves and in came a newer kid who knew his way around and knew the score. 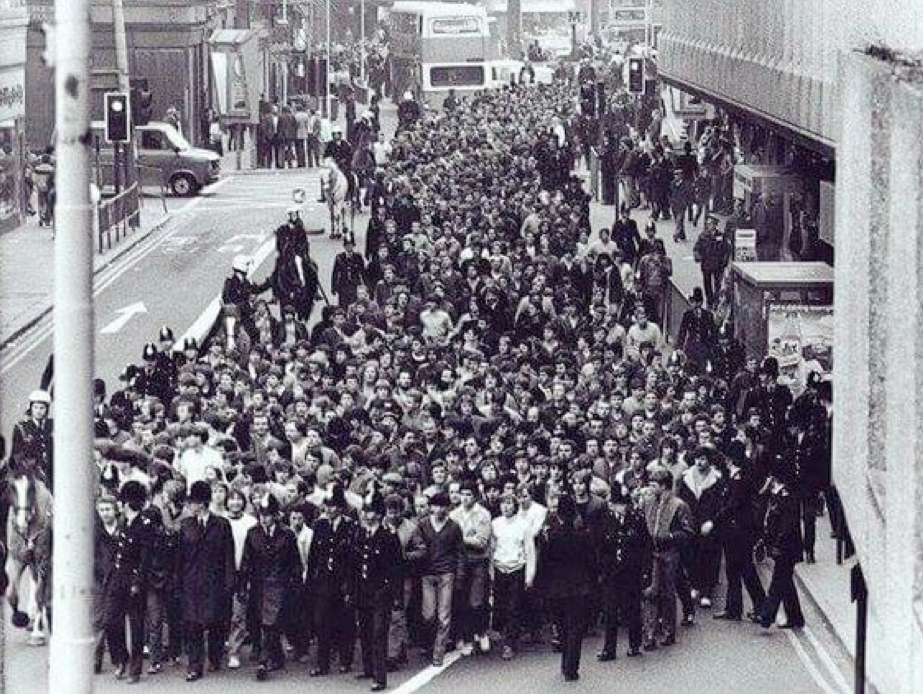 A POLICE ESCORT FOR THE FOOTBALL SPECIAL

The “Football Special “wasn’t for them. The Football Special harked back to the “Golden Years “of scarves, bobble hats and rattles. What to do? Luckily British Rail was running its promotion to encourage more use of the trains and its “flagship “promotion was the “Awayday”. Cheap travel, mainly on off peak times and days to travel up and down the country. The target market was the family off up to Chester Zoo for the day, the elderly couple off to see the grandkids in Gateshead or the punks heading up from Somerset to Kings Road. No one had thought about the Football supporter. Saturday was their day and the Awayday? – Well “Yes please a return to Birmingham New Street – £8 –nice one “.

So the British Rail campaign to get the population back on the tracks was a particular success on Saturdays. Clued up Football Casuals were buying the Awayday ticket and avoiding what had become the over policed and over regulated football special. No need to travel on a 1950’s carriage when you could take the 125, and avoid the police escort at the destination station. The Police and the rail authorities were oblivious to the trend at first, unable to recognise the “football supporters “who had shed their scarves for golf and tennis attire. It was only when the groups of football casuals descended on a regular service train, Awayday ticket in hand, and looking like an advert for Lilywhites got bigger, almost flash mob size before flash mob existed, that the authorities finally figured it all out.

So the term Awayday passed from a British Rail promotion to a signifier of a Football Casual avoiding the confines of a football special. A classic re-appropriation of a common term that is so familiar in sub culture and much loved on our pages- you know what we mean “ we like that , we want that, but we are going to use it for something different “

Awayday today just conjures up the image of the football crews making their way across Network Rail from county to county on a Saturday and any other day that the TV rights schedule dictates.

Just look at these logos from social media that are the emblems of sites with a love of the game.

Awayday- the dictionaries still have it down as a special promotion ticket- it’s like the dictionary writers are all ex-cops or ex-British Rail- they still haven’t really sussed it. Everyone knows apart from them what it means. 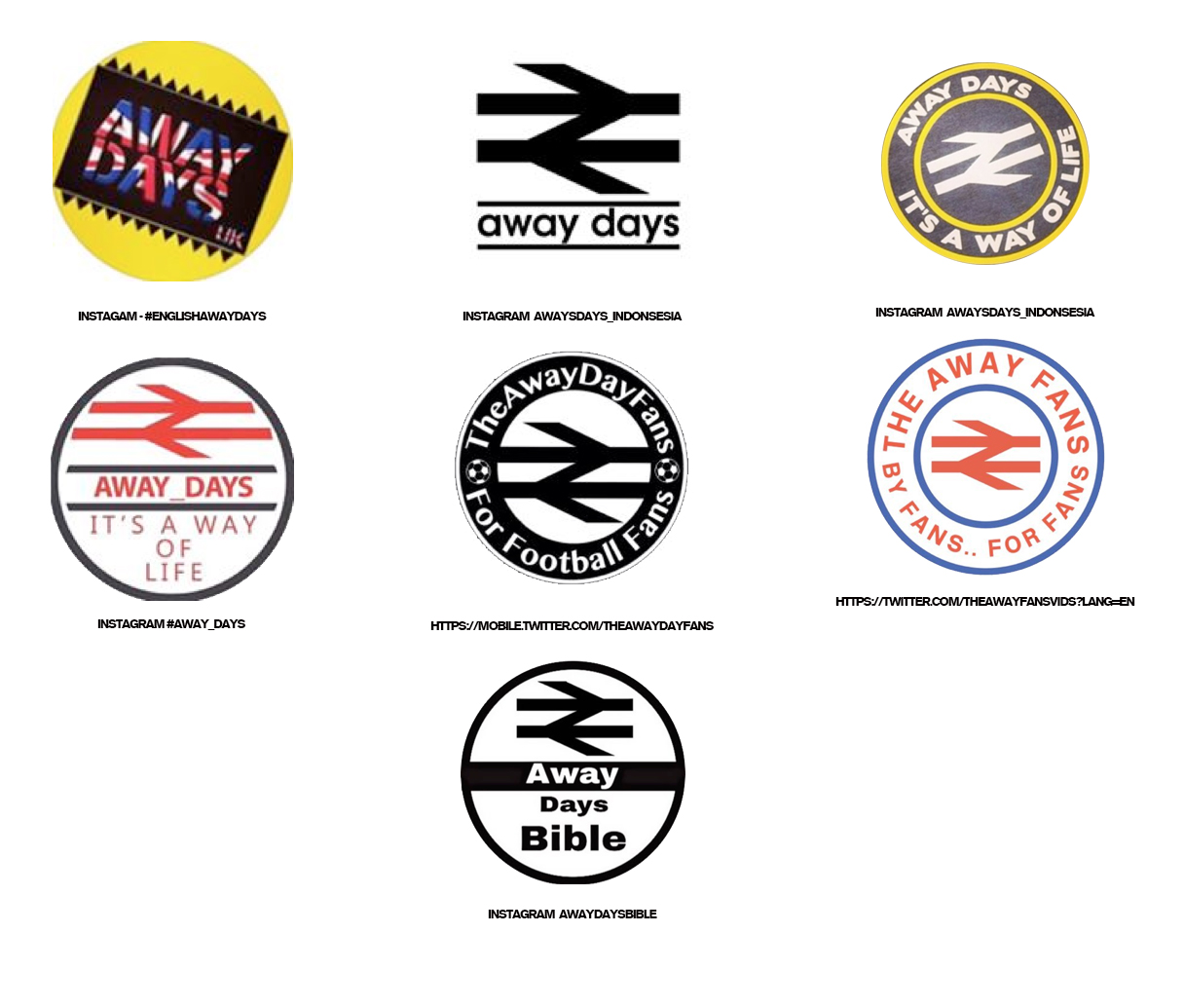