Band of the Month: Black Honey 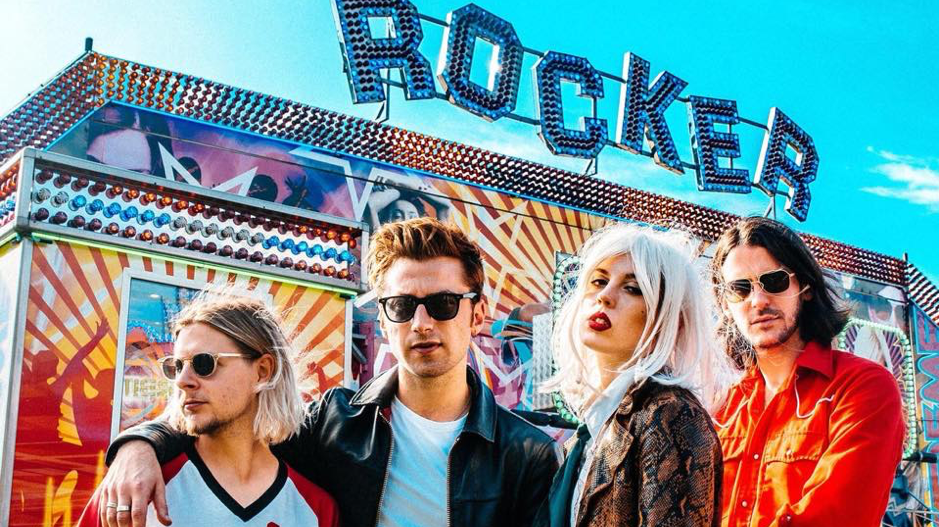 As summer finally hits the British terrain, music lovers from near and far are looking for that special someone to soundtrack their summer. Underground have done some looking, so you don’t have to, cue Black Honey – the band of your summer.

As a band that needs no introduction Black Honey may have been on your radar for a while now. Nonetheless, they are back this summer with a new single since the release of their debut album last year and we want to shout about them.

Having been together since 2014, the Brighton bred foursome have made their spangling presence known through cinematic tracks and a picturesque aesthetic. Like the love child of David Lynch and Quentin Tarantino, Black Honey embody the theatrics of a neo-noir film in sound and look. Made up of Izzy B Phillips, Chris Ostler, Tommy Taylor, and Tom Dewhurst, each member oozes with cool and started their musical journey as they mean to go on… full of flare. Mixing grunge with spaghetti western motifs, their debut tracks ‘Spinning Wheel’ and ‘Corrine’ were the perfect portal into Black Honey’s twistedly delicious universe.

Since their conception, Black Honey have continuously pushed the boundaries of genre with their ever-growing Filofax of inspiration and reminiscences. Their debut album Black Honey is the perfect manifestation of the foursome’s extensive ability to combine musical tropes from a range of eras and styles and mash them together into luscious lyrics and sultry sounds. From squalling guitars to major auto-tunage, the album moves like water through a spectrum of sounds that see tracks similar to Lana Del Rey sit seamless between disco and garage-rock numbers.

Like 70s does 90s in the 21st century, Black Honey balance on that fine line between pastiche and gimmick, bringing a new life to nostalgic fashions and wear them like they’ve never been worn before. And with creative control over everything they do, it should come as no surprise that their captivating sound comes with an equally hypnotic visual identity.  Taking inspo from cult films and melodramas, their sound and style see rebel femme fatales take centre stage in some diner in the middle of the desert or a dreamscape motel.

Shining up their platforms and pulling up their flares, Black Honey are both who you want to be and who you want to be with. And with their newest release ‘I Don’t Ever Wanna to Love’, this is revealed as an unchanging feature of their character. Cinematic as ever, the new track is another op for you to listen to it and pretend you’re the lead sipping from salt rimmed cocktail while slinging around your pocket revolver.

As suspected the accompanying music video is another luxurious dip into Black Honey’s pool of fun. From a paisley 60s overcoat to the idealistic hotel backdrop, the videography drips with a finesse that would make Wes Anderson proud. Captivating its viewer with outfits that coordinate with the setting and stylish cutaways to the band in matching suits, the video works with the track in way that’s true to Black Honey’s house style right down to the powdered wig.

Full of paradoxes the track covers the pain of falling for someone and lusting after the unattainable until you don’t ever want to love again. So, forget the summer of love you had lined up and get embracing Issy B’s mantra: “I don’t ever want to love”. Commenting on the track front woman Issy B told DIY Mag that the track is “a portal into the world we have been living in with beautiful Motown beats and retro rock and roll. I feel and mean EVERY word.”

Passionate and uncompromising, Black Honey are a powerhouse of a band who put their blood, sweat and tears into their art — that’s what makes them so mesmerising. Being unwavering with their individuality Black Honey shows that there is no room for complicity when it comes to music. As propagators of independent music making, the quartet are undoubtedly an inspiration for anyone with the urge to start making music for themselves. Now in what they mockingly call the “big boy game”, the foursome meddles in the big league with the intention to give people a good time while ripping apart outdated systems.

Having already started this summer playing festivals over-seas, the season looks like a hot one for Black Honey. Let their anthemic tracks whisper sweet nothings in your ears while you sit poolside or be the backing track to that dirty-good night out where you order one too many tequilas… we’ve all been their right? Whichever way you choose to indulge in a taste of Black Honey, know that it’ll be sweet joyride that’ll be stuck in your head all summer long.