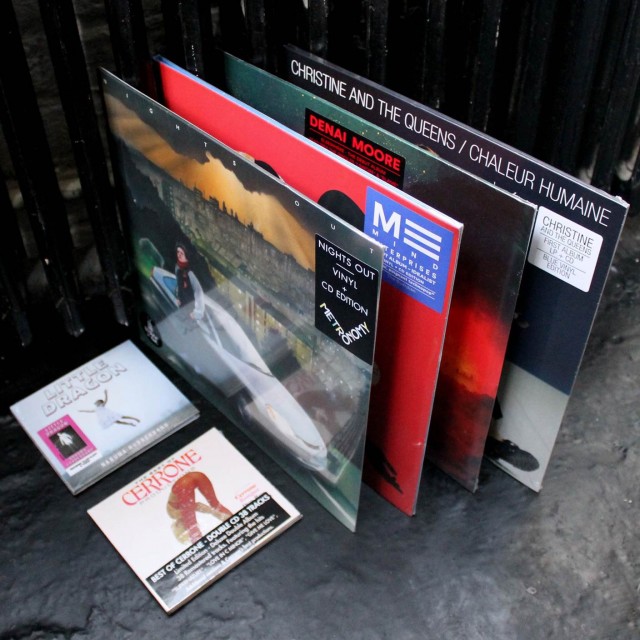 We know how lucky we are at Underground to have friends in some amazing places. One of our dearest creative and cultural matches is the independent record label Because TV. They’ve got radars set up on both sides of the channel to detect the best in new indie, alternative and electronic music. Just last week Underground were treated to a choice selection of vinyl and CDs from some of the labels most exciting artists. We’re going to wiz over this musical goodie-bag so you can embellish your own collections!

Before we introduce you to some of the new kids on the block we need to make sure you’re familiar with some of the labels leading groups. Metronomy have been on the scene for a while, managing to maintain their position as an essential addition to any indie playlist or E4 series soundtrack of the last few years. Their Nights Out album from 2008 is an electronic embodiment of it’s title. Buzzy, electronic build up to the moments of madness and joy on the dance floor it covers all nightlife antics, but perhaps more of graceful, low key affair. In true indie style, it’s effortlessly cool. Another well known artist signed to the label is Little Dragon. Because TV have put us onto her fourth studio album Nabuma Rubberband, it’s loaded with subtle sonic wonders that haven’t aged a bit since it’s release in 2014. By no means is this a wash out, melancholic album. Though gentle it is rich and soulful, exciting and confident in it’s own delicate charm.

It’s no surprise then that Because TV have gone on to sign Christine and The Queens, a band who share this glimmering, enchanting production quality. You’d be forgiven for not having heard of this group before, but it would be hard to forgive you for not checking them out immediately. French synth-pop might not sound like something you ever thought you’d want to explore further, but believe me, you do. ‘Chaleur Humaine’ is the debut album from a truly remarkable young woman- Héloïse Letissier. She’s toured with Lykke Li and Wooded, collaborated with Perfume Genius and has recently appeared on BBC Radio one, performing a stunningly live session for Huw Stephens. Minimal, delicate synthy-beats flurry around each track with Letissier’s sweet vocals creating something which feels very beautiful and new.

Denai Moore’s album Elsewhere brings something entirely different to the table. Inspired by folk, indie and R&amp;B her vocals are strong and sweet, a unique blend of soulful vocals and distant, rumbling drum beats. Moore has already got Plan B and Tom Odell on board, both artists are big fans of her work and, like us, anticipate some great things. The final name we’re pushing on you is Mind Enterprises- and it makes for a pretty grand finale. A romantic, playful approach to electro-dance music the sound reflects the brilliance of the brain behind it. Andrea Tirone has received endless praise for his skill in composing and producing music, the track Chapita stands out as everybody’s favourite. His slinky-poppy sound will take him far so keep your eyes on this space.

Tapping drum echoes and intricate, sinister guitars form like a mist for an agonising 3 minutes before vocalist Peter Murphy sings of dead flowers and black capes; lyrics of “the bats have left the tower, the victims have been bled” reading like the most sombre poetry of Edgar Allen Poe. Taking its name from the horror film actor Bela Lugosi, renowned for playing Dracula in the 1930s, with a record sleeve showing a colossal bat from the 1929 film ‘The Sorrows of Satan’, Bauhaus’ first release was a sensory assemblage of all that Goth would go on to represent. “Bela Lugosi’s Dead” was immortalised forevermore as a Gothic apex when a live rendition of the song was featured in the opening scene of ‘The Hunger’, a 1983 erotic horror starring Catherine Deneuve and David Bowie as vampire lovers.