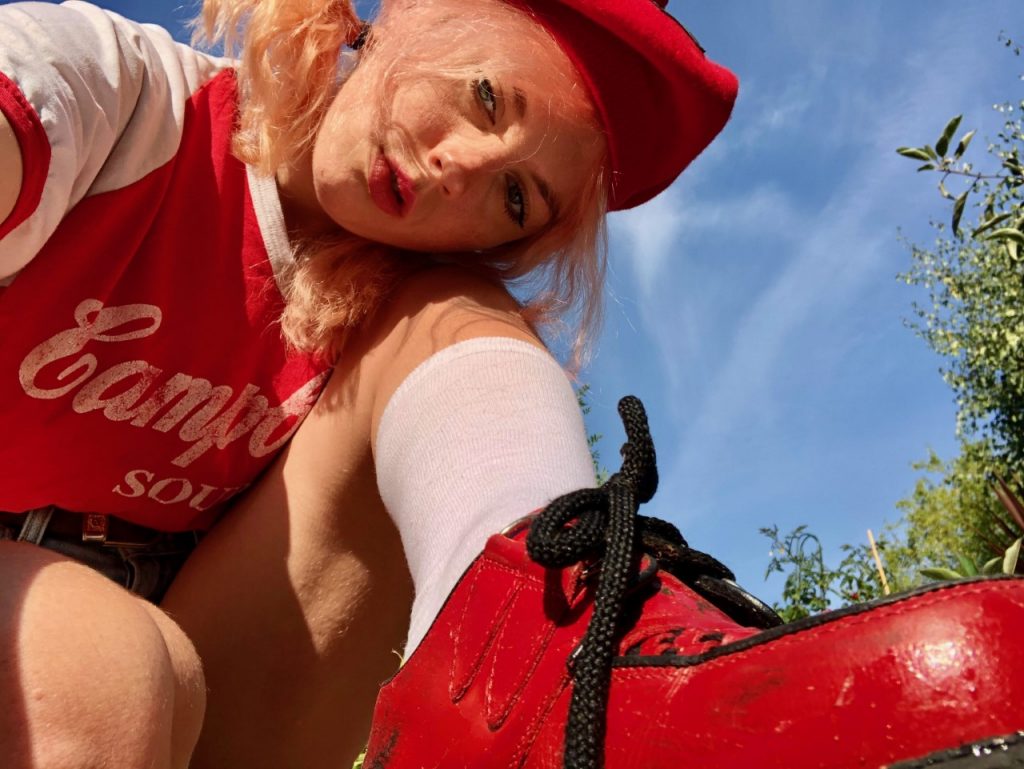 Two years after the release of their debut, Black Honey are back in business, more rebellious and bolder than ever. Releasing their single ‘Beaches’ back in July with a second single ‘Run for Cover’ round the corner: frontwoman, buzzing Izzy Bee Phillips chats to Underground.

How would you describe your music for people that don’t know you?

Black Honey is a Taratino movie whereby all the lead characters are underdog, feminist, non-binary, trans and they are reaching their peak of empowerment and finding their more intricate selves and exploring their weaknesses and vulnerabilities, in parallels with their strength and beauty.

We love the new single ‘Beaches’ – when we can expect more music?

Can you tell us more about how the video for ‘Beaches’ came about?

The first video was meant to be filmed on a beach in Ibiza which obviously fell through because of Covid, so the only choice I had was to do the home booth/comedy video idea. Starting the portrait series was fun because I liked playing all the characters in it and then we got carried away from there. We realised half-way through making it that it would be something really easy for everyone else to recreate, something really fun that everyone could do in quarantine and feel connected to what we are doing. The fan video is actually bigger than the one we did, I think we should just get everyone to direct our videos for us from now on because everyone seems to do it better than we do.

How does the new album compare to your debut?

Our music in general is rock music, we’ve explored loads of other stuff before, but this album is Black Honey on steroids. It’s quintessential, it’s retro Rock ‘N’ Roll in Pulp Fiction, with all those classic heavy riffs and sounds. It’s got all the macho egotisms like retro Rock ‘N’ Roll in the 70s, except this time it’s told from the perspective of a woman, with all the intricacies in it.

There’s a song on the album called ‘I Do It To Myself’ and it’s self-deprecating as ever. I think now we live in a time where women should be explored as more than binary concepts like ‘if you’re a frontwoman you’re either a sexy heartthrob or you’re a damsel in distress’ – no. I have masculine and feminine ribbons in me and I don’t want to be the sort of artist who is confined by binary narratives anymore. That’s not to say I identify as non-binary, it’s just to say that women can have diverse perspectives where they are angry, passionate, vulnerable, sweet, everything: they’re complex and intricate. It’s the lead character in every white man blockbuster that we’ve been watching for the last millennia be recycled.

Any funny stories from writing or recording the album?

We made the record with this crazy French guy called Dimitri [Tikovoi], he’s quite famous for some old school bands like Placebo. I love him because he does stuff in really obscure ways, this one time he had to record a string section, and instead of doing the symphonic orchestra recording where you get an individual mic for every part and spend on a long time getting the sound right and stuff, he literally recorded the whole orchestra with one microphone which I just thought was absolutely mental. If one thing went wrong, the whole entire budget would be blown in that one take.

He also had this idea to record vocals with a contact mic which is basically like holding a plaster, but he made me put it on my throat, so the sound just sounded mental, like how your voice sounds in your head with all of the resonance of your neck. He’s just such a lunatic, the way he does things are so out of the box. One day in the studio he just whipped out a samurai sword and opened his Amazon delivery box. He opened his dyson hoover with a huge samurai sword wearing a Nicki Minaj mask that he kept in his drawer of masks, he’s just an absolute lunatic.

How would you describe your style in three words?

Retro, bad-ass (if that could be one word that would be great) and pop-art. I like to feel like a character from a film.

What influences your fashion style?

I used to work in Beyond Retro when I was younger and I got really into the idea of how well things were made in the olden days. Now, always for me it’s like a game of trying to find something I think is really unique and special. I love colours, block prints and Wes Anderson movies and classic Rock ‘N’ Roll iconography.

Are there any subcultures that influence your style?

Being from Brighton, the whole mods and rocker thing is so engrained in our culture it would be hard to not reflect and be part of it somehow. I find the 60s, Biba era interesting, which is maybe more of a cultural thing, but I love punk as well, I studied punk as a kid. For me it’s very much of case of eclectically cherry-picking from all of these different cultures which I feel like are somehow part of what make me, but not necessarily be a subscriber to one tribalist concept, I’d rather make my own. I customise stuff a lot too, I’ll get a dress I really like, edit and re-sew it in a way that I like it or I’ll design stuff and get someone to help me make it. I can’t use sewing machines as I always break them, so people I do clothes stuff with are very helpful, like my mum.

Do you have any guilty pleasures?

All of the pleasures that are described as guilty are probably the best pleasures of all. I love gardening, that’s my pleasure that I discovered in lockdown that I didn’t realise that I liked it so much. I just dig up my mum’s garden and plant stuff in it and make a mess. I have no idea what I’m doing, I just make a mess of everything but there’s something about touching stuff with your hands that feels really grounding and helps me get back to myself. My obsession started with cacti in the conservatory and then it spread from that to houseplants and trying to make a jungle in there. I got into planting bulbs in spring and planting loads of daffodils. I like sunflowers, big statement ones, like banana trees. I want to get a banana plant and put it in the garden, like palm trees or anything that makes you feel like you’re in a magical jungle.

What music have you been getting into recently?

During lockdown I made this isolation collaboration playlist with our fans, they put on so many good songs which was such a nice awakening into songs that I didn’t know existed. A lot of them were female artists; Arlo Parks was one of my favourite discoveries. I also got really into the indie band Sorry and Willie J Healey as well. Recently I’ve been trying to learn about the trans music community and things that are more authentic than just some white dudes moaning.