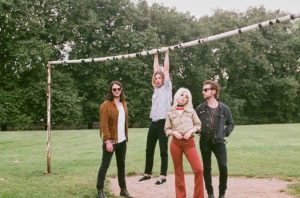 BLACK HONEY- the Indie band from Brighton on the rise and rise and consist of Izzy Baxter, (vocals, guitar) Chris Ostler (guitar), Tommy Taylor (bass), Tom Dewhurst (drums). We caught up with Izzy for a bit of background and an update.

How did you meet each other? What inspired you to make music together?

We were all housemates, so it was really natural for us. Aside from that I was inspired by the guys determination and love of music, I could really relate to that.

What is a typical day making music like for you?

Really varied sometimes it’s me playing guitar in my knickers to drum loops watching Wes Anderson movies. Sometimes long hours of recording sometimes structuring and rebuilding ideas in the studio with the guys.

Who/ what were your influence and inspirations?

It’s like we cherry picked contradicting sounds from different eras of Blondie, The Beatles, Post Punk, Warhol and pop music then stuck them together with glitter glue to make a Tarantino movie soundtrack.

You been playing in so many venues and festivals around the world last year, which is the most unforgettable one?

Its a toss up between Reading and Leeds, Touring Korea and Japan and playing the Roberto Cavalli show at Milan fashion week in my new pink sparkly boots.

What’s going on in 2017? What’s the bigger picture for Black Honey in the future?

A lot of its tip Top Secret but were mapping out upcoming tunes, tours, light shows, Merch designs, vinyl releases and videos as we speak. The bigger picture is well Big and pretty fucking exciting. 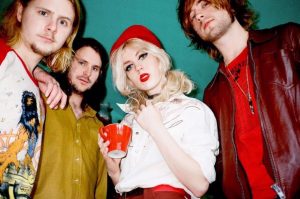 Tell us about your fashion, Izzy you make your own outfits? What is your inspiration?

I like to feel like I’m a character in a movie, and after watching a lot of Ru Paul I realised that to be truly unique you kind of need to invent your own style. My sewing is a total fucking mess but that doesn’t stop me from ordering my body weight of glitter trims and embroidered snakes and adding them obsessively to my Charity shop garment I own.

Underground inspires and is inspired by British Subculture, both contemporary and from the past. Which Subculture has had the most influence on you?

I really love punk, as a British subculture. I love how it manifests itself into say a Banksy painting or Japanese street culture or kids cartoons. Though it’s not something I interpret so literally in my style or writing I feel like loads of what we do and represent as a band is a big middle finger to expectation.

So two final questions. First up- you get to play support act for whichever artist you want (alive or departed) who is it? Second one- the tables are turned you can choose your support act who is it?

The Year Hendrix headlined Woodstock or go on tour with Nirvana supported by The Breeders in 93. To support us I would choose a young Bowie in his pre space oddity era. 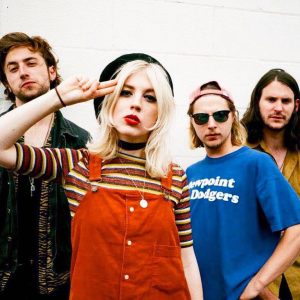