BOB MARLEY – Coming in from the cold 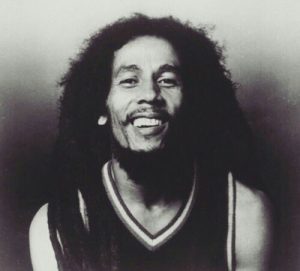 Bob Marley was born 6th February 1945 on the farm of his grandfather in the hilltop village of Nine Mile, the parish of Saint Anne’s in Jamaica. In the years, the followed his musical and spiritual greatness mapped out across the globe. He was courted by politicians, sports stars, rock legends and entertainers, universally loved for his music and his calmness. but his feet remained on the soil.

Marley was diagnosed with cancer in 1977 in the form of a malignant melanoma under the nail of a toe. The advice of his doctors was to amputate the toe but Marely, citing his religion and for fear of it preventing him from performing, chose instead to remove the nail and nail bed. All seemed well until September 1980 when he collapsed while out jogging with long-time friend, Allan Skill Cole the Jamaican footballer. Told that he had three weeks to live Marley turned to the Ethiopian Orthodox Church. On 4th November 1980, In the presence of his wife Rita and the children, Marley was baptised by Archbishop Abuna Yesehaq and given the name Berhane Selassie Light of the Trinity.

Marley set off to Bavaria to seek treatment at the clinic of Josef Issels. He underwent the controversial Issels Treatment that is natural and holistic. For Marley, the treatment was not successful and sensing the urgency he set off back to Jamaica, His condition worsened dramatically on the journey and was hospitalised in Miami. He passed, with his family at hand, on 11 May 1981 at Cedars of Lebanon Hospital in Miami.

On May 20th Marley was accorded the honour of laying in state at Kingston’s National Arena. The gold coffin was surrounded with the flag of the colours of Africa along with pictures of Haile Selassie and Marcus Garvey. Thousands queued to view his body and the huge crowds had to be contained by police who resorted to firing tear gas at one point. In the background the music of the Wailers can be heard through the speaker system Get up, stand up, stand up for your rights enough to encourage the crowds to push harder at the gates to the stadium. Over 100,000 managed to file past the coffin of their hero. 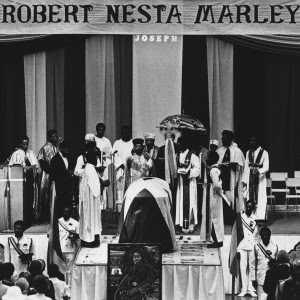 The funeral took place on May 21st. This was the funeral of Hon. Robert Nesta Marley O.M. In February of that year the Jamaican Government had bestowed the Order of Merit on their most famous son. On the morning of the 21st a private service was held at the church of the Holy Trinity in Maxfield Avenue, this service was for family and close friends. Shortly after Marley was taken to the Arena where a 6000 congregation and the worlds press awaited.

The casket was carried into the hall by the Jamaican Defence Force in their white uniforms and placed on a trestle adorned with the flag of Jamaica and the flag of Africa. There were politicians and dignitaries a plenty including the Prime Minister Edward Seaga, the opposition leader Michael Manley (who received a special reception from the congregation) and Sir Floriziel Glasspole the Governor General. Rita Marley added a final touch to the coffin of her husband by opening the lid and placing a sprig of herb inside.

The ceremony was conducted in the large part by Archbishop Abuna Yesehaq. The Archbishop of The Ethiopian Orthodox Church in the Western Hemisphere. The service was conducted in Geez, English and Amharic. Just after 11 o’clock, the service began with an Anglican hymn, “O God, Our Help in Ages Past”, accompanied by the drummers of the United Africa Band. 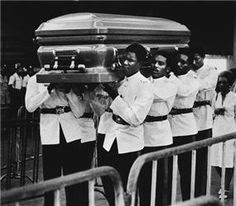 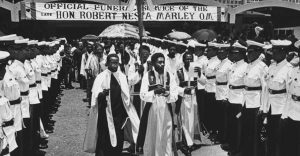 The first reading was made by the Governor General, taken from 1 Corinthians: “The last enemy that shall be destroyed is death followed by Allan Skill Cole who changed the programme from the reading of Psalm 68 and read Corinthians and Isaiah that were close to Rastafarian hearts. Cole had been wearing the clothing of the Twelve Tribes of Israel, a popular sub-sect of Rastafari founded in Jamaica in the late 1960s of which Marley had been a member. Unpopular with the Ethiopian Church who regarded them as heretics Cole had unsettled the Church and outstayed his allotted time to complete the reading. 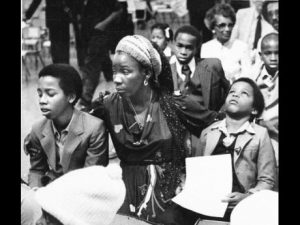 It was then the turn of the Archbishop, “Blessed are the poor in spirit; for theirs is the kingdom of heaven” and to lead the Lord’s Prayer.

Next up was the Prime Minister Seaga delivered a eulogy that ended May his soul,” intoned the man in the dark business suit, “rest in the arms of Jah Rastafari.” A direct reference to the religion of Rastafarianism, the Twelve Tribes cheered Seaga for the final recognition given to them.

Next up and in a very Jamaican and unorthodox way, The I-Threes Rita Marley, Judy Mowatt and Marcia went up on stage and sang “Rastaman Chant” before the Wailers, directed by the guitarist Junior Murvin, were on stage with “Natural Mystic”. Ziggy and Stevie Marley joined in replicating the dance style of their father on stage to the delight of the congregation.

After the service the funeral procession, including a sound system on a truck, busloads of followers, amongst them the Twelve Tribes of Israel, journalists and thousands on foot. The route winds its way up through the hills to St Anne’s. The truck with the casket breaks down and a replacement steps in as the procession continues through the Mystic Country where he was born and lived. The route is lined with onlookers coming out from the homes, farms and workshops and there is the sense that this is really a true homecoming. 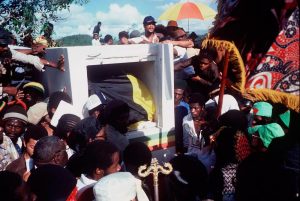 Nine Mile is no more than a hamlet, nestling in the red clay hills and consisting of some dwellings and a few bars. A temporary Mausoleum had been built there and the casket was carried up the hill to be interred. Cedella was accompanied by a guard of the military top brass, a TV helicopter buzzed overhead. The casket was placed in the Mausoleum. Alongside Marley the casket contained his red Gibson Les Paul guitar, a Bible opened at Psalm 23, and the sprig of herb placed there by his widow, Rita, at the service in the Arena. The officials, the police the top brass all departed to leave Marley amongst the Rastafarians who had congregated there.

Nine Mile, where Marley had been born and where he made his first home with Rita. It was late afternoon the music of Marley played from hand held Cassette players, The Twelve Tribes of Israel in their white robes, a setting sun and the son had come home. 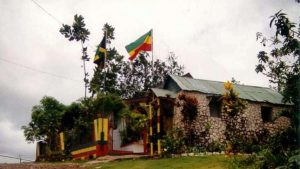