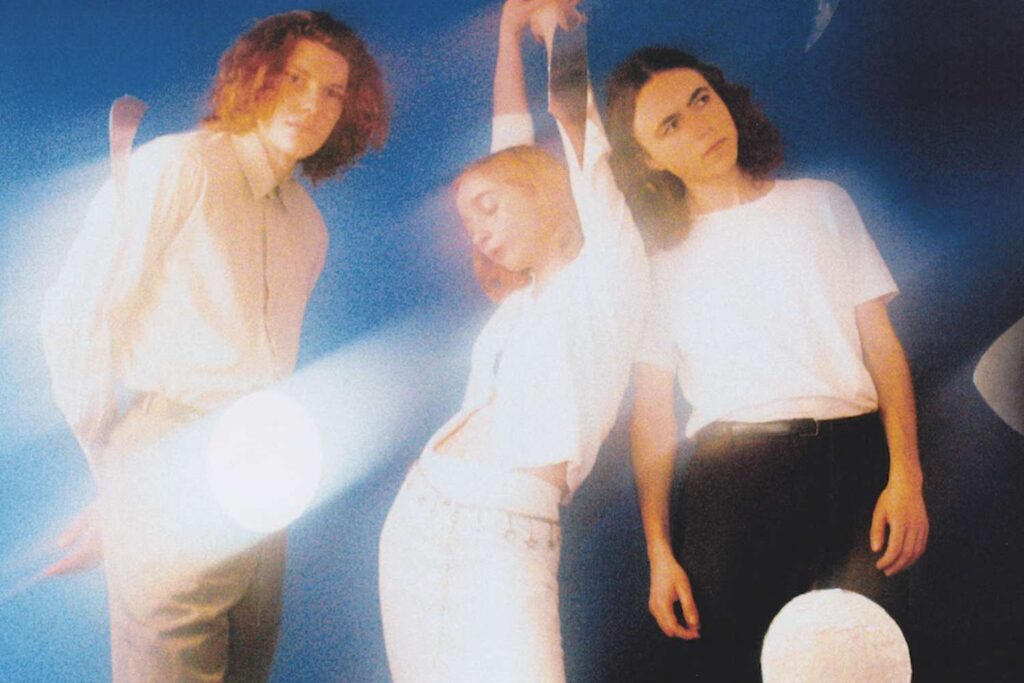 Bootlickers by name, Bootlickers by nature: Underground’s new radio show is all about applauding and advocating creativity; exciting, emerging and experimental. Our third bootlicking guests are the sublime three-piece band, Drug Store Romeos. Now based in London, this trio weave an escapist kaleidoscope of songs, citing their small-town origins in Fleet as a quiet catalyst for creativity; proving that you don’t have to shout in order to be heard. Listen to the third instalment of Bootlickers HERE to hear from the group about their much-anticipated debut album and their soundscape selections for the show.

The album is called “The World Within Our Bedrooms”, do you think you’d still have crafted this wondrous microcosm had you not began as bored, suburban teenagers? Now you’ve all uprooted to London – have those worlds shifted?

Sarah: We grew up in such a sleepy town with little to do, and we didn’t really know anyone else. We were so saturated with each other and seeing one another nearly every day which led us to immerse ourselves in the music we were writing. It would be a very different album if we hadn’t come from that background of painting the world within our rooms, as there wasn’t much going on outside.

You’ve gone from punk to garage rock to a more minimal, quiet atmosphere, would it be fair to say you’re on quite a gentle trajectory? That you don’t have to shout in order to be heard?

S: I emerged after the punk world that Johnny and Charlie were in!

Charlie: Not entirely; we would jam and Sarah would just scream and jump around.

Johnny: You’d be surprised at Sarah’s ability to mould genre!

S: We did a pretty intense cover version of ‘Janitor’ by Suburban Lawns. It used to be in our set all the time; we stopped playing it because everyone would say it was their favourite song and we’d say it wasn’t ours!

C: It was the only reason we got rid of it, I couldn’t take it any more (laughs)… we had a song that was similar to it and then that became everyone’s favourite too, but we decided we didn’t want to make minimalist new-wave post-punk…

The album has been around 5 years in the making, how did this lengthy incubation period play out in the studio?

C: I actually wrote pages and pages of notes for the studio, we’ve had many studio slots in the past where we didn’t get the result we’d wanted due to disorganisation. You really have to have quite a concrete vision to get that across.

S: Some of our tracks went back really far, we’d have synth sounds we couldn’t reproduce so we had to use old parts from demos in order to maintain the energy of the original. We’re the kind of band that will flesh out the whole track on a demo, and when we get to the studio it is really important to honour those genuine emotions. Sometimes those intricacies can get lost in a studio…you don’t want a song like a squeaky, shiny toilet! It can get too clinical without the textural mistakes and low-fi sound.

C: The sad thing is a lot of the time you can never recreate what made you fall in love with a demo; it comes from the spontaneity of the first few times. The nature of tonality of voice is that it’s so influence by small thought processes and emotions – you can’t actually do that again.

The album is 15 songs long – how did you arrange that rather lengthy track listing?

S: Before we’ve just released stand-alone singles, but the songs make so more more sense together arranged as a journey through this sonic world we’ve created. We wanted the songs to slip into those different areas as seamlessly as possible; night and day, light and dark intensities; creating a cinematic flow.

Do each of you have a stand-out track on the record?

J: I struggle to pick a definite favourite but in terms of making the album, there’s a track called ‘No Placing’. I forgot that when recording a song, you have to play it about 20 or more times and I only had the stamina to play this song about three times – I realised it had a very fast drum beat and that it was going to be a physical challenge! It sounds really good now and I’m really happy with how it sounds but it was a challenge to overcome when recording.

S: You can hear the sweat! My favourite one is probably ‘Walking Talking Marathon.’ It’s a long improvisation I did of just the same two chords and one drum machine beat and the lyrics slowly evolved; it’s so unfiltered and natural and spontaneous. ‘Adult Glamour’ is our oldest song so it feels like family to me now. It’s from a stage in my life when I had a rose-tinted view of the past and thought technology was very desensitising.

C: I think adult glamour is also one of my favourites…I have a love/hate relationship with a lot of them…

‘Secret Plan’ is your latest release, taken from the record, I like how the song alters – it trips you up in quite a friendly way! You’ve quite literally just released the music video – could you expand on the process behind it?

C: I wanted it to have an element of spooky, surrealist suburban-ism. We had shot part of it in Johnny’s lounge and we had planned to shoot some of it in Sussex, on this hill in Ducton where you can see for miles around. We’d planned to drive there at 2am because I wanted the light at sunrise but the day before, the guy who was helping up had looked up the weather conditions and saw that it was going to be 40mph winds and had a warning of “may cause structural damage to your house” safe to say we couldn’t bring the drone… So, we decided to shoot that scene in Fleet too, where me and Johnny had done sports day!

How are you feeling about your escapist bedroom world colliding with a live iteration? What are your plans for the live shows?

J: Organza fabrics! We’re going to make a patchwork canvas out of the fabric used for the ‘Secret Plan’ video.

S: I nearly ran away when we played our first show back in London, it was our first show in over 400 days and it was so intense! I just thought how the hell am I going to be on this stage for an hour! But I think we pulled it off…

C: Before we started, the crowd started to fill up and I jumped on stage to set something up and smashed my head on this hanging PA and just walked up to my drum kit in a daze…!

What’s next for you?

S: We’ve got some in-stores and some shows. We’re playing Camberley, this town where everyone from Fleet used to go to hang out in the shopping centre and arcade when you’re like 12!

C: We’ve just got an American booking agent too so we’re going to play America next year! But hopefully we’ll be doing lots of writing, the album was 5 years in the making but many of the songs were written in the last year; we’re on a path now and have a strong desire to keep exploring our sound and the boundaries of those emotions.

Tune into Bootlickers every third Tuesday of the month, 2-4PM on Soho Radio’s Culture Channel or listen back HERE.