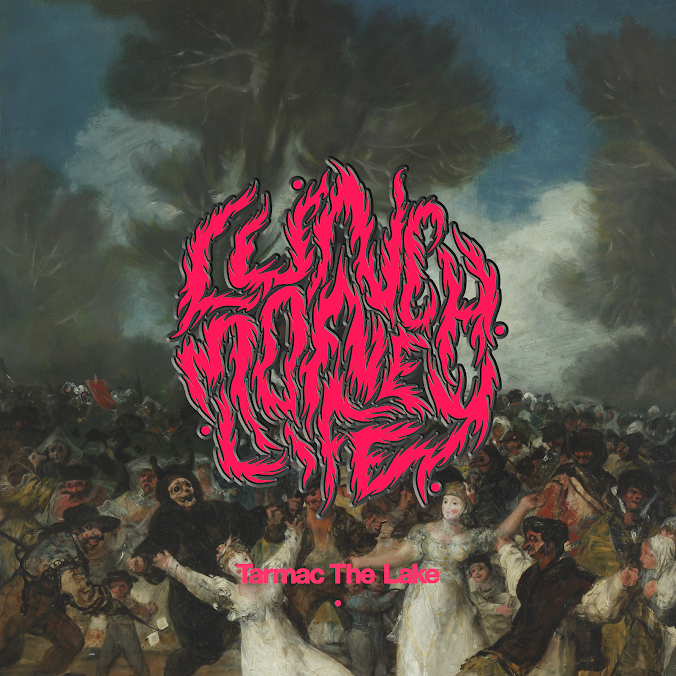 Bootlickers by name, Bootlickers by nature: Underground’s new radio show is all about applauding and advocating creativity; exciting, emerging and experimental. Our latest bootlicking guests were London-based instrumental outfit, Lunch Money Life. Hot on the heels of their latest EP ‘Tarmac the Lake’, we caught up with brothers Spencer and Jack to talk of the group’s charitable beginnings, lockdown renderings as computer game characters and their current pursuit of the notorious actor who served as inspiration for their single ‘Nicolas Cage Please Get in Touch.’ Listen to the September instalment of Bootlickers HERE to listen to Lunch Money Life’s playlist picks for the show.

There are various origin stories about Lunch Money Life, that you started as a philosophical reading group, were the musical arm of a charitable organisation, and originally had a dozen members. For the uninitiated, how did the group reach its current state?

Jack: It’s entirely true; we did start as a musical-wing of a charity organisation, it was a dream in hindsight as it never took off. There were ten or more of us making weird sounds in a room, and I suppose it streamlined until 2019 when we were trying to make it legitimate and started taking it more seriously and tried to push it to the next level.

Spencer: Jack and I are brothers so we’ve known each other for a long time (!)

J: We’ve played music together since we were kids, so I guess it started as a two-piece, then became a twelve-piece and now we’re down to a five-piece. So, we’ve tried it all but 5 seems about right; five you can fit in a car! Any more than that and you’re looking at a van rental!

Your music is “composed communally and spontaneously,” how do you go about committing that improvisation and spontaneity to a fixed form in terms of recording?

Jack: Basically, we hang out at the start of every year and do two weeks where we’re all there; we use that as a full creative output and then we spend the rest of the year doing the hard labour of piecing it all together into a composition. That’s been our approach as a rule but it does vary, sometimes the songs come out fully formed, sometimes it takes ages knocking away with hard graft of studio time and rehearsal time until they come to fruition.

Your album ‘Immersion Chamber’ was released two weeks before lockdown. Despite being unable to promote the record live you navigated the challenges ingeniously, releasing a computer game to go with your song ‘superego’, a forum called ‘iprayer’ and you appeared as holograms in collaboration with Sweat. Could expand on these immersive, digital projects?

S: At the time our idea was to release the music and then tour it and when that went down the plughole, we just came up with as many weird ideas that we could get away with doing digitally, and that manifested itself in the computer game, the chat bot and the digital apparition Lunch Money Life show with Sweat. It was mostly just throwing stuff at the wall and seeing what stuck and it tends to be the most outlandish ideas that excite us the most…hence putting lots of work into building a chat-bot!

J: It was just for want of anything in real life, we had a delusional moment thinking the March shows would just be postponed until May, but then you realise you have to do something or else you cease to exist. We wanted to rule out anything that felt like a I’ve show but worse; making a digital product rather than a digital knock-off of a real-life thing.

S: Our perfect world is the flesh and blood. The more we can do shows and explore the interpersonal connection, the more satisfied we tend to feel.

J: We played our first show since 2019 at We Out Here Festival, and that was incredible. I repressed all emotion, be that nerves or excitement or dread, until the show, and it all came out and it was great; long may it continue!

Your first release from the EP, ‘Human Sacrifice’ was a line in the sand between your old and new material, stating that the latter is more urgent and boisterous, is this a product of a year spent in the limbo of lockdown?

S: Yeah! Now, you have a huge sense of urgency or desperation or excitement and it just feels incredibly important that you absolutely bang it as hard as you possibly can when you’re in the room doing it! Hopefully the music sounds like we are giving everything we’ve got to that exact moment of being in the recording studio and hopefully you can hear that leaking out the sides.

J: That recording process was the first time we’ve played in a professional or meaningful capacity with the purpose of someone else hearing it. We wanted to record it as much as possible live and in single takes rather than with over-dubs; it felt like playing a gig. ‘Human Sacrifice’ sounds different to ‘Immersion Chamber’ which was produced by virtue of how we recorded it, in dribs and drabs snatched in living rooms and bedrooms and the church.

S: (Immersion Chamber) was quite an isolation-style record now I look back at it, it is the kind of record you might make during a lockdown but ‘Tarmac the Lake’ was very much the opposite, we needed to sound tangibly like we were in the same room.

‘Human Sacrifice’ also prompted a Nicholas Cage-shaped quest and a song to go with it, ‘Nicolas Cage Please Get in Touch’. Why, of all people, was Nicholas Cage your go-to sacrificial choice?!

S: We’re just huge fans of his work, to some extent, spiritually, we feel a relationship with him. There’s a guy who turns up on set and says he’s going to explode and give it everything he has! Nobody is bored by Nicolas Cage; either you have revilement or respect, and often both at the same time. He is possibly the best and also the worst actor of all time and that precise axis of simultaneously being extremely great and extremely awful is definitely what we try and achieve in our music.

J: He’s definitely doing something different…but also, there’s something about track title naming when you’re in an instrumental band which is quite freeing. When you’re naming a song with lyrics that are telling a story there’s a duty to name it something relevant, whereas the story of an instrumental track is more subtle so you can tap into anything you want. When we wrote that song, we thought it sounded like a theme tune to the perfect Nicolas Cage film with the mad bits and ultra-glorious, delicious pop bits – Cage was the guy for the job! Let’s see if he reaches out, we’re awaiting contact.

And since then, you’ve been on a campaign to find the man himself – placing newspaper adverts and driving 15 hours to a premiere – how close have you gotten to achieving the goal?

J: I’s be surprised if he didn’t know about it by this point, but maybe that’s a deluded sense of self-importance. We tried to go to places and film screenings where he or his team might be but we’ll see what happens! We did bring a USB stick with the tunes on when we went to Edinburgh just in case we met him and could say “here’s some mp3s.”

Back to the EP – your launch date was originally Friday the 13th of August, which no surprise if you’re superstitious, had to be rescheduled to September the 17th – what can we expect from this headline show?

J: We’re putting it together ourselves so we can do it our own way, it’s BYOB, we want it to be a really fun, relaxed, not hyper-corporate gig. This will be our first headline show in a long time, festivals are fun but different; people come to a gig to really engage with YOU whereas festivals have more chance and ulterior motives involved.

Jack: Spencer has become a cigarette sculptor over lockdown! He surprised everyone with his sculptural leanings, he was just in his room with huge plumbing pipes….

J: Gig for the rest of time, and release music with as little gaps as possible, meet Nicolas Cage, and maybe branch out into other A-List celebrities and shoot a 4-hour Rock Opera!

S: Having had a year and a half robbed from us, we just know now that every moment is something to be grasped with both hands.

J: We did a tour at the end of 2019 and I just had such a good time driving across Europe, that became a really fond memory during stationary isolation. I just want to be in a service station in North-West Belgium eating miserable food on the way to a gig!

‘Tarmac the Lake’ is out now