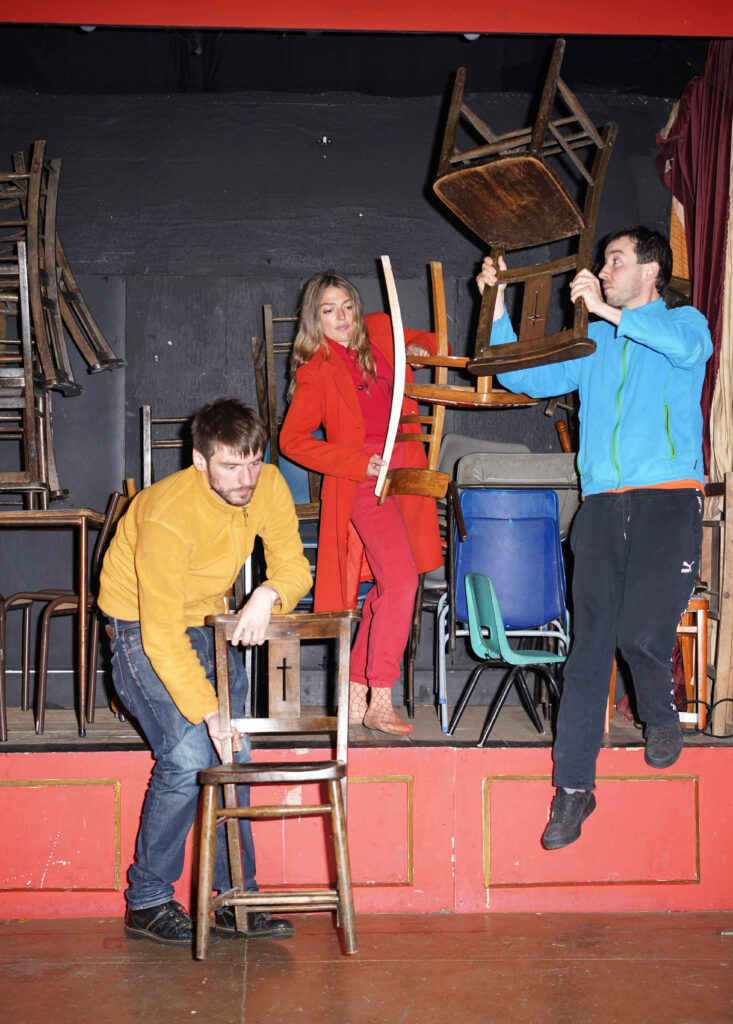 Bootlickers by name, Bootlickers by nature: Underground’s new radio show is all about applauding and advocating creativity; exciting, emerging and experimental, with the latest instalment featuring Halifax-based trio The Orielles, and London-based trio Pozi. Having their name from a drill-bit, it seems fitting that Pozi’s musical offerings are screwed tight with a precise, menacing verve. With all three members sharing song-writing and vocal responsibilities, Pozi have been spearheading the use of violin in alternative music. Following on from their 176 EP, released in the July of last year, the group’s output has progressed from an anxious disposition to a more meditative structure. We caught up with Toby Burroughs (Drums & Vocals) and Tom Jones (Bass & Vocals) about their EP ‘Typing’; listen back to this episode of Bootlickers for their playlist picks HERE.

You’ve just released a video for your latest single, ’Detainer Man’, what’s the story behind the song?

Toby: We wrote it when we were in Margate; obviously police brutality was at the forefront of conversations at the time, the song happened to sound like a police chase so the lyrical themes then tied in. It’s written from the perspective of brain-washed police officers, who are programmed to violate people; it sounds really dark but actually it’s quite an upbeat track!

The statement for your new EP, ‘Typing’, begins forebodingly with ‘The nightmare continues…’ Do you remember the last nightmare that you had?

Toby: That’s a good question! I think I could do it but it’d take a second to remember. I had a weird one but I can’t remember what it was!

Tom: I’ve definitely had a nightmare within the past week. I was on this island; it was surrounded by beautiful ink-blue water and everyone in this town was talking to me and giving me free ice-creams and stuff like that. Someone came up to me and asked “What’s your number?” and I said I didn’t have one; and then the whole island started shaking really loudly…and then I woke up and realised it was my phone going off…

Your recent single ‘Sea Song’ echoes its tidal subject matter in its musical repetition. What was the genesis and process of this song?

Toby: Rosa wrote the lyrics but it started with Tom’s bass line.

Tom: I’d been playing around with that bass line over lockdown, I wanted to make something that was tense and nervy; I was feeling really isolated and nervous. We write a lot of our stuff in Margate, and so I supposed the song was influenced by the environment there.

Last summer you released an EP called ‘176’ which already hinged on paranoia and anxiety. Does your upcoming EP ‘Typing’ continue in this vein? Is it hard not to get stuck at one emotional pitch?

Toby: ‘176’ was definitely quite moody throughout, but I think this one is more of a mixed bag. Sea Song is nervy in some ways but it’s softer and more melancholic, rather than being angry-sounding, it has a reflective atmosphere. In a subtle way, it is a positive record, handsome of the new songs we’re working on for our next release are even less nervy on the whole! We’re not stuck in a perpetual mood, but I do think that one of our strengths as a band is the live energy and the drama achieved by the violin; it can be quite easy to follow the path of that tense, dramatic style. We are blending back into a hopeful place though…

What were the processes behind writing and recording the EP?

Toby: As Tom said, we go to our label’s residency space and studio space called PRAH Foundation a couple of times a year in Margate, we’re really lucky to be able to escape there. Tom wrote the title track, and we all write different parts, but the songs are fully formed once we get together.

Tom: With lockdown you are forced to be really self-reflective. It was so nice to get away and be out of London, I think it really helped the creative process; refreshing our surroundings made some really healthy jams!

You’ve been lauded as a “post-punk band but without guitar”, how do you define the gene you inhabit?

Toby: When we formed, our common likes were some classic post-punk bands like PiL or Television Personalities.

Tom: When we first started jamming together, we’d talk about Television Personalities all the time!

Tom: Musically, it is a good reference point as a means of introduction. We’re in the territory of that genre but the sound has developed. The title track of the EP – ‘Typing’ – has an electronic feel with synth parts; we’re moving in different directions.

What’s the rest of the year looking like for Pozi?

Tom: Working on song ideas and recording the next album hopefully!

Toby: Touring basically, that’s pretty much it and working our day-jobs too. It’s probably quite unrealistic for many bands to not have to work alongside, if we were in France or somewhere, they get artist’s allowanced and grants, but sadly not here…We’re doing a UK tour in the autumn. It’s a bit weird, we did a show a month or so ago, and last year we didn’t even need to practice because we were playing so much but…

Tom: I almost forgot a song! We were about to start and I was like “Oh no, I’ve fully forgotten how this starts”, I just had to re-work it very quickly in my head…

Toby: We need to get back into the swing of it. In a way, I’m looking forward to when the tour is over, or mid-way through, and we can just relax into it.

‘Detainer Man’ is out now. Pozi’s new EP ‘Typing’ will be released on the 29th October on PRAH Recordings, and is available to pre-order now.