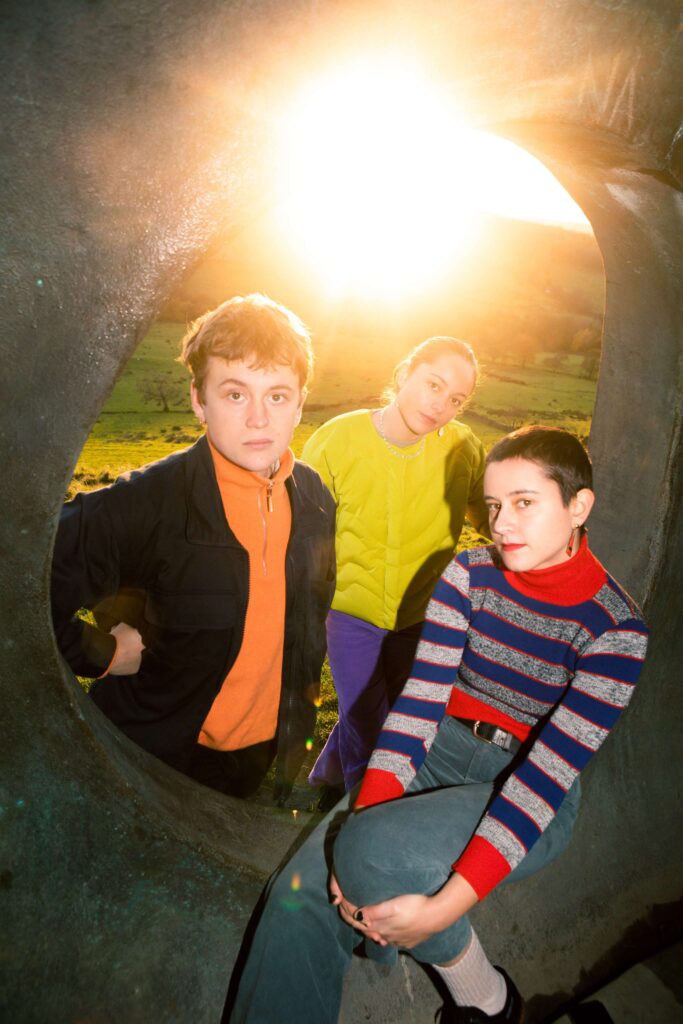 Bootlickers by name, Bootlickers by nature: Underground’s new radio show is all about applauding and advocating creativity; exciting, emerging and experimental. Our latest bootlicking guests are the Halifax-based trio The Orielles, hot on the heels of releasing their self-scored, self-written and self-directed short film ‘La Vita Olistica.’ Instead of resorting to a lock-down of twiddling their thumbs until band life could resume, the group decides to re-calibrate their album ‘Disco Volador’ (released in February 2020, just before the world imploded) into an improvised visual and sonic romp. Listen to this instalment of Bootlickers to hear from Esme, Sidonie and Henry about their de-constructing the live experience and their experimental plans for the next album HERE.

Henry: It was symbiotic, we knew we had some atmospheric pieces we wanted to write and they influenced each other and informed the creative process of both.

Sidonie: We recorded the music before we made the film, so the elements of the film are inspired by the music; those ambient jams and more subdued moments and the vibes of that!

Esme: We could foresee, early in lockdown, that everything online would just be churning out content and we thought that would be our biggest enemy. We thought we needed to tackle it in a way which would give justice to this album we’d put out just before lockdown, ‘Disco Volador’, and spend a bit of time doing something we’ve always wanted to do – which is a soundtrack.

The content of your songs has often taken inspiration from film so to shoot and score your own film is hardly surprising. This short film was particularly inspired by the countercultural cinema of the 1960’s, what was it about that time and culture which particularly attracted you?

E: Definitely in terms of the motivations for making the film, The Canyon Cinema in San Francisco in the 60’s and their DIY process. Stan Brackhage was a good inspiration for the short film in regards to looking at nature; one of our greatest options for content throughout the year WAS nature, we really enjoyed reconnecting with that. Nature became a texture within the film, it’s such a nod to how we’ve been viewing the world and living behind screens, but then the natural element is more tangible.

The film is being shown at a fair few cinemas, venues and surprise spaces this summer, what’s it been like seeing your creation on the big screen?

E: We’ve just been to one screening so far, we held off watching it for a long time after we’ve finished it, so it was nice to see it again after all those months.

H: It was a very healing thing, the whole process had been done over lockdown and watching it in the context from which it came from, and then being allowed to show it in a room full of people was amazing.

S: It was particularly nice too because it was a Manchester screening so everyone there were mostly our friends or people who’d played a part in the film, it was like re-living the motion of it all over again.

You’ve also got some live shows coming up, what can be expected of this live return? Will you be playing similarly to the score with the songs organically flowing through the set?

H: We’ve quickly worked in a lot of ‘La Vita Olistica’ songs into the set but we’re constantly changing songs to coincide with the times, so there’s a lot of new parts and changes; live versions are what we thrive off.

E: We’re in a studio at the minute and I feel like we might sneak in a few new songs….and then we can just improvise!

H: Before, we would start with an improvisation and it would quickly become structured, but we’re keeping it even looser in the studio now. We’ve got this tune we’re working on that is 10-minutes-long where we started by closing our eyes and being picked at random to go to the ‘live room’ and pick up a random instrument and make a free-form sound…we can’t really say more than that…

S: Tying it back to the film and its improvised element – it taps into our interests the days – the musicians we enjoy are on that vibe and we’re just feeling inspired to be back in a studio and being able to write together.

How will you evolve the visual and sensory element of the live experience now you’ve made such a visual work?

E: We want to do the film with a live soundtrack, playing with projections is something we’ve always done but we want to elevate that and get people to do live visuals alongside.

H: There’s lots of cool analogue video manipulation that can be done live so we’re going to see who’d like to do that with us.

S: We spoke about potentially doing a gig in a gallery, I think that would be really unusual and different, especially as people have been missing galleries as much as gigs.

H: The thrill of playing music and not knowing where it is going to go, and then suddenly performing with an audience with de-constructions of the film and more musical equipment around us, would be a really freeing experience to get us in the mindset for the next album.

E: For the film, we didn’t want the onus to be on us purely as a band on stage and everyone watching. I think that’s what needs re-thinking about live music; DJ sets and club nights are so much more immersive and communal but with live music you’re just standing there in a line watching people on stage.

H: The better shows are when people are dancing in circles or not necessarily looking at the stage; it’s all about being free. In our new demos we’ve been looking into a lot of musical theory in terms of breaking free within the actual song arrangements, where the drums could be a character etc…It’s all a vague thing which you will find out about next year or something!

E: In that space, the context is so displaced.

H: The whole thing was formulated from missing the human connectivity of a gig and wanting to be as close as possible to other people.

‘La Vita Olistica’ can be listened to HERE

The film is being screened at the following locations: