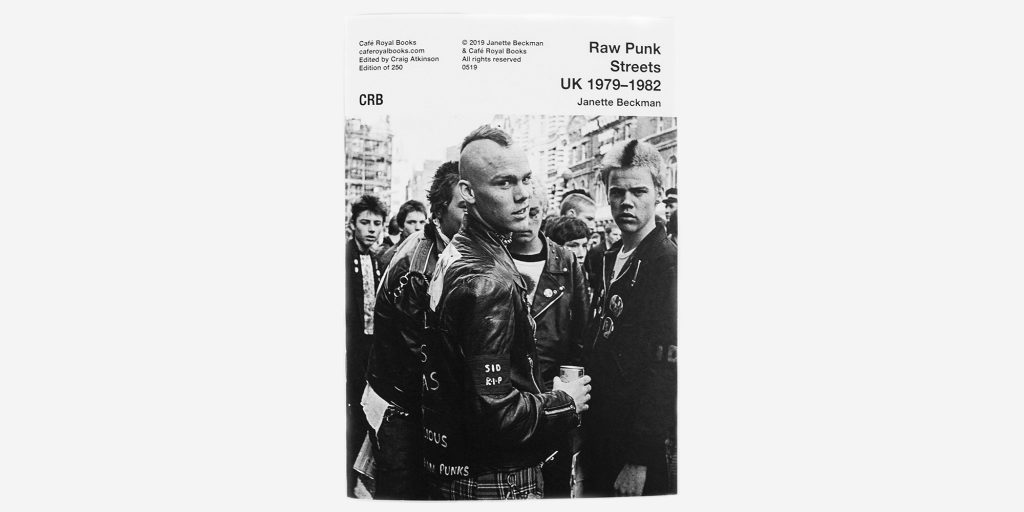 Café Royal Books is a publisher of limited-edition titles focusing on British documentary photography. Craig started the project in 2005 as a way of exhibiting his own artwork without having to use a gallery. As his own work became more photographic, so did what he published.

The selection from Café Royal Books focuses on the UK’s history and cultural movements such as the 70s DIY punk scene and the Rock against Racism movement. They are diverse, informative and affordable. Authenticity in black and white without fuss or decoration. Café Royal Books quickly gained more traction and now features renowned photographers such as Janette Beckman, Syd Shelton, Mark Mcnulty and Janine Wiedel. It is dedicated to publishing roughly 70 titles each year, and photography fans from around the world are delighted to get a glimpse of British subculture.

Underground England is happy to announce that we’re now stocking a selection of Café Royal Books titles. We recently spoke with Craig, the brain behind the Café Royal Books collection, to find out more about the art of photography, independent publishing and his most treasured photos of all-time.

An interview with Craig Atkinson, founder of Café Royal Books

How did you come up with the name Café Royal Books?

It’s the name of the pub I was in when I was looking for a name to publish by.

The series contains some of your own work. Have you always been into photography?

I’ve only ever taught myself photography and Café Royal Books helps me to learn. I’d feel uncertain using the terms professional or photographer about myself though, not really sure what they mean.

Can you share with us some of your current favourite issues?

I can’t have favourites. The kind of things I like are showing work that no one knows, photographers people haven’t come across before, or work by a well-known photographer that has somehow remained fairly underrated or unseen.

If there is one single photo that you adore amongst the whole series what would that be?

I could pick so many. Most of the work I publish is part of a series, rather than individual pictures, but sometimes single image does just hold themselves, usually for nostalgic or personal reasons.

There’s a picture on the cover of a very recent book by Mike Seaborne, which I think captures the time perfectly. Steve McCoy’s work, because it’s my childhood; Janine Wiedel’s, because of the rigour; Marketa Luskacova’s forthcoming work, because it’s so intimate; Chris Killip’s portraits, because they have an absolute gentleness and understanding to them. He sent me a print of my favourite image, “Simon being taken to sea for the first time since his father drowned”. I’ve never published that one.

You are an independent. What are your thoughts on the growth of independent and contemporary art and publishers in the UK?
People rise to the challenge of many galleries and publications being quite tight and fairly closed circles. Independent publishing and exhibition spaces and other forms of art – objects, books, mail – are ideal ways to work. I also think they’re a lot more inclusive than galleries can ever be. It is great people are trying things. Some will stay and others decide it’s not for them, which is just part of the process. It’s difficult. it’s loads of work. And if you studied the figures prior to setting up, you probably wouldn’t.

Café Royal Books is an archive of British documentary photography. Does it appeal to international customers who might not be as familiar with British culture as local customers?

With digital technology taking over the photography world, what is the takeaway for those who own a copy of Café Royal Books titles?

Digital is transient. It’s amazing too. Print on paper holds something else. It pauses you. Digital is fast. I have no real argument between analogue and digital photography. People do but it’s usually a preference or personal history based.

Tragic as it is, do you expect to see a slug of photos reporting the days of lockdown and isolation?

Yes. I’m not interested in those right now though. In 15 to 20 years, if humans still exist, they will be more important.

What other titles would you imagine there will be in the coming years that document contemporary culture?

it’s difficult to know, because who knows what’s coming. This year has certainly been eventful.