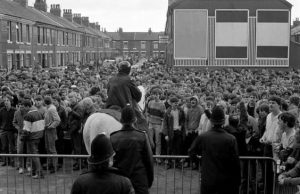 Like all sub cultures the Casuals of the late 70s and early 80s borrowed a little from their predecessors. There were traces of Mod and Northern Soul and there were some straight up converts from skinhead to Casual. The rivalry between the hooligan crews was probably no worse than the pitch battles between Mods and Rockers on the Bank Holiday beaches or those between Skinheads and Greasers on the same beaches a few years later. But there was something a bit different about this new youth culture. It was the sharp dress sense and style that marked them out in a time of high unemployment when the youth of Britain seemed to have been abandoned.

Sub Cultures had until then, built their image on repurposed workwear or surplus military clothing. Work boots, Donkey Jackets, Parka Coats and Bomber Jackets were all re-appropriated and traded up from their original humble utilitarian function to become fashion items. The Casuals re-appropriated right enough but in the complete reverse they took the fashions of the wealthy and even the retired and brought them to street level. A typical matchday in any football town across the Kingdom would see the terraces looking like the entire membership of every Golf Club, Tennis Club and Ski resort had turned up for the match. Golf Jackets, Lambswool sweaters, Polo necks, Tennis Shirts, Ski Jackets and Tracksuits were paraded by the rival fans keen to show that working class and jobless they might be, but they knew a thing or two about how to dress and where to find it.

The Casual culture remains today, the hooligan gangs less evident and the dress slightly toned down, but it was one of the most influential movements. Of course, the association to violence that did, in the extreme cases result in deaths, and the targeting of Football fans by the Government of the day seemed to toxify the whole movement forever. The violence met out by Skinheads or Mods seems almost innocent and naive compared to that inflicted by the Casuals. Perhaps it had more to do with the society at the time. The Mods, the Rockers, The Skinheads were rebelling against authority but they had a future. The Casuals were rebelling as their seemed to be no future. It was more politically expedient to slam the door on the Casuals.

Of course, there are many elements that remain including the trainers and the some of the labels. But we have never really seen a full-on revival of the culture. It seems like something no one dare take on. A bit too dark and a bit too close to the truth to reimagine.

About the book -Casuals: Football, Fighting and Fashion – The Story of a Terrace Cult by Phil Thornton.

We mention it as it is one of the most comprehensive accounts of the movement and Underground store in Manchester gets a handful of mentions in the book because its offering of rare trainers back in those early days.