CHAOS AND CONSUMERISM: The Red Stains on their latest single “Freezer Jesus” 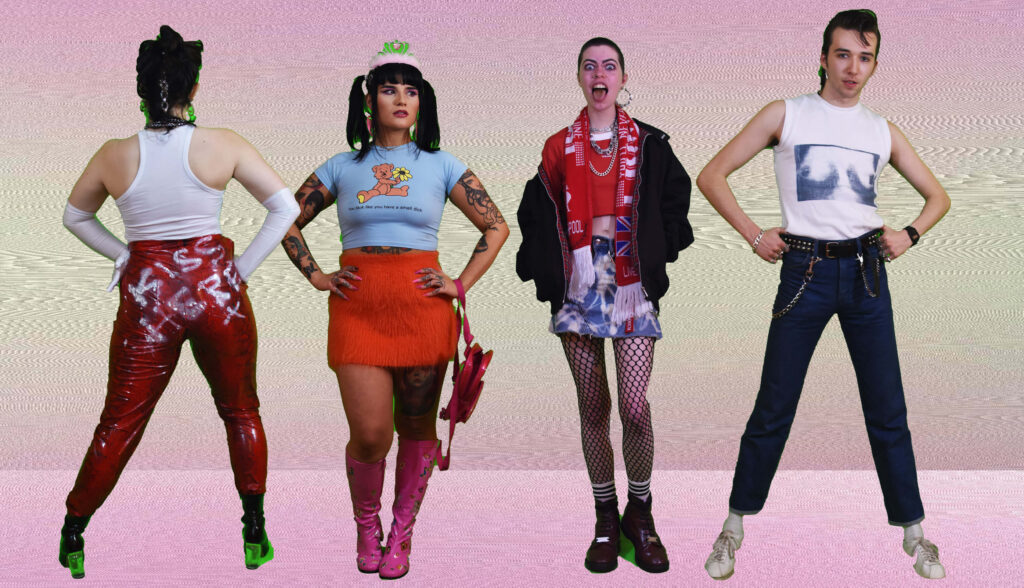 The Red Stains have only been a band for a year but they are leaving their mark more indelibly than their lipstick graffiti around Manchester’s bars. Their songs may have a Poly Styrene-like predilection with capitalism and artificiality (their song ‘Mannequin’ speaks of plastic and objectification.) Yet to categorise The Red Stains with a bygone genre is to deny that they are a product of the modern world. Their latest single, ‘Freezer Jesus’ shrieks of Black Fridays and Iceland freezers, a playful critique of consumer culture. Just over one month on from its release, we spoke to 3.5 members of the band (Natalie on vocals, Sterling on bass and Ella on synths, with drummer Ben making a brief appearance) about their influences, creative process and music video chaos.

Your name conjures a striking visual image, where did it come from?

Sterling: We were all talking about names and that one just stuck. It could be a reference to ketchup or red marks but it could mean period stains.

Natalie: As time progressed, it fits even more. People love or hate us but with red stains, you can’t get them out of clothes easily – so we’re stuck there.

Is there a particular movement or moment in music that you identify with?

Ella: I personally feel like that is difficult to answer in 21st century as everything has merged.

S: We are all influenced by different subcultures. I’m into punk, Nat likes Britpop, Ella likes electronic, we collage and patch it all together which feels really subversive in itself.

Are there any descriptions of you and your sound that you don’t agree with?

N: It’s so easy and predictable when you see women play alternative music to pigeonhole them as Riot Grrrl. I have the utmost respect for that movement, but we aren’t it.

S: Riot Grrrl was ’90s America, we’re in 2021 Manchester. It feels lazy to say ‘girl punk’. We incorporate so much more into our music with Ella’s synths and Nat’s singing style. I’m influenced by dub reggae, it’s not just punk.

E: The same goes for ‘fierce’ and ‘sassy’. It’s unbelievable that journalists are still saying that about girl bands.

Your new single, ‘Freezer Jesus’ can out just over a month ago, can you elaborate on the process behind the song?

S: I wrote the lyrics when i was very hungover and caffeinated.

N: The timing for releasing it couldn’t have been more perfect. Right now, we’re all locked in but the shops are still open, consumerism is taking over everyone’s lives on a bigger scale now. So in that sense it’s an important song for right now.

This is your first music video, who came up with beheading Barbies and spilled spaghetti hoops?

N:I had an idea of us all watching the TV and flicking through adverts. Nothing speaks to me more than a band that are visually aware of themselves and want to share a narrative.

S: We wanted it to be chaotic and fun to shoot and to watch. It was quite hard washing the fake blood off my hands though, it took about three days.

A Red Stain has a red stain! What is a Red Stains live show like?

N: The last gig we did was socially distanced, we had technical difficulties towards the end…Ella played an air raid siren, the drum pedal broke, and we just ended up talking about crisps. It was a stand up comedy show and live music rolled into one.

S: I really enjoy playing live and having people to interact with and just to be loud and chaotic is something that’s really important to us. We all miss it.

E: I get free live music everyday, there’s a man who sings loudly along the high street. I don’t miss it, I get it all the time!

What’s next for you?

S: We are writing and coming up with ideas but sadly its not safe to be practicing in lockdown, we’re hoping to get some gigs for next year.

N: I want to get away from writing a corona ballad, the world has been so filled with the pandemic, I think we need more songs about stealing stuff from shops and having fun! Whatever that means!