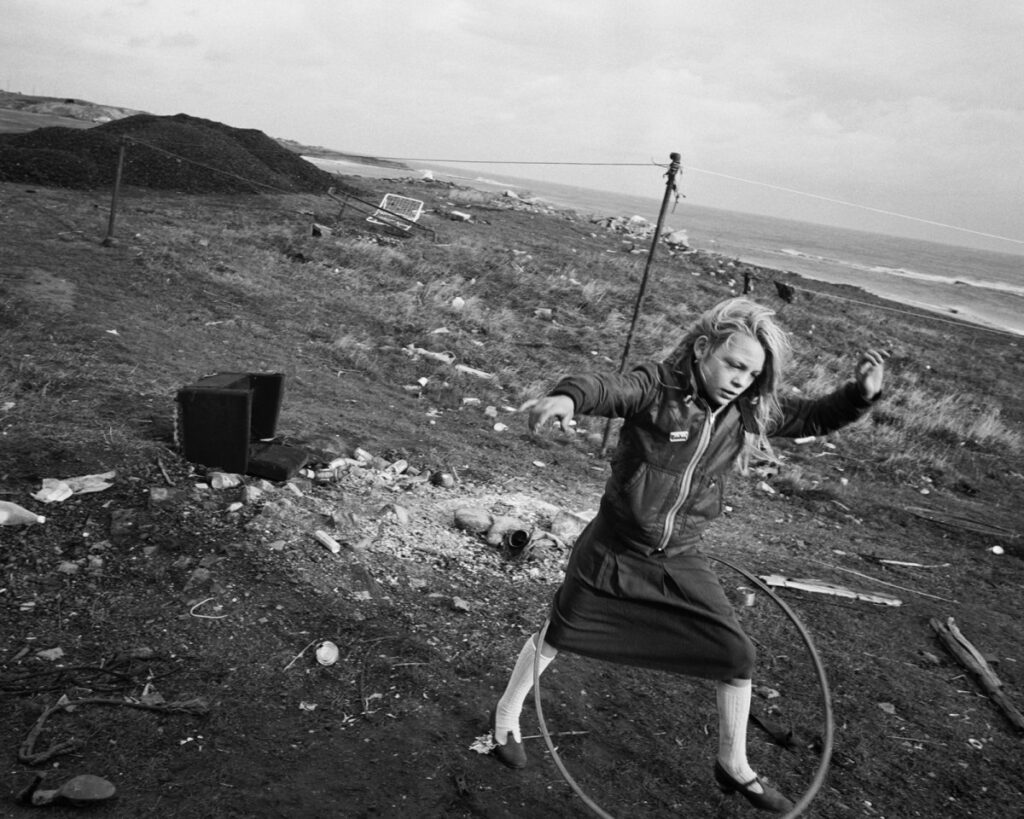 Chris Killip is hailed as one of the most influential and pioneering British photographers of the latter half of the 20th century. Now, two years after his death from lung cancer in October 2020, The Photographers Gallery, Soho, is staging a major retrospective of his work, put together by photographer Ken Grant and curator Tracy Marshall-Grant. The exhbition features over 140 images from his extensive cannon of stark, hard-hitting, yet undeniably poetic visual documentation of the realities of the working class in the 1970s and 1980s. 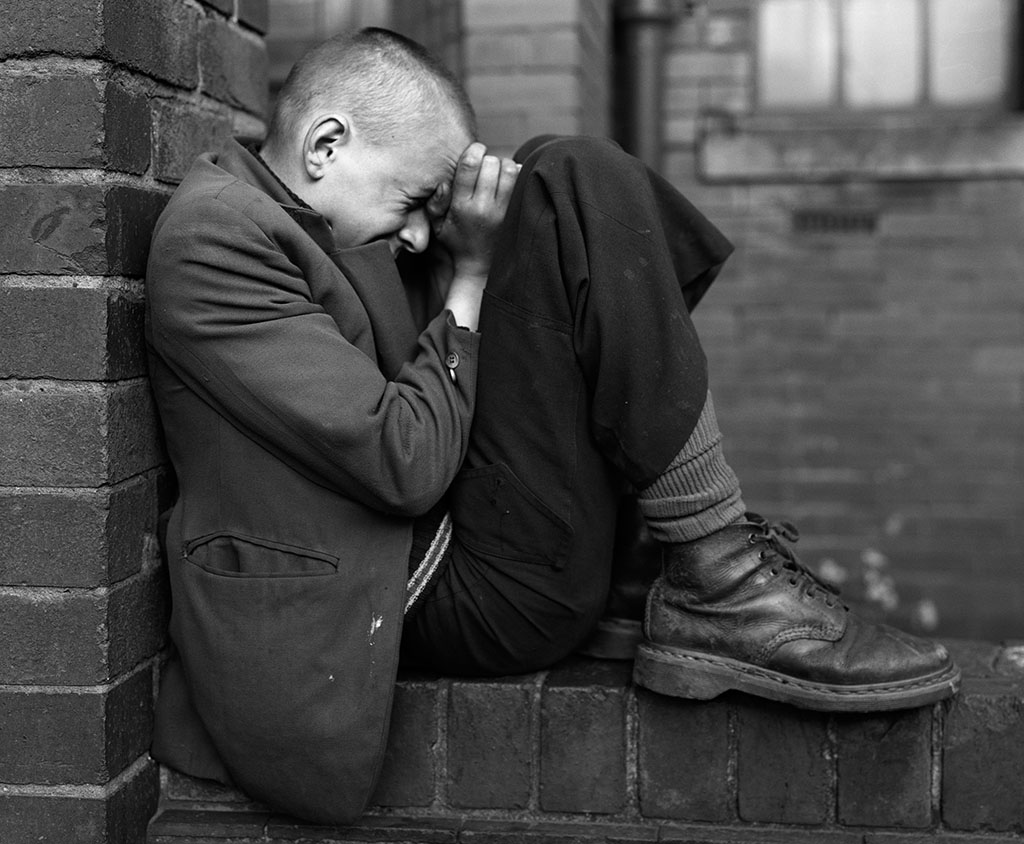 Born in the immediate aftermath of World War II in 1946, Killip dedicated his career and lens to focusing on the people affected by the rapidly changing face of Britain in the post war years. With a tangible sense of urgency his photography, all shot in his signature black and white, serves as both important historical record and a deeply empathic exploration of the human experience (and cost) of a society upheaved by dramatic economic and social shifts, and communities torn apart by Thatcher’s systematic shutting down of the mining and shipbuilding industries in northern England. More, capturing the reactive defiance of the people faced with the certainty of their way of life in flux – mining strikes, union marches, and of course that most British form of political protest; music, style and subculture.

“History is what’s written, my pictures are what happened”. 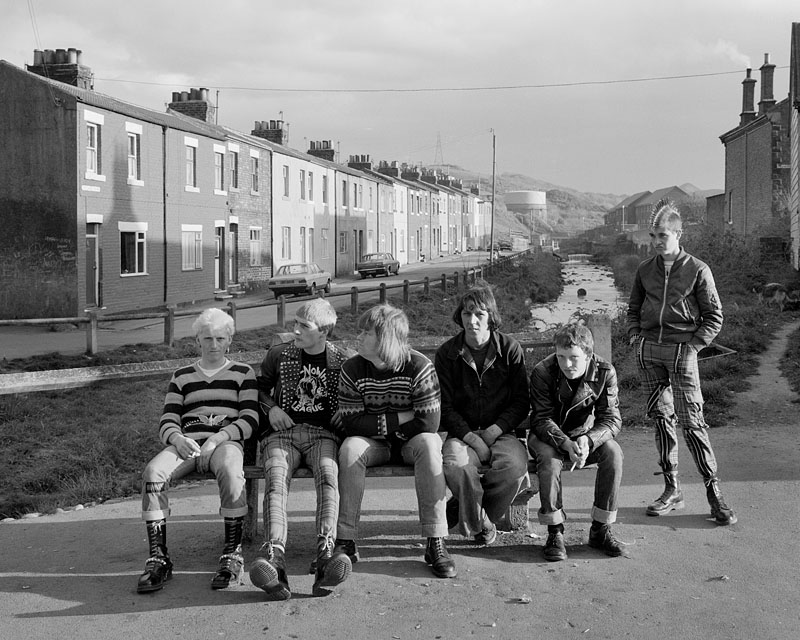 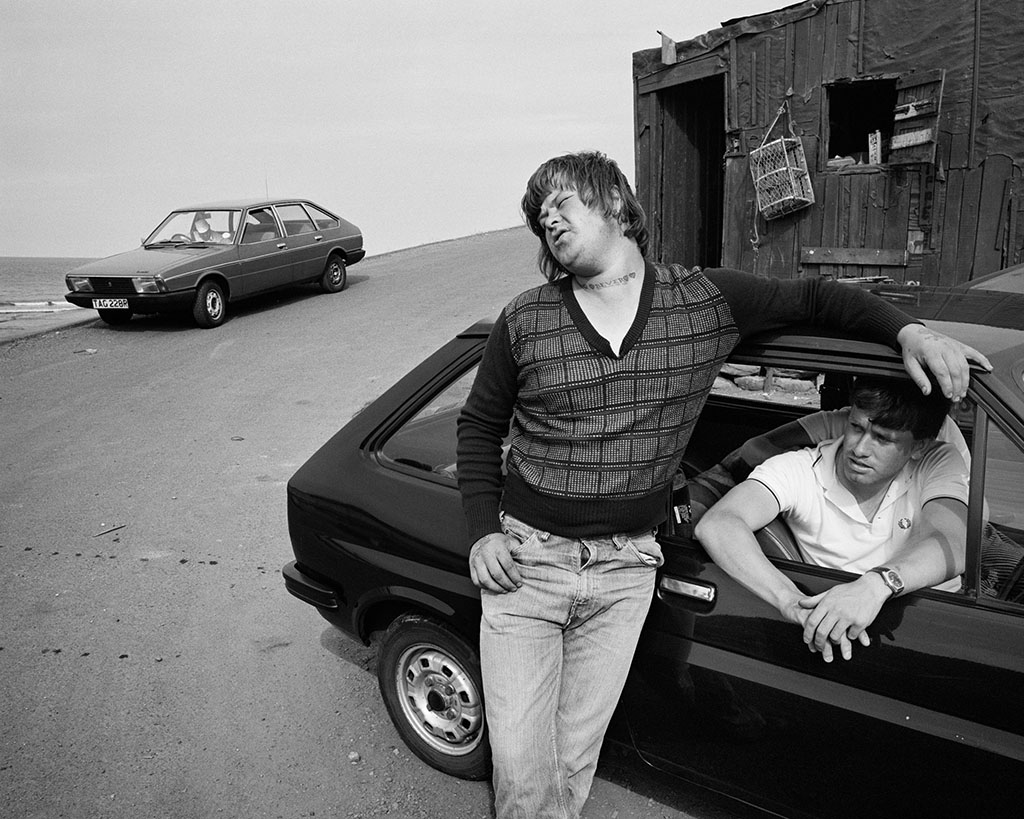 The exhibition’s starting point is Killip’s work in his birthplace of the Isle of Man in the early 70s, a mix of cinematic shots of the rugged Manx landscapes and unflinching straight-ups of the island’s rural inhabitants. It’s here that Killip started cutting his photographic teeth, first working as a beach photographer in his teens and pulling pints at his fathers pub in the evenings so he could spend the day with his camera, honing his craft. 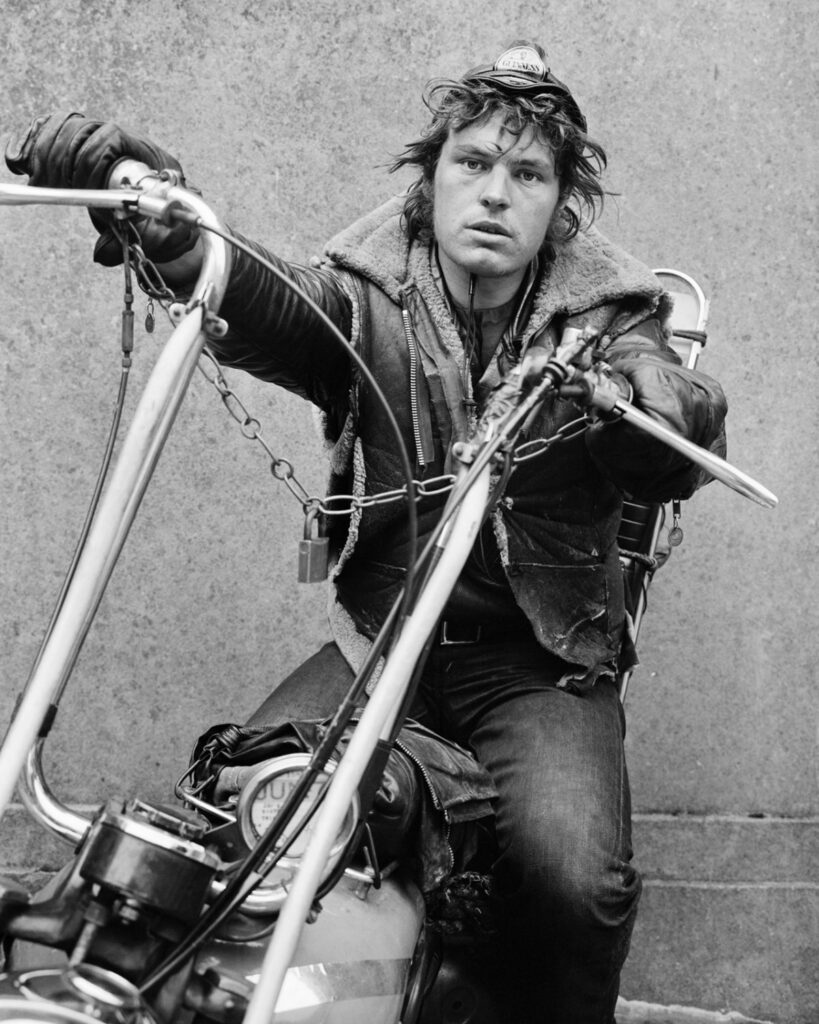 In 1972, he received a grant from Arts Council England to photograph the Yorkshire regions of Bury St. Edmunds and Huddersfield, prompting Killip’s first immersion into the lives and worlds of northern England’s working class. The imagery from this period is poignant, harrowing and notably fairly absent in the usual close up, human studies we associate with Killips work. Instead, people and the traces of their lives appear like ghostly apparitions amongst the destitute environment of their hometown; the crumbling grandeur of the 19th century cotton mills, boarded up shop fronts emblazoned with commercial advertising, empty children’s playgrounds and the slum-like conditions of the cities tenement housing. Everything is against the backdrop of ominous factory smog, the last wheeze of the region’s manufacturing heritage. 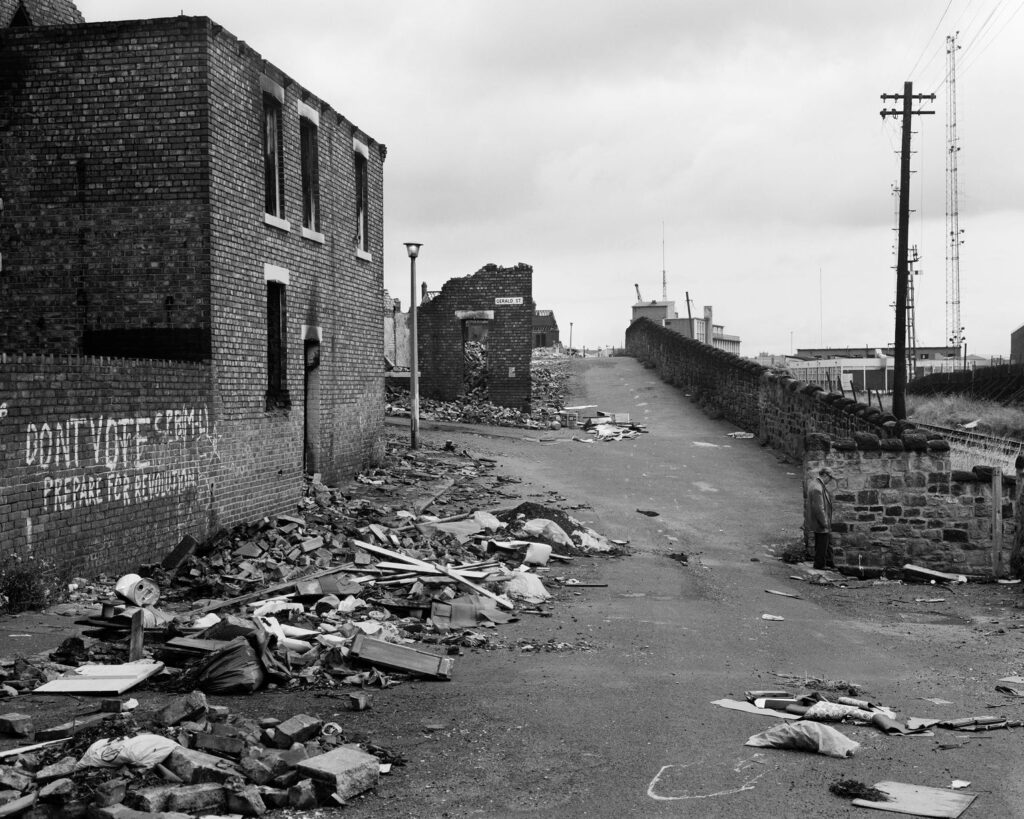 Killip moved to Newcastle in 1975 after winning a two year fellowship from the now defunct Northern Arts Council, where he created The Last Ships, a series documenting the final days of the once thriving ship building industry along the Tyne river. The series became part of a wider body of work which is considered Killips magnum opus, the seminal and era defining In Flagrante. Tragic, defiant and rousing in equal measure, the photographs from this time document “The reality of de-industrialisation in a system which regards … lifes as disposable”, in Killips own words.

Further, they stand as an elegy to the collective, cross-generational anger at this disregard at the hands of Thatcher’s 80’s government, and the many lived realities that could not be more far removed from her fever dream fantasies of stock markets, champagne lunches and shoulder pads. Portraits of miners with their families, pickets in hand at the infamous strike in ‘84. Kids playing in the rubble of crumbling streets, and youths probably only a few years older clobbered up in safety pinned jackers, spiked hair and stompin’ military boots hanging out on street curbs, bored and trying to kill time by adopting a solvent abuse habit; images evoking something of the post-apocalyptic, punk wasteland of Derek Jarman’s Jubilee. Amongst the despair, there are works which capture moments of genuine, rebellious joy, such as Killips photography of the blood and spit strewn mosh pits at the infamous anarcho-punk music venue The Station in Gateshead . Reminding us that above all, Chris Killip was a photographer who did not focus on recording the tragedies of history, but instead the resilience of the human spirit when times get tough. 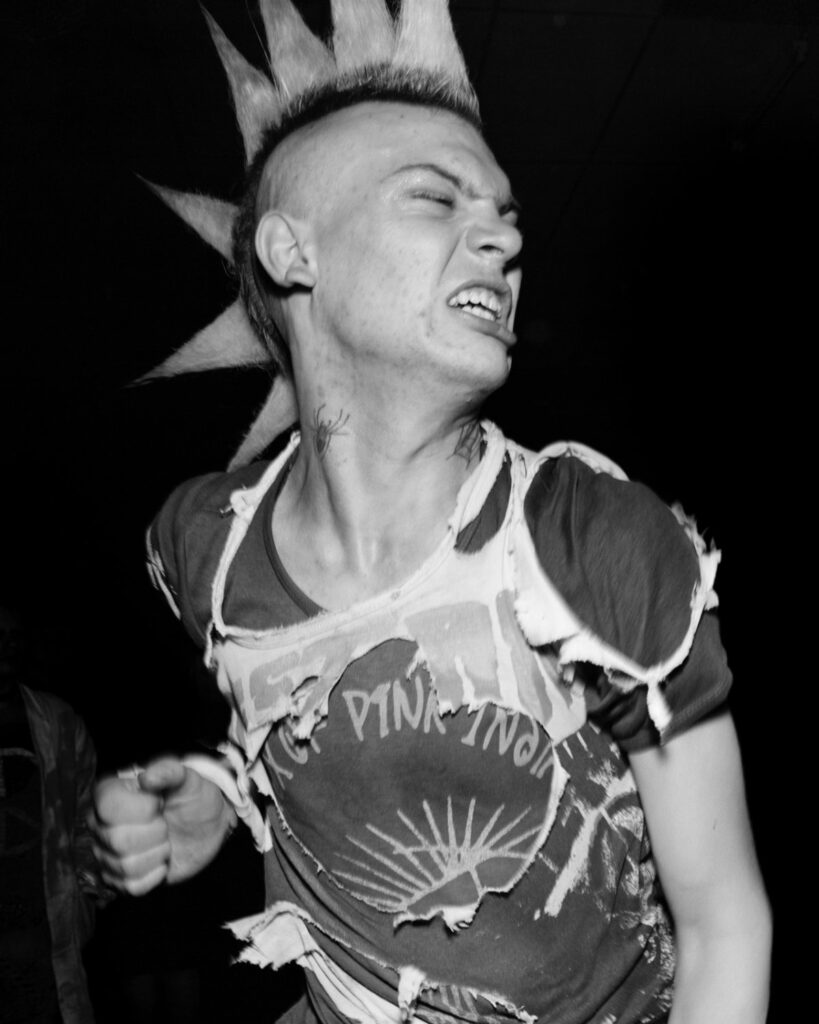 Chris Killip, retrospective is at The Photographers Gallery, Soho until February 19, 2023.

All images courtesy of the Chris Killip Trust / Magnum Photos.