DAMEFRISØR return with new single “Do You Think I’m Special” 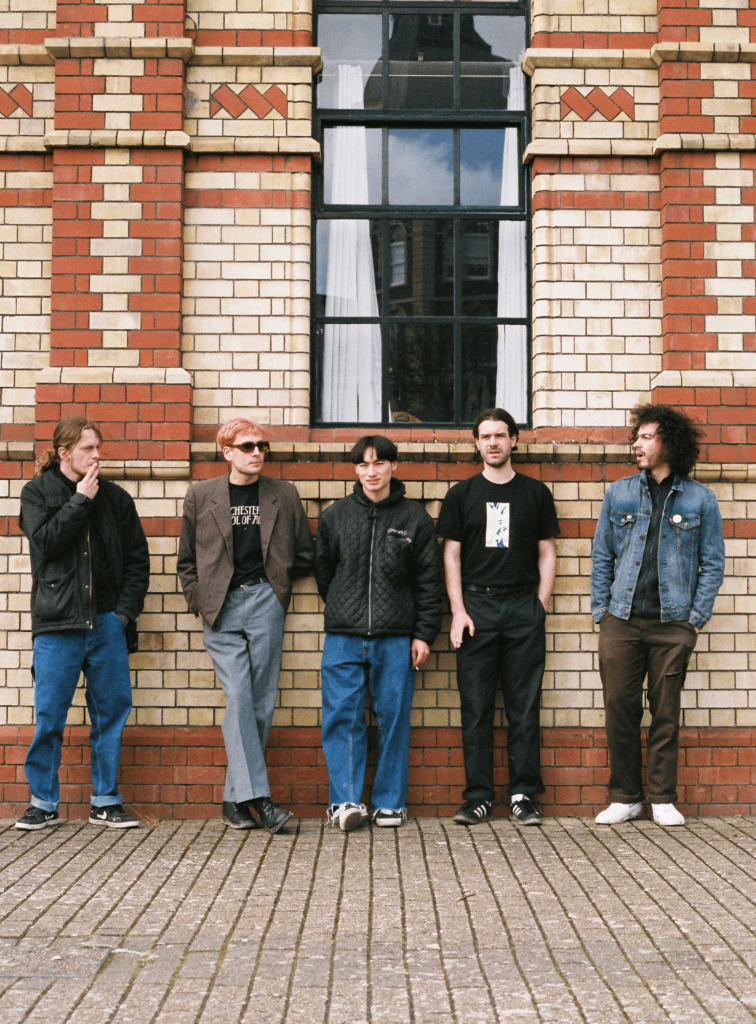 It’s been 19 months since Bristol-based sextet Damefrisor’s last release, and the world has indelibly shifted. Accordingly, as has their music. The unsettling atmosphere of earlier songs such as ‘And You Know’ and ‘Huile’ persists, yet their inherent characteristics of blurred and bleary shoegaze obscurity have been tapered; tightened. ‘Do You Think I’m Special’, released on Permanent Creeps, possesses an urgency unrivalled by the group’s previous recordings. Rapturous synth parts and wailing vocals interweave with full-throttle guitar lines; jaggedly distinguishable from preceding industrial soundscapes. In the lead-up to this first official single release, we caught up with the band (pronounced DAME-E-FRIZ-YUER) to ascertain their post-punk comparisons, lockdown haircuts and who they’d perform as on ‘Stars in Their Eyes.’

Why and when did you decide to form a band?

Jamie (Guitar): I remember being at Kazhi’s birthday party late 2018 and Nyle and Kazhi were talking about starting a band and in the merry state we were in all got hyped for it and organised a meet up for the Thursday after. We got together with Dylan (previous guitarist) and Armon (previous bassist) with Nyle on some bongos, me on my 8-year-old SG and Kazhi using a small guitar amp for vocals. Then I think we got Garin in not long after that and with the size of his pedalboard we knew we’d have a solid base to start making music that we all connect with. I don’t think it was until we upgraded to a studio space that we realised that this could be more than just a little hobby and that we could actually try to book gigs and record some songs. After the first singles we finally got Sam in on synth, his involvement has meant a larger range of sonic and structural possibilities have opened up.

Your name translates to “hairdresser”; had any dodgy lockdown haircuts?

Jamie: I personally haven’t been to a hairdresser since before the very first lockdown, so most of this year my head has been looking pretty crazy, but everyone else has kept on top of theirs. Nyle’s grown his out at the moment and Kazhi’s recently dyed his pink. I think it’s just me with the mop up top.

You’re based in Bristol, what’s the music scene like there?

Kazhi (Vocals): Bristol is such a good place to be as a band. There’s so many good bands and artists around that are a constant source of inspiration; Katy J Pearson, Squid and Giant Swan to name a few. The best thing about the scene here in Bristol, is that there’s no sense of competition between artists; it’s a very inclusive and friendly place where everyone knows everyone. People are super supportive of each other’s projects, and keen to collaborate.

With 6 members in the band, how do you ensure you all have artistic input without compromising the music?

Kazhi: Our music tends to come together in the practice room, by playing through an idea that one or a few of us has come up with. It’s important for us to be honest with each other when we’re not happy with something. It’s easier said than done, but we try hard to work together on being harsh with parts and collectively coming up with something that works. “All music written and performed by ‘DAMEFRISØR’” is how our material will always be credited because even if an individuals’ part didn’t make it onto one of our tracks, it’s always a collective effort in the end.

You’ve been compared to Joy Division, ‘Torres del Paine’ has a Suicide-tinge, do you find these frequent comparisons to musical past flattering or irksome?

Sam: ’Torres…’ was written for our friends at The Bottle (@thebottlebristol) for their Frontline EP.1 just as we entered the start of lockdown one. So, within the confines of our bedrooms, we wrote the song, sending ideas to each other over email and this is why it took a different sonic direction compared to our other work. I think being compared to past genres, and peers for that matter is inevitable, even though it would be nice for people to take our music at face value. It’s flattering we even receive these comparisons in the first place whether we agree with them or not. Plus, who doesn’t like Joy Division?

You’re about to release some new songs, can you grant us any insights to those tracks?

Garin (Guitar): We’ve got 2 new songs being released through the London independent label Permanent Creeps. We wrote them over lockdown and managed to record with Will Carkeet (Robbie & Mona, Pet Shimmers.) We had decided to explore different ideas and a new direction from our previous music as all of us have been getting into new things so you’ll hear a lot more of an electronic influence on these tracks with the use of samples, drum machines and synths. We still like to keep an element of shoegaze, dream pop, punk and post rock in the tracks but we wanted to experiment.

Your set for the ‘Help Feed Bristol’ charity live stream was brilliantly layered; I like how the songs merge into one another sonically, creating an atmosphere that doesn’t lapse in between each song. Is this continuous concept vital for you?

Garin: Thanks for watching, it was fun to play a show again as it had been a while and it was for a great cause. We like the idea of setting an atmosphere in between songs as it makes the set more cohesive and adds an extra element to the live show which was needed. Sam (synth) has recently been building modular synths so we wanted to incorporate them into the live show and by doing so we feel it’s perfect for crafting ambient sounds and textures.

On that note, it must be frustrating, especially as an emerging band, to not be able to cut your teeth with live shows. How has this past locked-down year impacted you as a band and as individuals?

Nyle (Drums) – Honestly, I don’t think any of us could really put in to words what impact the pandemic and subsequent lockdowns have had on us all as individuals or as a band. What I can say is, in some ways, it’s probably helped us all a bit, and in other ways, it really hasn’t. I’ve definitely put on a few pounds…Safe to say, quite a lot has changed for us as a group recently, there’s been many traumatic moments over the last 18 months and there’s also been some gems too. One thing for sure is that we all can’t wait to get back out there properly and show everyone what we’ve been working on!

You’ve got a song centred around stars in their eyes (!) – If each of you could appear as anyone, who?!

What does the rest of the year have in store for DAMEFRISØR?

Nyle: To regain some normality in the sense of the things we miss. Playing normal shows again, partying, seeing friends and family we haven’t been able to. We also hope that there’s a lot of change in the world, whether or not that’s because of the pandemic, the world has needed for a lot of things to change and I’d like to think maybe that’s starting to happen? There’s still a long way to go though, and a lot more work for us all to do. What I can say is we’ve got a few shows lined up at the moment, hopefully more of those to come. Lastly, keep your eyes and ears peeled for a couple new singles which will be with everyone very soon!