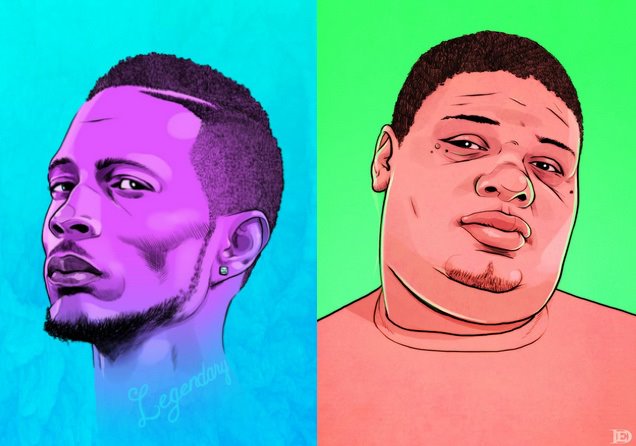 North London based Dan Evans has made strides in the arts industry with his extraordinary visuals. Growing up listening to garage music, R&amp;B and with influences by the likes of Dizzee Rascal, Wiley and Kano, it’s clear to see these influences in his artwork. His rendition of grime artists using vivid Technicolor is one we’ve never seen before and fitting for the bright outlook for grime.

“It’s brilliant to see Grime music being recognised more widely these day, with the artists getting more coverage and more respect for their work. When you see Skepta performing with Drake &amp; Stormzy getting 30mil plus views for his YouTube freestyles, you can see how much recognition the scene is getting beyond the UK”

Dan has illustrated for the likes of Noisey and also create pieces for top East London venue Birthday’s where his work is featured on the walls, with some made into masks which was kind of a surreal moment, but it’s safe to say that was a breakthrough in the talented illustrator’s career. Dan’s consistent hard work and almost ubiquitous art has gained him more grime related work and big ups from some of his favourite artists.

At the moment, Dan has got his hands full working on a super hip hop project with Trap Toys, producing a series of Hip Hop action figures with names we just couldn’t make up! There’s Eazy-He, a potential re-release of RoboPac and for us Brits, Spider-Mandem produced with Richt. In the words of Dan himself, “It’s f**king lit”!