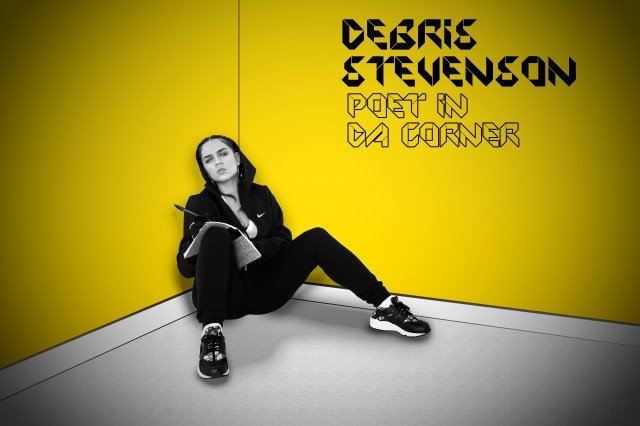 His hands smothering like hot honey / shrieks wrangled with throats like fists</em>..” – clear, audacious and stood aplomb in front of the audience; her words rang loudly across the small room for her performance at the Apples and Snakes live poetry talk show. It was this video, amongst many others, that caught our attention and introduced us to the bright young talent of poet Debris Stevenson.

The East London raised poet initially started off briefly as an MC but turned her career path to poetry at 16 upon seeing friend, poet Kayo Chingonyi perform. Four years later, Debris set up Mouthy Poets – a writing, performance, and events collective for young budding creative talent. Debris has since spearheaded 12 shows and a national tour with the Mouthy Poets collective, including several shows in partnership with the german sister collective she helped set up, Loewen.

Having garnered attention for her work with Roundhouse and a 2 year documentary with Channel 4, Debris has gone on to be at the helm of producing and hosting, Turning Point, a 3 day festival curated by young people at The Roundhouse. To add to her many credentials, she has also become the co-leader of the Roundhouse poetry collective (where she started performing 9 years ago), who facilitate weekly workshops and has had her work featured in publications by organizations such as Oxford University and Louis Vuitton as well as her own pamphlet series entitled ‘Pigeon Party’ with Flipped Eye. Her work covers and carefully deconstructs scenes and issues within race, sexuality, and mental health and subculture music genres, through emotive driven poetry.

Debris has racked up quite the tour repertoire performing at venues such as London’s ICA, Roundhouse, National Theatre Zagreb and to thousands of ears across the UK, USA and Europe. Not restricted to venues, Debris’ work has been featured on BBC 1xtra alongside Grime’s princess (or Queen some may argue) Lady Leshurr and BBC Radio’s The Verb.

The multi-talented poet continues to establish the poetry scene in the UK, especially underprivileged young people through Mouthy Poets, mentoring, lecturing at the University of Nottingham, and gracing audiences all over the world with her extraordinary poetry.

Debris is currently preparing for her headline show at Roundhouse on the 27th May entitled ‘Dirtee Verse’, as part of the Poet in Da Corner project. The show will see Debris interpreting the grime scene through spoken word alongside grime producer Rapsz Katai and Grime MCs Jammz and Eklipse with whom she’s also working on an album with. Also on the bill are grime inspired poets Kayo Chingonyi, Charlie Dark and Raphael Blake.