From the Underground Book Collection: Defying Gravity by Jordan Mooney and Cathi Unsworth 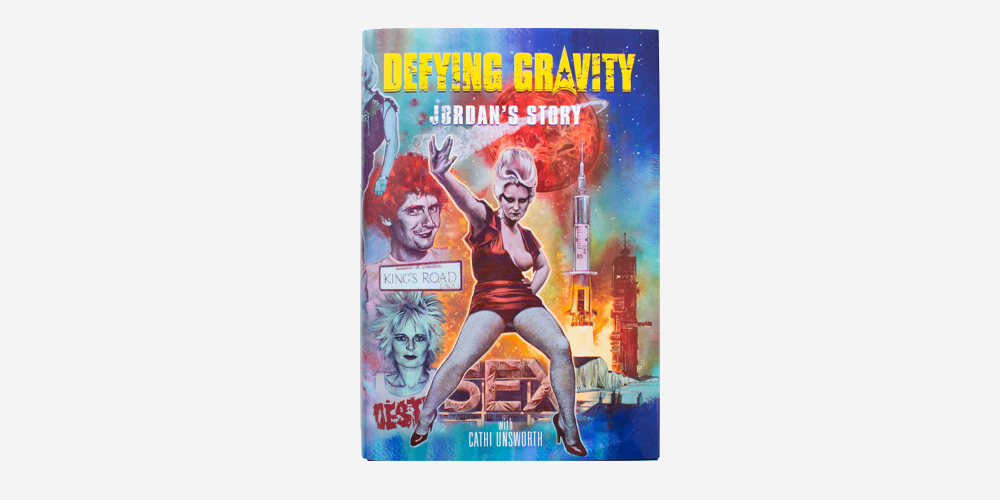 “Jordan created punk rock. She was selling it on the front line”- Adam Ant

Caught up in the chaos as anarchy began to sweep the UK, Jordan Mooney (real name Pamela Rooke) was at the centre of the movement. Originally a ballet student from Sussex, Mooney found herself making a journey through the gay clubs of Brighton to King’s Road in London – the epicentre of punk.

Her story gives a fascinating insight into the whimsical life she led with the distinctive likes of The Sex Pistols, Adam and the Ants, Derek Jarman, Andy Warhol, Vivienne Westwood and Malcolm Mclaren. From her childhood set on the Sussex coast (1955-66) to her self-described rise “from the ashes of chaos” in the late ’80s, the autobiography documents the rise of punk and the fall of Mooney’s mental health, along with her escape to normality and balance. Her honest outlook shines through as she describes how she unintentionally became the face of punk.

A pillar of the punk community, Mooney also managed an emerging band of the time, Adam and the Ants. It was through this that she met and married Kevin Mooney their guitarist, whom she eventually divorced due to the increased use of drugs and the hedonistic lifestyle they led. She knew this all too well, describing drug-taking as “dicing with death”, as naturally, you can’t ever be sure what the ‘drug’ contains. It’s a harrowing reminder of the lesser-known, darker side of punk. From Kevin selling her clothes for money to hurting her cat due to a drug-induced haze, their relationship has gone downhill and toxic.

The book concludes with her later life, where Mooney upped sticks in the mid-’80s and moved on from London, returning to Seaford to train as a veterinary nurse and breed cats. Despite this, she will always remain a central character in the history of the genre.

It may be Mooney’s story, however, a multitude of others also lend their thoughts to illustrate the punk scene of the time and Mooney’s involvement, including Westwood, Paul Cook (Sex Pistol’s drummer), Marco Pirroni (Adam & The Ants’ guitarist), Holly Johnson (Frankie Goes To Hollywood), and Michael Collins (SEX). In which they all agree, Mooney’s success stemmed from her authenticity.

Defying Gravity is for those who would like to wistfully relive the nostalgia of the punk era, or for modern-day punk fans who want to experience life through the lens of a pivotal woman of the period. Full of anecdotes and images that have never been seen, her story is beautifully told and will be remembered for years to come – one of punk’s crucial figures, immortalised in print.

“As Jeannie said, I never turned down a challenge, never compromised my belief in always doing something to the best of my ability. I wanted to dance and I did defy gravity”- Jordan Mooney

Buy Defying Gravity by Jordan Mooney from our online bookstore

Interested in learning more about the punk music scene? We also recommend: Revenge of the She-Punks by Vivien Goldman and Patti Smith: A Biography by Nick Johnstone.