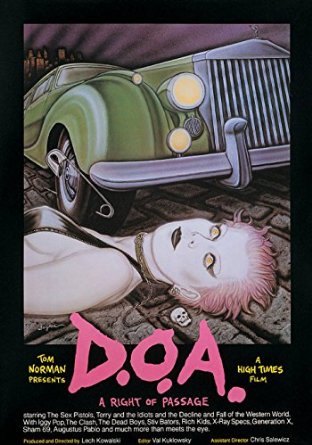 “An awful lot of people who enjoy punk would really like to be back in those days when they could actually see physical people hacking each other to death”. If you’re one of those people, then you will definitely be interested in the screening of D.O.A: A Rite of Passage screening in Dalston, London on the 19th May 2016 at 6:30pm.

This ‘rockumentary’ is part of the Doc’ n Roll Festival’s Sounds of London season, which is a three month long celebration of London’s musical history, consisting of fourteen films. This film is a 1980’s documentary directed by Lech Kowalski, which is all about the origin of punk rock. Kowalski goes on a punk journey with The Sex Pistols, as he follows them throughout their tour of the United States in 1978. The one and only tour of the US by the Pistols and it ended with them splitting up. So it is obvious that this film is iconic and historic as it serves as a portal into that punk era right before its end. Viewers will get to experience what it was like to live right in the midst of punk, both behind and in front of the stage. Raw and real, Kowalski filmed the documentary on a handheld 16mm camera, demonstrating true punk authenticity as he films without any extra polish.

The film shows footage from the concerts, as well as a behind the scenes look. It also has interviews with the audience at shows, and interestingly shows their mixed reactions about the music. Although focusing mainly on the Sex Pistols, there are performances from their contemporaries such as The Dead Boys, Generation X with Billy Idol, The Rich Kids, the X-Ray Spex and Sham 69. There is also music from Iggy Pop, The Clash and Augustus Pablo.


There are many things that make this film special, especially the famous interview of Sid Vicious and Nancy Spungen in bed. This cult classic is Kowalski’s premiere film as a director and it hasn’t been shown in the UK since the 90’s. Not only that, but there is also a Q&amp;A with the screenwriter and assistant director of the film, Chris Salewicz. Check out the Doc’ n Roll website for more information!