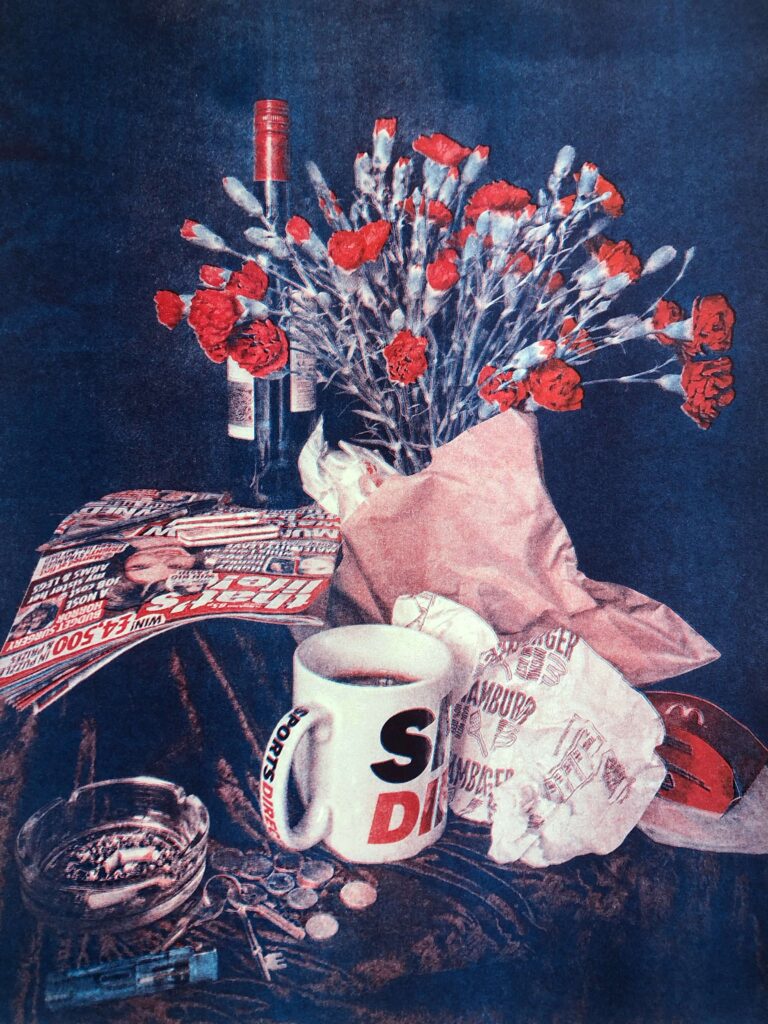 What’s next after your graduation? Are there any upcoming projects or galleries/exhibitions?

A good question: my work has been featured in three independent London exhibitions in the past two months which is great. CSM has done very little about a physical degree show so it’s catalysed a bunch of student-led independent projects, which I think is really cool to be involved with. I’m exhibiting in a show I’m really excited for (@_at_odds) held at TOMA space in Southend-on-Sea. It’s a group endeavour that aims to playfully critique the gallery format and make work more accessible to a wider audience – quite anti-establishment but in a soft way.

More generally, I am mking renovations to my houseboat that I bought with my partner this year, so lots of energy is going to be put into that labour of love.

Within your university work you have questioned and critiqued themes of power throughout society, whether this be in relation to gender or class, what drove you to explore these themes throughout your work?

How have these themes personally affected you?

I think power influences almost everything we experience; it is one of those things that you can critically identify and then cannot stop seeing everywhere.

The society we exist in is made up of structures with integral systemic power imbalances, so it affects every aspect of our existence whether it is to your benefit or to your detriment.

If you deviate from the norm by any degree, power will be unevenly distributed for you. Diane Ponterotto says this point far more eloquently (in ‘Resisting the Male Gaze: Feminist Responses to the “Normatization” of the Female Body in Western Culture’).

She simplifies the human condition into condition/non-condition, e.g., being straight/not straight or white/not white etc. anyone who experiences anything outside of the condition will experience power and influence far differently- often oppressively.

I am interested in it artistically because I find the presence of a power structure within artworks compelling, especially within performance works. the artist often constructs and abstracts power imbalances that are experienced normatively, by reformatting these dynamics and experiences to an artistic setting people who usually feel unaffected by the power imbalance start to critique or comment on the wider power dynamic it represents with an element of empathy. (An immediate example that comes to mind is Tatlin’s Whisper #5 by Tania Bruguera)

Experimenting with human response and reaction is unpredictable, and I am always curious about its outcomes.

Do you have any current artists or figures that inform your work?

Yes, I mean at the moment I guess it is less formal artistic influences and more familial, I think a lot about the alternate version of myself who never came to London and who is probably engaged and working a full-time job in my hometown. I have a lot of love and respect for that person, so she is a figure that influences me to some extent; this hypothetical being of what I could have been and what she looks like.

A lot of your work is centred around your family, how has your relationship with your family influenced your work? Within your Still Life piece, you take your grandad’s table as a direct influence, what is the reasoning behind this in particular?

Family can be a bit tangled up for me, complex ideas manifest from very boring everyday scenarios, you think about your family and then you are accidentally making a comment on class experience and the patriarchy. It is just setting I suppose.

My immediate family is small and the rest of it is chosen, so because there is less of the automatic connection I have given ‘family’ as a construct more thought: examining relationships/dynamics more closely because they were not necessarily permanent or normative.

The RARELY STILL LIFE vanitas accidentally referenced class, I thought about what you would find on a coffee table in a home -my mother is a very house-proud lady, so the only thing on the coffee table is the tv remotes, but outside of that- the coffee table is like a pinboard or a to-do list. it is the leftover shit from last night, and it is where you look for a pen and for your keys. It is a vanitas in itself accidentally. and I think this work just over-exaggerated that, put it into a format that is familiar in an art setting. 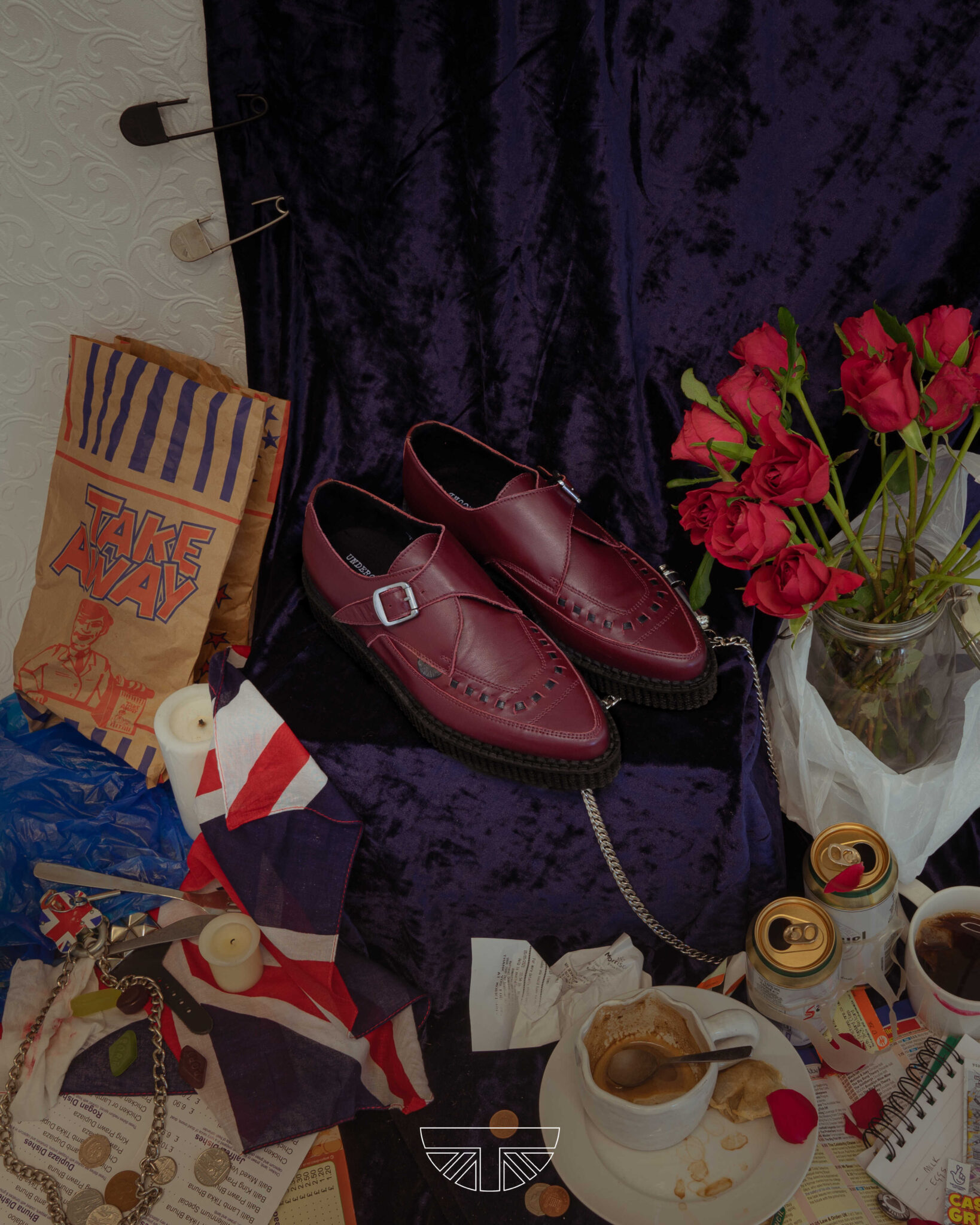 Underground is a brand that prides itself in its authenticity, there is an authenticity to your work, especially in the themes and inspirations behind it, how important is this value when creating art?

I think it is quite difficult to be inauthentic with art, as long as you truly fuck with what you are making there will always be an element of passion to it that automatically feels authentic.

I also think it is quite easy to spot because inauthenticity lacks some kind of soulfulness. I have absolutely nothing to back up that statement, but it just does. You can make something that looks like absolute trash, but it is completely transformed if the maker is confident in their idea. So, you can tell when someone has clocked out of making something, you can feel when the confidence has faltered. 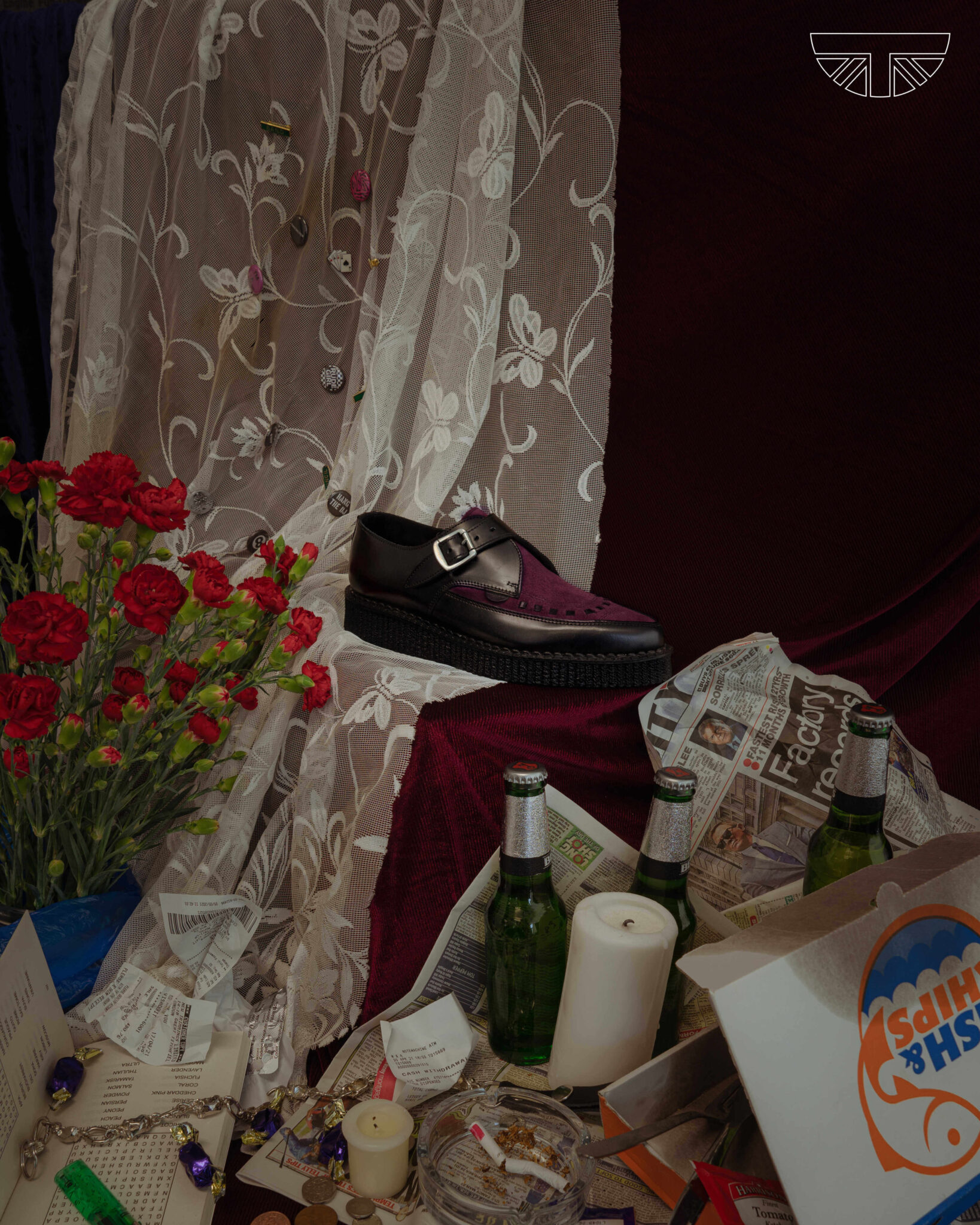 Within the set dressing for the Still Life images, the choosing of the objects seems to be very particular, is there a reason for this?

Is there any specific object/s that are meaningful or symbolic to yourself?

The content of the image is specific because it is drawn from a specific set of memories and lived experiences, for me, nostalgia is best instigated in small details. But I do not consider any of the items particularly symbolic, they show some kind of human presence which I think is important. Although physically static they are dynamic, they imitate and exaggerate the lived experience of a ‘rarely still’ life.

From the images of your Still Life, you have started to experiment with print, is this something you are going to further explore within future projects, and if so, what draws you to it?

I mean Riso printing has historic links to protest and mass media distribution. It uses layers of colour to build image depth and is a super quick process with a really beautiful finish. the print you can see is using only red and blue ink.

I used print here purely to occupy physical space quickly and easily. it is super cheap to produce a bunch of poster-sized prints, and so I just pasted them up around places near me. the pandemic has reduced a lot of art to a digital realm, and I feel it is good practice as an artist to take up space where you can.

(I have also gifted prints to anyone who has asked, so they have infiltrated domestic space too ha-ha.) 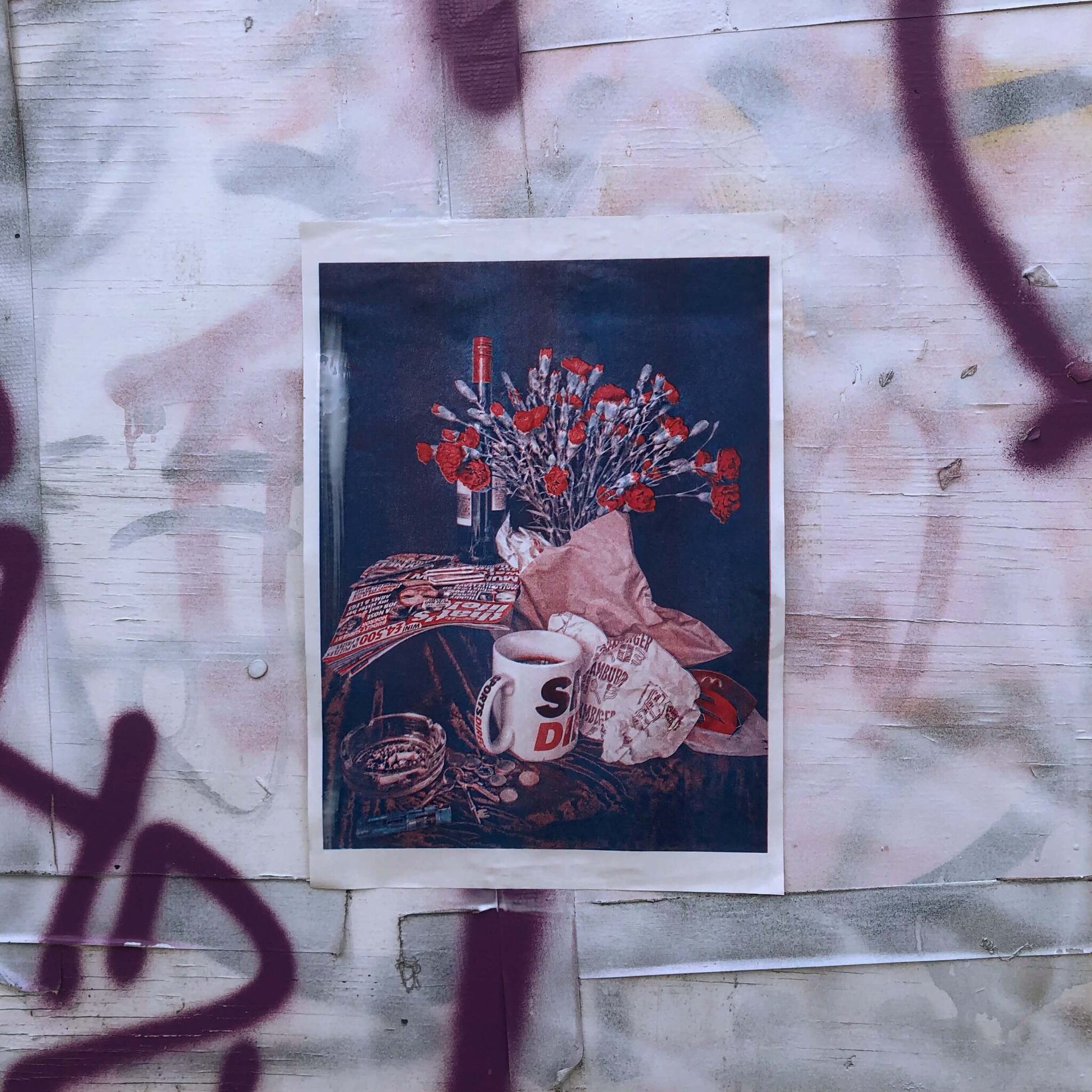 You said that the Union Banner series is one that explores your family and the ties that they have to the working class, when wanting to explore themes of this, what was your interpretation that led to this outcome of work?

Class seems to transcend monetary value a lot of the time, I think it is part of your social and cultural development. different dialect, attitudes, and ways of socialising all informed by your peers.

An example being; if you have grown up affluent, you might have hobbies and interests that were inaccessible to families with less disposable income- skiing holidays, fencing after school, being part of a golf club. You are drawn naturally to groups with the same interests/morals/upbringing, and these are often class identifiers. You ‘out’ yourself as working class by the kind of things you like, your perceptions and responses, your whole experience of the world.

I am a product of mad social mobility which has enabled my brother and me to be the first to attend university in our family. (It is a wild contrast to my dad’s experience with education which refused him entry to school because he did not own any shoes.)

University opened my eyes to a wealthy majority I did not even notice I was not part of. My parents had somehow shielded me from the idea of a wider class system. My take on wealth was informed only by working-class experiences; my grandparents were really poor, my parents really poor, and so if we were poor, I did not notice because in comparison we were living lavish.