END OF THE CENTURY – THE RAMONES 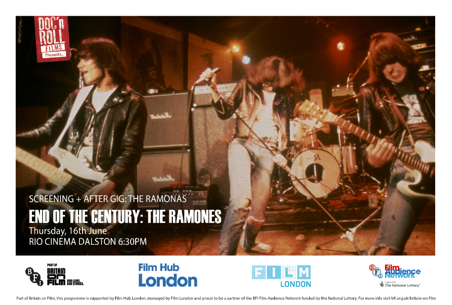 Doc’n Roll Film Festival wraps up its current music film season called Sounds of London, in classic NYC punk style with the definitive music doc End of the Century: The Ramones, screening at the Rio cinema in Dalston.

The Ramones´ first UK gigs took place at the Roundhouse and Dingwalls in July 1976. Among the audience were members of The Damned, The Sex Pistols, The Clash, Chrissie Hynde and Vic Godard. These electrifying performances would mark a turning point in the fledgling UK punk scene. The Roundhouse gig was attended by many of those who would go off to set up their own bands, punk zines or for those who had already set up their bands, it was the cue to go faster.

To celebrate 40 years since these raucous New Yorkers exploded onto a drab and tedious rock scene, Doc’n Roll are delighted to bring The Ramonas to Birthdays for a free after-party.

As the name suggests they are a kick-ass all female tribute to the iconic Punk Rock band.

Buy a ticket to the film screening and gain free entry to the after-party with your cinema ticket at Birthdays.


Doc’nRoll are a London based organisation that is discovering, supporting and exhibiting compelling music stories