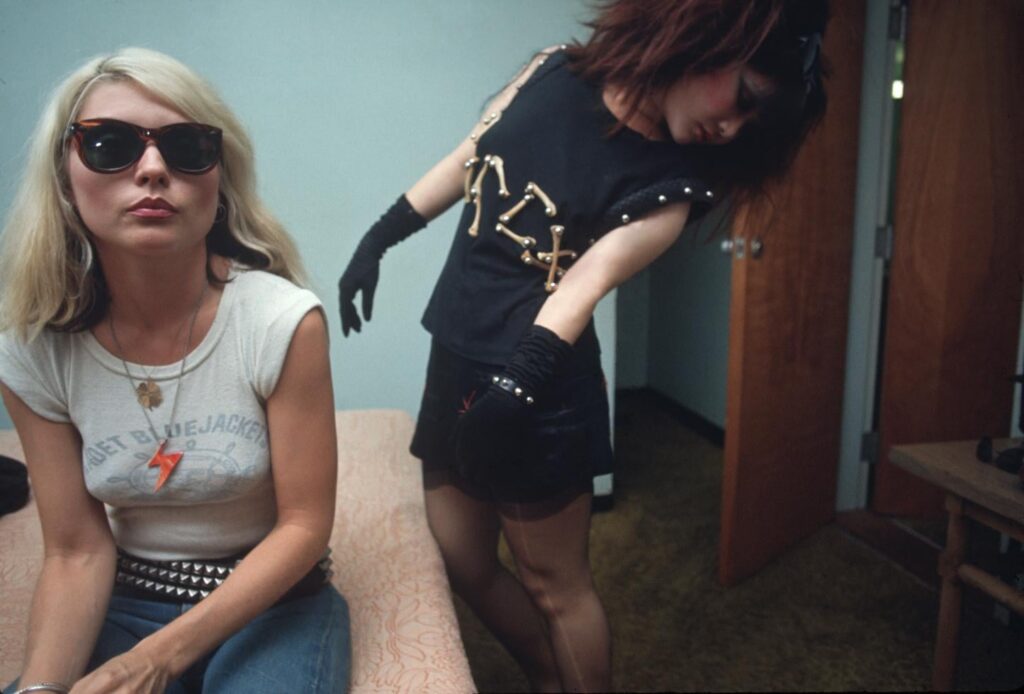 The second instalment in our series investigating overlooked or obscured figures in musical and subcultural history delves into the short and spectacular life of New York no-wave luminary Anya Phillips.

Her name may not summon instant recognition – but if you’ve any interest in the music scene of 1970’s New York, you’ve surely witnessed Anya Phillips and her pioneering influence. Stilettos, kohl-rimmed eyes and a mop of black hair, chances are you’ve seen Philips photographed alongside James Chance (of The Contortions) or wearing a Seditionaries chicken bones t-shirt beside Blondie’s Debbie Harry.

Philips’ ‘seven hints for boredom alleviation’ provide an uncanny insight into this ambitious and, at times, frightening character:

7. Beat up that “someone you always hated (so what if she’s the wife of the record company executive” 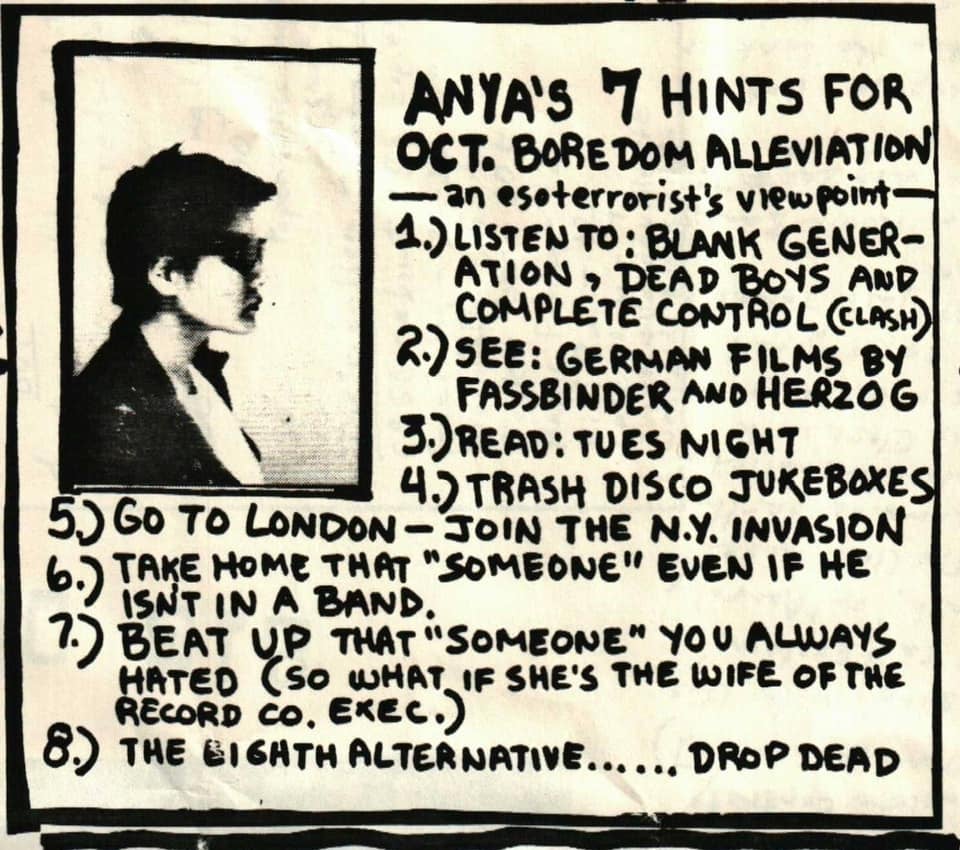 Believed to have been born around 1955, Anya spent her early years in Taipei after her mother fled there following the Chinese Communist Revolution. Having separated from Anya’s father, Anya’s mother remarried Wade Phillips, an American army colonel (their son, Fei Xiang, grew up to become one of China’s most famous popstars of the 1980s.) Having grown up on US military bases and attending American school, it wasn’t long until Anya relocated to the States with Sylvia Morales (later to become Sylvia Reed following her marriage to The Velvet Underground’s Lou.)

Initially awarded a full scholarship to Parsons School of Design in New York, Anya dropped out of her fashion studies; renouncing a traditional routine for self-governing her own radical designs.

Unfazed by her lack of sewing skills, Anya adapted by tying strips of material together, producing latticed and laced-up garments sensational in both colour (lurid pinks and bright blues) and shape (lopsided, revealing forms.) Anya’s cutting edge, cut-out material manipulations became an anti-uniform for many figures of the time. A friend of Debbie Harry, Anya Phillips designed many ensembles for the Blondie front-woman, including the shiny pink dress depicted on the LP cover for Blondie’s 1977 second album (the dress was later immortalised in miniature, when a Debbie Harry Barbie doll was produced clad in the same fuchsia frock.) Anya’s inventive designs can also be found on the cover of The Contortions’ 1979 debut ‘Buy’ featuring model Terence Sellers in a taut, spider-web ensemble. No-wave saxophonist James Chance described Phillips, his then-girlfriend and manager, as “starting the whole New York scene” which was often playing catch-up with Anya’s sophisticated taste.

A resourceful polymath, Anya didn’t merely design clothing for album covers but supervised and shaped musicians – from Lydia Lunch (briefly) to James Chance and the Contortions. Styling the band in 1950’s do-wop suits and harnessing her shrewd publicity skills, many have attributed the rise of The Contortions to Anya’s acumen; as noted by Debbie Harry “She was a great business woman [and] a powerful energy source” (Making Tracks 1982.)

However, perhaps what cemented Anya’s place at the centre of the New York scene of the late 70’s and early 80’s was her role in the Mudd Club, the downtown destination that was an allergic reaction to the slick and sleek Studio 54; an amalgamation of a 1930’s Berlin cabaret and the sleaze of CBGBs.

In a rather absurd, and therefore typically characteristic tale, The Mudd Club came to fruition when Anya portrayed Priscilla Presley in an independent film. During production, Anya and art curator Diego Cortez pitched their idea for a multi-disciplinary downtown nightclub to cinematographer (and funder) Steve Maas. Located at 77 White Street, Tribeca, The Mudd Club opened in 1978, a six-story loft where each floor offered a differing, dizzying, delinquent dimension. A loft painted black with a stage; a floor of school desks and diner booths, a human-sized cage, bathtubs filled with beer and gender-neutral bathrooms; this was a place where Keith Haring curated an ever-changing gallery and records were scratched to unnerve attendees.

A haven of eccentricity and exclusivity, the notorious doorway was presided over by Richard Boch (whose 2017 memoir depicts his stint as Mudd’s decisive doorman) ensuring that street urchins and young up-starts were on the same wavelength as the renowned (Bowie, Jagger, Warhol) and the soon to be (Jean-Michel Basquiat, Jeff Koons, Robert Mapplethorpe.) A crucible of decadence, deviance and dissent, The Mudd Club played host to Debbie Harry’s singing, Klaus Nomi’s theatrics and Allen Ginsberg’s poetry. Poison Ivy collapsing on a couch post-performance; Fab 5 Freddy rapping; Johnny Thunders strumming: here, clubbing gave way to creativity and creativity gave way to clubbing. This was the “place that birthed the eighties” and amongst it all was Anya’s discerning glare. “Anya was a sort of creative director,” remembered writer Glenn O’Brien, “The Mudd Club did a lot of themed events…they would redecorate the entire club. She was instrumental in that. Basically, she set the tone artistically.” Some scraps of visual documentation remain (the Mudd Club was clandestine in the sense that it had no advertising or merchandise) showing Anya leaning against the bar with Iggy Pop, or sprawled beside Dee Dee Ramone and Nancy Spungen (before she went blonde.) As described by Sylvia Reed, Anya was “incredibly difficult, incredibly talented and incredibly troubled.” Glenn O’ Brien recalls a Mudd night where Anya hit a girl, entirely unprovoked, because she didn’t like the way the girl was dancing (perhaps Anya was heeding her aforementioned boredom cures.)

As is the case with spirited, fast-burning projects, the Mudd club was blighted to be ephemeral; it dwindled until its eventual closure in 1983. Anya was to meet a similar fate to the den of audacity she’d helped create.

Anya has previously sung on James White and the Blank’s 1979 Off White album, donning the name ‘Ginger Lee’ to credit her rendition of ‘Tropical Heat Wave’, a song popularised by Marilyn Monroe. According to James Chance, Anya had plans to record a “sci-fi disco funk album” about the destruction of the earth using her Ginger Lee pseudonym. Song titles prepared and ready to record a demo, Anya’s musical project was cut short by her cancer diagnosis. Anya Phillips died on the 19th of June 1981. Aside from her death being noted in a short obituary in Rolling Stone and commemorated in a James Chance dedication for his 1982 Sex Maniac album, Anya’s influence has since been neglected.

As noted by Sylvia Reed, Anya’s plans stretched beyond the punk scene. She had a desire to develop her own fashion label, despite having apprehension about her status as an Asian immigrant seeking fame and fortune. “I think now about Anya who so briefly illuminated this fleeting world” recalled poet and Warhol disciple Rene Ricard:

“I think about clothes worn by people so recently and yet how long ago it all seems that Anya would show up in those cocktail dresses…and now all the girls in their cocktail dresses have never heard of Anya and how quickly each generation watched the look of its creators and forgets the moral underneath.”

The word ‘influencer’ is a tawdry dirge of a word, but to take the term back to its origins – to command culture and to inform and stimulate many – seems a fitting label for such a visionary. Entirely provocative – she was known to have kept her diary in the bathroom for people to read of her conquests – and unashamedly resourceful, next time you find yourself bored, think of what Anya Phillips would do.

(Read our first ‘Ever Heard of…’ feature HERE, which examines the enigmatic Su Tissue of LA post-punkers Suburban Lawns.)