Ever Heard Of… MALARIA! 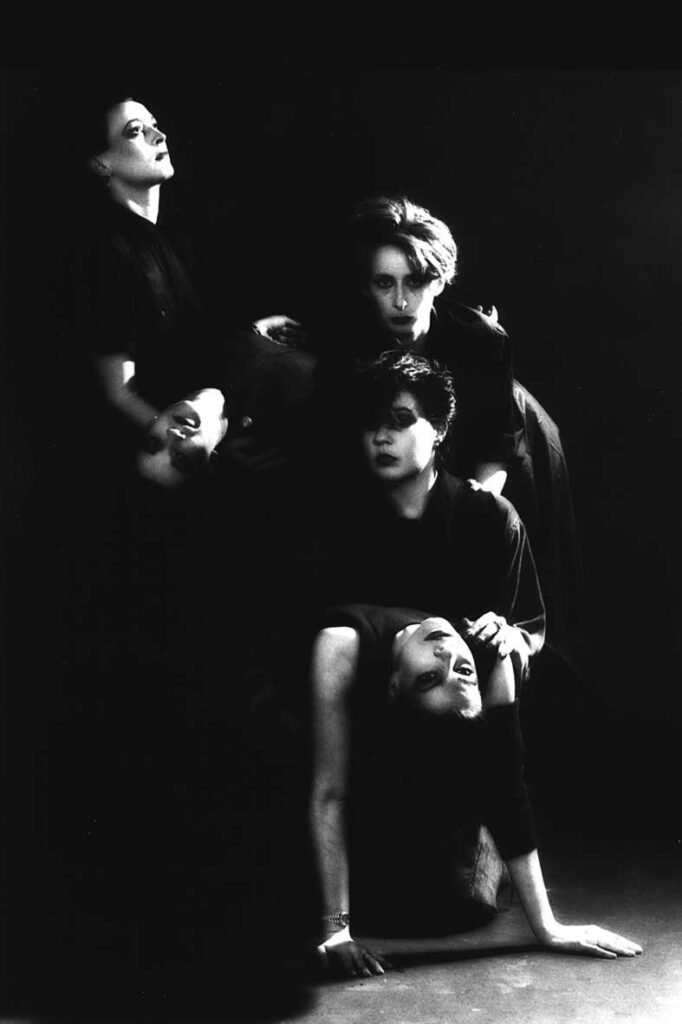 The next instalment in our series investigating overlooked or obscured figures in musical and subcultural history takes a look at Malaria!, an all-female post-punk band borne from the divisions of West Berlin.

Footage of Malaria! is sparse, yet the Super 8 film accompanying their song “Your Turn to Run” provides an accurate depiction of the group and their dark surroundings. Set against menacing saxophone and guitar lines to make your hairs stand on end, the band take over a burned-out car.

The video flits between androgynous, enraptured figures with red lips, pale faces and upturned collars, their black clothing stark on red satin and the blacked vehicle.

Here, both sound and vision create an unsettling atmosphere of dark excitement unique to the West Berlin of the early 1980s.

An enclave within East Germany, West Berlin residents were exempt from military service, meaning West Berlin became shelter for those on the fringes of society. From the hedonism and squats of one side of the Berlin Wall came a glut of artistic endeavour. ‘Geniale Dilletanten’ (the Brilliant Dilettantes) is a term often affixed to Malaria!, and to the German underground of the early 1980s. Stemming from art school experimentation, ‘Geniale Dilletanten’ pushed creative boundaries against the backdrop of nuclear threat.

Super 8 films, fanzines, cheap synthesisers and drum machines (sometimes household appliances were substituted for instruments); this was the Berlin avant-garde. ‘Neue Deutsche Welle’ (German New Wave) is another term associated with this time; a re-imagining British Punk and New Wave with harsh, German enunciation and electronic drones, ‘Neue Deutsche Welle’ encapsulated Cold War Berlin before degenerating and diluting to commercialism. Of course, these terms are sweeping categorisations of a movement which was, by definition, forever shifting; ‘Geniale Dilletanten’ was characterised by expression and experimentation rather than rigour. Upheaval was a catalyst for creativity; the Malaria! rehearsal room was shared with Die Haut, who lived in an apartment with The Birthday Party; musicians continually rotated between groups. Here, the context of West Berlin is vital: Malaria! were a product of their environment.

The origins of Malaria! lie with another band of the same initial: Mania D. Gudrun Gut, a member of both Mania D and Malaria! left the sterile, ordered cleanliness of West Germany for the mad frenzy of West Berlin in 1975. Gudrun, alongside her friend from university Bettina Köster (who went on to provide vocals and saxophone parts for both bands) opened a concept shop – Eisengrau – in Golzstraße. Aptly translated to ‘iron grey’ in English (if Mania D or Malaria! were subject to synesthesia, the music would certainly be iron grey), Eisengrau was not merely a store for Gudrun’s innovative knitwear, but a meeting place for the emerging music community to exchange ideas. Selling dyed shoes, T-shirts from New York, fanzines, clothes from independent Berlin designers and bootleg tapes, Eisengrau was as eccentric and eclectic as the people who frequented the shop.

It was at Eisengrau where Gudrun and Bettina met Beate Bartel. Both Gudrun Gut and Beate Bartel had a brief stint as founding members in Einstürzende Neubauten, Bad Seed Blixa Bargeld’s experimental, industrial group. In May 1979, Gudrun, Bettina and Beate joined forces with Eva-Maria Gößling and Karin Luner (who received percussion lessons from Lou Reed’s drummer, Fred Maher, whilst shooting Super 8 films in New York) to form Mania D; an all-girl, half-improvisation, underground band. Merging free jazz with New Wave, Mania D were as resourceful as they were visually striking; surviving stills from Karin Luner’s 1979 film ‘Fashion Interlection’ shows the girls in hand-made emerald green dresses, their hair styled with a mixture of beer and egg (substantial styling products were unavailable.)  Mania D was championed by the legendary radio show host John Peel, deeming the band “queens of noise” in 1981, yet by then the group had already dispersed, as stated by Gudrun Gut “as spontaneously as we came together, we went our separate ways again soon.”

Beate Bartel went on to form Liaisons Dangeruseus (a pioneering electronic group) as Bettina and Gudrun reformed as Malaria! enlisting Christine Hahn (who became Malaria’s second drummer), Manon P. Duursma (who had worked with Nina Hagen) and Susanne Kuhnke (of Die Haut.) With a line-up abundant with avant-garde talent, Malaria! amalgamated its members diverse backgrounds with an aim to revolt against the overproduced music they heard on the radio. Malaria! wanted to break up the rules of music, as said by Gudrun Gut in a later interview, “Originally, I learned classical guitar, but in punk times – with Mania D and Malaria! – we all decided to play instruments for which we were not educated.”  The resulting sound was a cacophony of cold wave; music like glacial sleet on metal scaffolding. A rare clip of live footage shows Malaria! in all their chilling and thrilling glory, guitar like a siren, a marching percussive pulse and lyrics of a “subhuman roar” wholly suited to Bettina Koster’s deep vocals and throaty wails. The video sees the androgynous band donning black garments and stomping boots – “we were always wearing heavy boots. We were strong women, not delicate fairies, we wanted to make a point of that” Gudrun later remarked.

Singing of capitalism, love and sex in both German and English, it wasn’t long until Malaria went on a European tour which included a John Peel session for the BBC and recording a single ‘How do you like my new dog?” for a label in Belgium. Managed by Factory Records’ Mark Reeder, the release of Malaria’s first 12” self-titled EP saw the band support British visionaries such as New Order, Siouxsie and the Banshees and The Slits. Yet it was Malaria’s third release in 1982 entitled ‘New York Passage (Your Turn to Run)’ which accomplished international recognition outside of Germany’s electro-industrial scene. The EP entered the Top 10 independent charts in both the US and the UK, and catalysed an astonishing American tour, with performances at renowned venues such as The Mudd Club (read more about the antics at Mudd HERE) appearing with The Birthday Party, John Cale and a show with Nina Hagen at Studio 54.

Malaria’s first album, ‘Emotion’ was released to critical acclaim in 1982, with an accompanying music video for ‘Geld/Money’ winning prizes for its experimental editing. “We had the most intense time with Malaria! We were constantly touring!” remembered Gudrun Gut. Despite releasing three new titles in 1983, Malaria! took a hiatus in 1984; perhaps it was due their musical habits of disruption and tumult, or the frustration of not being taken seriously as musicians in an all-female group. As Bettina later said, being in an all-girl band was important because they couldn’t be heard amongst male members:

“Women have a different kind of rhythm, which you can hear very clearly in Gudrun’ drumming. She always got the compliment that she couldn’t keep time (laughs) but it was intentional, because we wanted to break the pattern that was ever pervasive in punk music…We wanted to explore the female aspect, free from preconceptions and established rules.”

The Berlin music scene was beginning to shift in 1984, as the music industry opened up in Germany, a new crop of bands latched onto the more artificial, stereotypical “eighties sound.” Bettina and Christine re-located to New York whilst Gudrun and Manon formed Matador with Mania-D member Beate Bartel. It wasn’t until after the Berlin Wall fell that Malaria! recouped, this time in the swamplands of New Orleans, to record the ‘Elation’ EP and later, an album ‘Cheerio’ in Berlin; Malaria! had come full-circle.

The legacy of Malaria, ever elusive and unorthodox, is evident in the sharp urgency of songs written almost forty years ago. Yet, perhaps the most significant legacy remains with the trajectories of Malaria’s individual members, particularly Gudrun Gut, who went on to create Monika Enterprise, a record label that featured only female artists. Citing that all the women who had made punk so interesting had disappeared by the 1990s, she sought to ensure that women were no longer swept under the carpet but were equal to their male counterparts. It is the same ethos which ensured that Malaria! was, and is, Germany’s most successful and distinguished alternative girl-band; as encapsulated by Mark Reeder: “They remain exclusively unique and their influence and legacy will reach far into the future.”