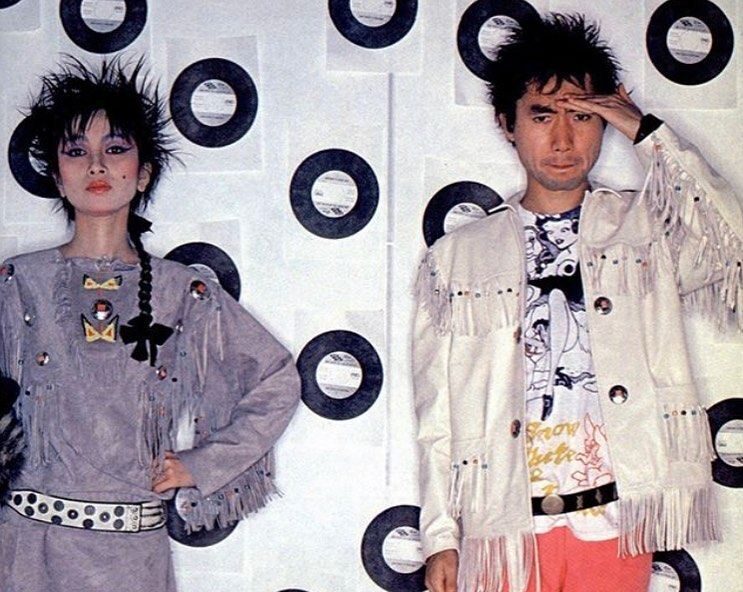 The latest instalment in our series investigating overlooked or obscured figures in musical and subcultural history explores Japanese New Wave band, Plastics. (The previous ‘Ever Heard of…’ about Zapple Records, an experimental label associated with The Beatles, can be read HERE).

A clip from a concert filmed in December 1980 shows the Plastics in all their glory. Towing the line between art and funk, this live rendition of ‘Diamond Head’ launches into a taut drum machine and scratchy guitar. Chica Sato, the only female member of the group, looking somewhere between a French maid and a regal punk – spiked hair tied with a bow, she is dripping in pearls; her bright pink lipstick offset by her crisp white apron – mimes playing the flute; “Wa Wa Ba Ba Ba” she drawls. A performance as enticing as it is bizarre, singer and frontman Toshio Nakanishi sings of “Modern Life” in contrived English before Sato once again takes to the fore; wide eyed and gloved hand on heart, she shriek-sings “Oh, shut up baby! Don’t be so serious!” This maxim – “Don’t be so serious!” – could well be a manifesto for the band themselves, a playfully irreverent Eastern approach to Western New Wave.

Indeed, it is the disparity between the East and West which sets the Plastics apart from their contemporaries, their lyrics citing Bauhaus and Russian avant-garde, technology and American consumerism through their remote, Japanese lens. Formed in 1976, Plastics were a musical union of Chica Sato and Toshio Nakanishi (who also had a romantic union) alongside Masahide Sakuma (keyboards), Hajime Tachibana (guitar) and Takemi Shima (rhythm box). Contextually, the 1970s was a tumultuous time for Japan. Emerging from isolated Nationalism with a post-World War II economic boom the country was in a state of flux, grappling between a tradition of community-based heritage and the rise of the individual, driven by consumerism and new technology. Here, Japanese baby boomers were fledgling into subculture-inspired youths, London punk and New York funk were migrating via osmosis across the globe. Plastics were no exception to this absorption of far-flung influences, mentioning Bowie, The Velvet Underground, Roxy Music and The Sex Pistols as their key inspirations. “Our guitarist Haijme was in the same carriage on the Trans-Siberian Express to London with Bowie in 1978” recounted Nakanishi, “Bowie and Iggy pop advised us “Do not imitate us. Write your own music.” Plastics’ first double AA single ‘Copy/Robot’ released by Rough Trade, is a faultless example of this culture clash, though reminiscent of Devo’s kitsch quirk, the guitar lines of both songs are redolent of Gagaku, a genre of ancient Japanese Court Music.

Musical legend dictates that in 1979 Nakanishi, who was also a skilled graphic designer, took the incentive to slip David Byrne a copy of the Plastics’ Demo Tape when designing tour programmes for Talking Heads. Byrne, noting a likeness to trash-pop group The B-52’s, passed on the Demo to the aforementioned band’s manager, who then went on to sign the Plastics, heralding an attempt to make it big Stateside. The new-wave, no-wave New York clans of The Talking Heads, Devo and The B-52’s were undoubtedly instrumental for the Plastics, and similarly, the Plastics zany, jittery songs influenced their New York peers. Perhaps this close, creative interplay is the reason why Plastics dwindled in Western music history, their half-English half-Japanese lyrics possibly alienating the ignorant audiences they sometimes faced. “If you go abroad, you cannot help but to rethink your identity”, Nakanishi later recalled, “I was in New York for a while, I was also based in London. But I am not American, nor am I British. When you enter the pop music world, you’re forced to describe yourself as simply as possible by the record companies. As a Japanese person, a very accessible orientalist is demanded of you…During the Plastics period, this kind of easy-to-digest Japanese Kabuki-style stereotype was required of us. But we never did it. We didn’t go around in everyday life in kimonos.”

It was this narrative of an identity crisis which, partially, led to the band’s swift unravelling. The Plastics’ three studio albums, released during 1979 to 1981, all revel in a glitchy, nervous excitement and sound remarkably modern forty years later. Yet their third, and final LP ‘Welcome Back Plastics’ was solely, and in hindsight, sacrilegiously, modified for US and UK consumption, re-recording earlier songs with the mass market in mind. The attempt to package Plastics for a Western dominion failed and in-fighting within the group (Nakanashi wished to develop as a serious musician whilst Sakuma wanted to stay a “party band”) led to their split towards the end of 1981.

Though a short-lived project, the music and individual members of the Plastics have had a subconscious effect on Underground culture, both musically and visually. Chica Sato, Toshio Nakanishi and Hajime Tachibana all had backgrounds in fashion and design equating for the group’s extraordinary appearance. After the demise of the band, Tachibana went on to become a successful designer whilst Sato worked as a stylist and model both before and after her stint in Plastics. British pop-artist Duggie Fields recalls the dazzling Sato on a visit to Japan in 1983: “The second act was a curious group of colourful girls fronted by the lovely Chica Sato. China indeed looked stunning, having moved on from her punk days, wearing a suit made entirely out of cork, as were all her accessories, memorably aping Chanel couture long before its contemporary revival.”

Chica Sato, and the Plastics, were invisibly instrumental within Japanese subculture, with electronic J-Pop of the 1990s taking direct incentive from their new-wave forebears. Sato and Nakanishi went on to form Melon, creating Japanese funk with members of Funkadelic and The Lounge Lizards. Nakanishi also co-owned Pithecanthropus Erectus, a significant venue in the early Tokyo Club Scene. The venue, which opened in 1982, was frequented by a range of cult figures including David Bowie, Bryan Ferry, Keith Haring and Basquiat, and was the site at which hip hop and reggae was brought to Japan.

Despite their many individual, hectic, creative endeavours, the Plastics reunited briefly in 1989 for some anniversary concerts, and again in 2010. This was to be the last time the group would reconnect; Masahide Sakura passed away in 2014 and Toshio Nakanishi, now considered one of the most well-known Japanese musicians of all time, died in 2016. Though neglected in favour of their American contemporaries, Plastics are a testament to how punk and glam rock can be distorted in a prism of day-glow mischief.