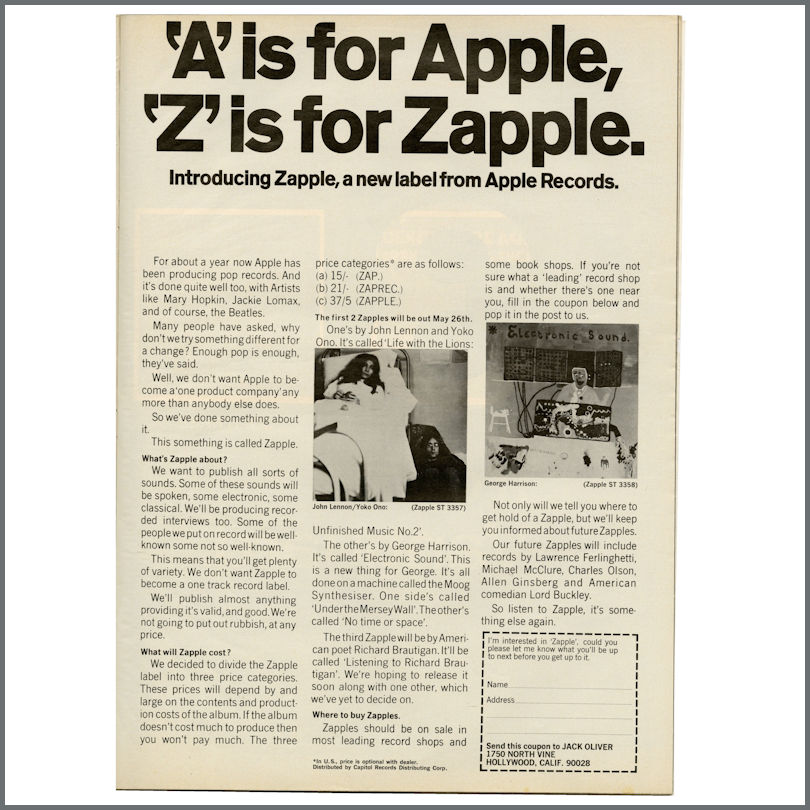 The next instalment in our series investigating overlooked or obscured figures in musical and subcultural history takes a look at Zapple Records, a short-lived label division which championed spoken word and experimental avant-garde sounds. (The previous edition of ‘Ever Heard of…’ about German post-punk, girl-group Malaria! can be read here)

Type ‘Zapple Records’ into a search engine and you’re instead directed towards Apple Records. Even the internet seems unsure about the credible existence of the counter-cultural label, a wayward sister of The Beatles’ own ambiguous experimentation in a multi-media corporation.

Part of Apple Corps, a business formulated by their manager, Brian Epstein, as a way to navigate tax, Apple Records was The Beatles’ proposed creative outlet for not only their music as a group but their individual ventures and other artists of the time. Named as such because ‘A is for Apple’ is the first thing a child is taught, the Apple label was conceived in 1967, yet the genesis behind Zapple Records predated Apple’s origin. It was in the summer 1965 when the concept of Zapple Records was first raised between Beatle Paul McCartney and Barry Miles – a figure immersed in London’s underground art scene, Miles was the co-owner of the Indica Gallery and went on to pen numerous books and biographies recording the time. At the time, Paul McCartney was a regular visitor to Barry Miles’ West-End flat, Miles would give McCarney hash brownies, avant-garde books and jazz records in exchange for little known Motown and Rhythm & Blues. Amidst this counter-cultural exchange, the pair came up with the idea of producing an audio equivalent to the avant-garde magazines circulating at the time. Their schemes of producing oral clips of rehearsals, articles and poetry culminated in needing a small studio which did not require the overheads of a commercial facility, both Brian Epstein’s new office building and Ringo Starr’s flat were potential locations, but the project was mooted and lay dormant.

The idea of Zapple (though at this point nameless) recurred following the establishment of Apple Corps. The Beatles were at the peak of their commercial and creative powers and sought to build their own “Underground Arts Council,” with the wish to cover publishing, film and music from their Utopian plans of a communal, creative estate. Around the same time, Barry Miles was starting a gallery space, Indica, in the basement of the Indica bookshop. Paul McCartney helped to establish the space – it was at Indica where McCartney hosted an exhibition of Yoko Ono’s work in November 1966, which led to Ono meeting John Lennon – and suggested that Apple Corps could aid Miles in re-invigorating their plan for an experimental label.

Barry Miles then drew up a list of American Beat and experimental poets to contact – spanning Allen Ginsberg, Henry Miller, Anais Nin, Richard Brautigan and more – with plans to compose a second list of non-US writers which would also be featured. McCartney and Miles schemed that the project would encompass radio plays, recorded conversations, Beatles interviews and lectures. As such, the project was green-lighted by all four Beatles, christened “Zapple” by Lennon and Barry Miles was instated as the label manager and swiftly scheduled his first recording trip for January 1969. Planning to hire a portable tape machine to aurally document his American visit, Miles’ first appointment was with the Texan poet Ken Weaver. As stated by Barry Miles on the illuminating BBC Radio 4 documentary, ‘Z is for Zapple’, the recording sessions with Weaver were incredibly DIY; hours of musings on mainstream American Culture and ‘Texas Crude’ were interrupted by the sound of children stripping a car outside.

Barry Miles’ journey around America proffered an array of recordings with some of America’s most legendary artistic minds. Allen Ginsberg (who, at the time, was arguably the most famous figure in counter-culture) suggested recording his mantras and a rendition of William Blake’s ‘Songs of Innocence’ whilst Charles Bukowski, who loathed poetry readings, simply had his house was wired up and, left to his own devices, ended up producing 12 reels of tape. The snippets of Zapple’s spoken recordings included in the Radio 4 documentary are rather arbitrary and rambling. Herein lies the blessing and curse behind Zapple, a venture so abstract, wandering and non-commercial that its own plight risked alienation and self-indulgence. As noted by Apple’s ‘house hippie’ Richard DiLello, Zapple was the ‘alt-apple’: “It was always below the radar, they’d talk about it and it’d disappear…It was a concept way beyond it’s time and you can’t be too far ahead of your time; then you leave everyone behind scratching their heads.”

Back in London, Zapple was attempting to gain publicity with its first release, ‘Life with the Lions’ by Yoko Ono and John Lennon. Realising that “someone else as balmy as me could equally enjoy non-dance and non-pop music” Lennon took inspiration from the Fluxus Art Movement.

Opening with an improvised piece ‘Cambridge 1969’ was recorded in front of a live audience – this was Lennon and Ono’s first released performance, and, furthermore, the first performance by a Beatle without the rest of the band. The piece consisted of Ono howling and crying against looping guitar feedback, there was no rhythm or familiarity, and the discordance proved to be a hard listen for Beatles fans and the music press, with Rolling Stone Magazine declaring the album to be “utter bullshit.” 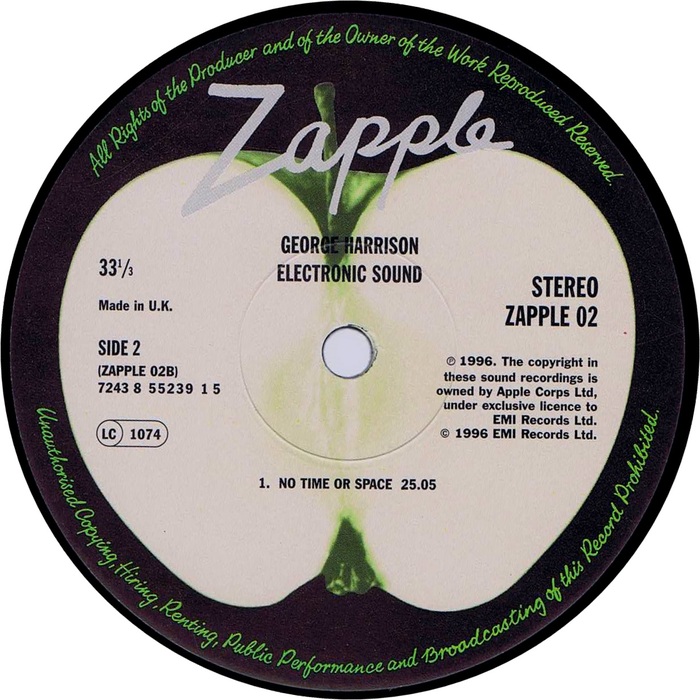 Released on the same date as ‘Life with the Lions’ – May 26th 1969 – was George Harrison’s LP ‘Electronic Sound.’ According to Barry Miles, this album saw George Harrison “trying to master new electronic toys” – the entire record, comprised of two long tracks, was performed on a Moog synthesiser, an instrument which, according to Harrison came with no instruction manual, and his falling out with Bernie Krause (his Moog representative) meant that he had little guidance on how to use the complex synthesiser. Later, Harrison was to dismiss both Zapple albums, ‘Electronic Sound’ and ‘Life with Lions’, as more ‘Avant Garde Clue!’ than avant-garde.

By this point, Allen Klein had been assigned as the business manager of Apple Corps – though this role appointment was rather turbulent; Lennon was in favour of Klein’s rigorous management whilst McCartney strongly opposed his presence. Both the Beatles, and Apple Corps were becoming hostile and fractured. Barry Miles, assured that all four Beatles were still onboard with the Zapple project, continued to travel the States collecting audio material, yet two weeks into recording an album with Allen Ginsberg, Miles received a telegram that the label was to cease due to Klein’s new financial regime.

Scarcely before it has begun, Zapple was over: Paul McCartney, who had been so significant in Zapple’s construction had never released anything on the label, and the third Zapple album promised in the label’s introductory advertisements – from American writer Richard Brautigan – never came to fruition. Apple, and Zapple by extension, symbolised the experimentation, extravagance and, sometimes, aimlessness of the 1960s. As the decade, and The Beatles, drew to a close, the utopian visions of the group and their contemporaries cracked. As a venture, Zapple’s emphasis on sound rather than music, and its belief that records could be sold at the cheap and democratising cost of a paperback, was innocent but impractical. Barry Miles believed, retrospectively, that the label could have had a major role in the arts had it had time, though this is somewhat questionable, the pioneering spirit of Zapple and its radical releases, were doubtlessly visionary.