Experiments in Sisterhood: The audio-visual universe of WATERBABY 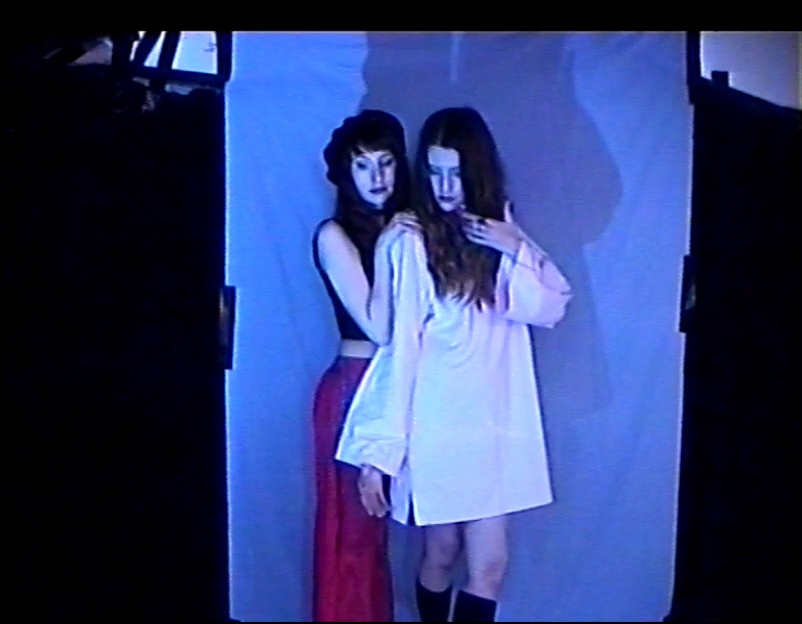 The Kilpatrick sisters are as enchantingly ethereal as their namesake sprite suggests, yet an ethos of hard graft lies beneath their imagery of rippling projections and flowing locks. Ever resourceful and ever inventive, the duo behind Waterbaby have been experimenting with electronic music and Fassbinder-inspired film since their 2016 self-released debut album ‘Pink Noise.’ From curating an audio-visual night to directing music videos for the likes of Deep Tan and Martha Skye Murphy, we caught up with Waterbaby about their various guises (including appearing as holograms) and their new music: “the hard drive is about to burst.”

You’ve recently provided eerie vocals for Tomas Nordmark’s new track ‘Ghosts’, how did this collaboration come into being?

We asked Tomas Nordmark to play at our audio-visual night after we heard his first album and we’ve kept in touch since – we’re all really influenced by the writer Mark Fisher and also share a love for film scores. Tomas sent us the track ‘Ghosts’ and some translated text from the opening chapter of Swedish novelist Mare Kandre’s neo-gothic novel Bestiarium during lockdown. We whispered and sung requiem-style harmonies over the electronic soundscape, which was actually a deconstructed Wagner’s “Tristan chord” slowly falling apart. He released it as his second single for his new album Exit Ghosts, which is coming out in May on the avant-jazz label Valley of Search. It’s such a beautiful record and we were so happy with how surreal the track ended up sounding. We had just watched the film ‘Last Night in Marienbad’ when we sang the vocals and wanted to recreate the uncanny and dreamlike feeling we had when we watched it.

How has the past year of locked-down living affected your creative practice?

Well, we have actually been in ‘album recording mode’ through the pandemic, which is quite a reclusive state of mind for us anyway – so it hasn’t been all that bad. We moved our studio into our flat and have just been recording every day, which is a pretty normal state of mind for us! Apart from that we had lots of gigs cancelled like everyone so we did a live-stream from our kitchen – which was actually quite intimidating as obviously there was no sound engineer to mix everything – so we had to learn how to mix sound live whilst performing it ourselves. We blacked out the flat and made video projections that synchronised with the music.

The hologram performance in Sweat’s VR club was so fun, it felt like a hackers convention – though weirdly you get just as jittery and nervous before like a real gig, even though it was pre-recorded and pre-edited.

There was something uncanny about performing as a hologram, almost like mourning the semblance of normal life and human connection. But it also felt exciting to be experiencing live music in such a new and different way. We have actually been working with Sweat on directing a music video for their single The Big Scene, which we feature on and it’s going to come out in May. We were planning to film it together in our shared studio warehouse in Peckham, but then the pandemic hit so we ended up directing it over Zoom, which was quite funny! Everyone had their separate green screens in their rooms playing their characters and a lot of it was filmed on iPhones!

The idea behind the video is connected to our online identities as being like ‘doubles’, the ‘real’ you vs the ‘fake curated’ you – it’s all imaginary, something beautiful – but fake and digital. Sweat have also built a 3D VR cinema for the launch of the video! Return of the hologram!

Would you say that working together as sisters has given your creative work an innate intimacy or is the familial aspect challenging?

Being sisters just means we have no inhibitions when creating, no idea is too ambitious to suggest, we try everything without fear, the more out there the idea sounds, the more a sister is intrigued!

We have written songs together since we were little, and it is like we have created a secret language – there is an innate understanding with ideas and concepts, like two halves of the same brain. We live together and share a studio together so spend all our time together, sometimes we don’t even need to speak like an idea has been shared by telepathy. The end goal of our life comes down to art and nothing else really. So, we think the same, for example sometimes when we are writing we will come up with the same lyric at the same time. Especially with lyrics, one of us might say the first line and then the other one might finish off the line. But we never disagree creatively – we have a hive mind when it comes to our imagination and art.

Our mood is entirely dictated by how our work is going. When you crack a problem in the song and it opens a door it’s like the clouds part and the heaviness is lifted. It feels special to share something together like that. The album is a lifecycle, birth to death and you live with it.

Electronic music can be quite a solitary practice yet you’ve done lots of collaborative projects, how do these two opposing dispositions feed into your music?

That solitary nature of electronic music is perfect for us as we have quite an unusual way of working that maybe other people wouldn’t be able to understand. We knew early on we wanted to produce our own stuff, we wanted to be the sole conductors of our electronic orchestra. We felt that as women it was really important no-one else was involved except us, and that our ideas were not diluted so we worked on learning how to produce for hours a day until we got to stage where no-one could say to us, we needed outside help.

On the other hand, collaborating with other artists by featuring on their tracks and directing their music videos is fascinating to see how they work and have an insight into their unique skills and techniques when they are so different from yours.

Your videos all seem to have a commonality – quavering projections and a similar colour palette of blue and red – is this overarching concept intentional? What do you want viewers to feel when experiencing your audio-visual work?

We made a lot of these videos in mind with projecting them on a stage, and we realised it worked better to simplify the colours and images in order to make them more visually striking when we are performing. Although we have quite a distinctive style, a lot of our video work comes out of working with what we have – which isn’t much. Making something bold with no budget, but not letting this limit your imagination in any way, is probably the main message that we want to give off. We want the Waterbaby project to be a whole universe that you immerse yourselves in.

We love the mix between DIY punk aesthetics and something otherworldly and striking. Beauty mixed with the mundane trash of real life. When we make music the world dissolves or makes sense, it’s like finding control in the chaos. 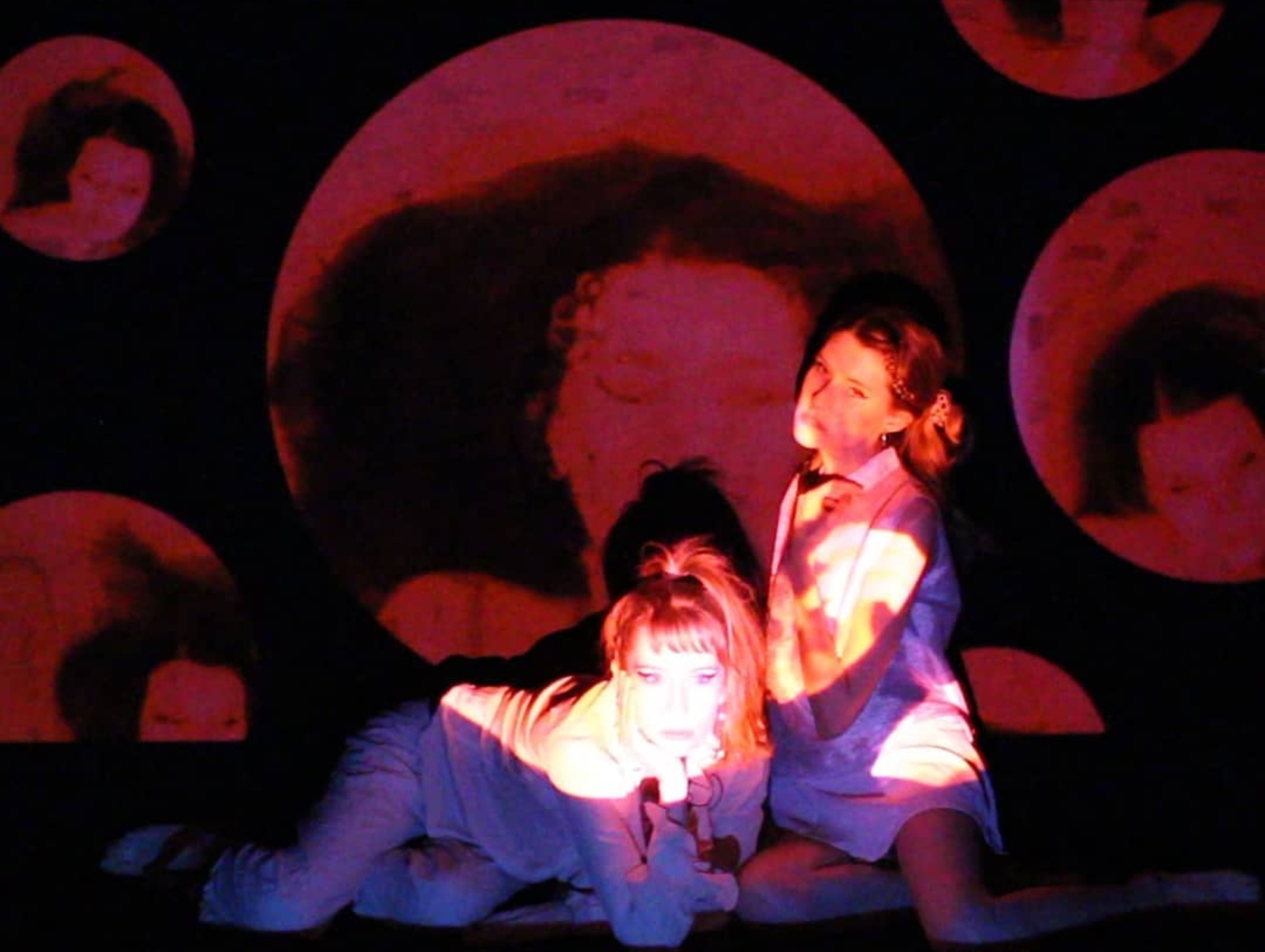 You’ve also directed music videos for the likes of Deep Tan and Martha Skye Murphy – how did you expand the Waterbaby universe to suit other musicians?

Both Deep Tan and Martha Skye Murphy are also good friends of ours, we really love them so it was an obvious joy to work with them – and they all look so iconic on camera!

These two videos were made quite differently as Deep Tan just let us do something in our style, we had been talking about our mutual love for Kenneth Anger at the time so we made the video with all these sorts of layered images, and the result was this weird glitching mirage of pink. There was a very spontaneous element to this video, which is kind of how we work with our own stuff. With Martha’s video, she already had the concept and storyboard laid out – and she had a few other people involved too, Mary Mathieson was building a set, and Morgan Ursula Veazey was in charge of costume. This was the first time we had worked with a ‘team’ – so it was fun working out all the details together, like how we were going to create the fake illusion of a two-way mirror with the set and video editing without actually having one etc. With directing videos, it is important to bring your own unique perception but also listen to the artist and marry it with their vision too.

Can we expect a return of your audio-visual night ‘Leopard’ now restrictions are easing?

Yes! We had one booked for Rye Wax with these two amazing artists Julia-Sophie and A’Bear, which was cancelled as it was the week the first lockdown hit, so as soon as things start opening up again, we will reschedule this show as we can’t wait to play with these two artists! We wanted to make Leopard a regular thing, and we also had plans to do a music video screening night.

Find out more about Waterbaby HERE