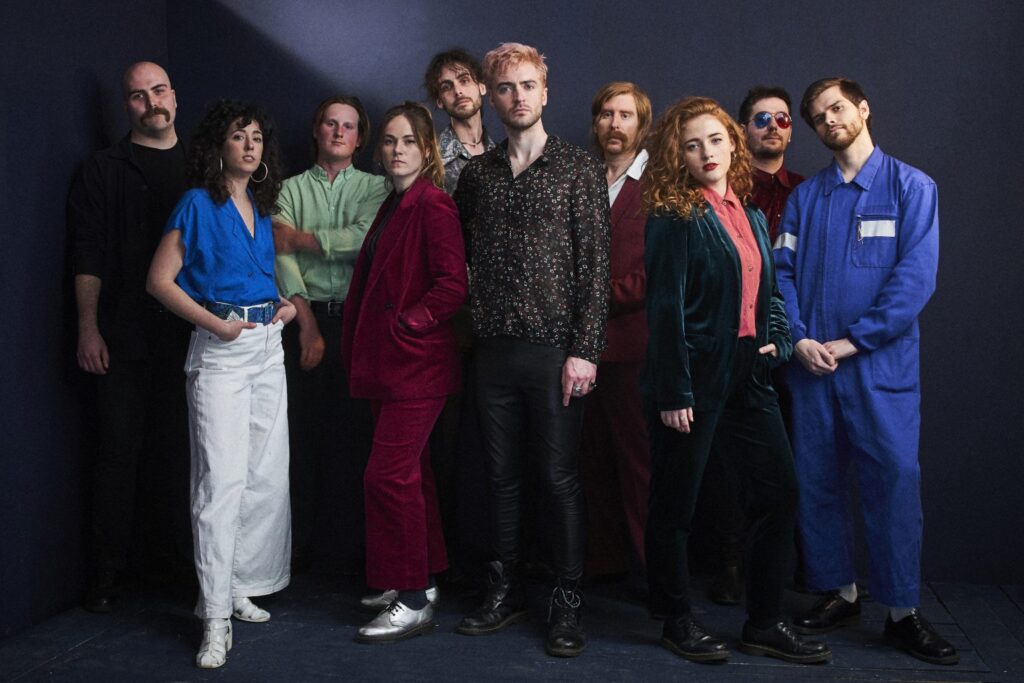 Fake Turins are no mere band with a formulaic set-up. Spanning at least twelve members, this tribe of “Nomadic Disco Psychedelia” is better chronicled as a colossal, creative community. Their audio-visual romps of distortion (see lockdown project ‘Fake TV’) have set the group on a course of high-concept aesthetics and ambitions for exhibition spaces, whilst their upcoming EP ‘Time Flowers Now’ is testament to how a dozen aptitudes can collide in a hallucinatory, musical kaleidoscope. New single ‘Talking Prophets’ is Fake Turins’ choppiest venture yet; we caught up with frontman and writer Dominic Rose about the familial genesis of their darkest release to date.

You’re a twelve-piece musical collective; how do you go about crafting songs which encompass all those opinions and contributions?

Dominic Rose: I’ve always written the material, I think when you’re in a smaller group it’s easier to fragment the credit, when there’s lots of people there needs to be a centre-focus like a conductor in an orchestra. I always take it back to David Byrne saying that “if you’re going to do something you need to make a point”; you need the character up-front leading it. The rest of the team bring their creative ideas too, we workshop ideas until we come up with a final focus.

You recorded the EP in 2020, has it been odd sitting on it for such a length of time? Retrospectively, have the songs taken on a different meaning or symbolism for you?

Completely, to have ‘Down’ and the EP come out feels like a form of catharsis. It’s taken on a life of its own, we’re playing it differently; the songs have grown inside of themselves. When we did a show with Opus Kink, having people know ‘Down’ and singing it back was quite phenomenal, it made me play the song differently with a bit of a wink and a nudge. I keep thinking that my overly-verbose, full-of-themselves lyrics can get lost but the delivery is quite catchy and so people are singing the verses, that’s the thing that amuses me the most!

Your first single from the upcoming EP, ’Down’, was released last month. Despite its incredibly jubilant instrumentation, it has some very stark lyrics about depression.

The subject matter came first, it is always at the forefront of whatever I write about; that grappling with mental health. It’s always the personal issues that we try to extol in a larger message. It was written at quite a bleak period and I realised the music needed to be a massive party as a way for people to even be able to listen to it! I love sad music but it can get quite wrapped up in itself and you can lose your tether to what you’re trying to do. If you can celebrate even the sadness in life, it can make it all a bit easier.

The best time we played ‘Down’ live was at the end of 2019 and it was a show at 3am and we just decided to elongate the song until everyone in the room was shouting along…we played it for about 20 minutes!

On to your new single ‘Talking Prophets,’ what’s the story behind the song?

It is more about my Dad than anything else, I’m sure we all have tempestuous relationships with our parents in one form or another. After my Dad passed away, I started writing about his blind wilfulness and my discomfort yet strange admiration for this trait. It represented the ignorance and communication styles of this post-modern age of Brexit and Trump; something has fundamentally shifted in the optics of our lives. The song tells the story of this soothsayer who has no vision; someone who is trying to see the future but can’t see what is in front of them.

You’ve said it’s your darkest release so far – would you say that you are heading towards a darker place as a group?

Instrumentally it is the darkest! We’ve always been described as a “disco-punk” group but this is definitely the punk side of it, this song is all noise and wailing guitars. I would be wrong-headed if I just dived into fully composing into music just like that!

The EP is interjected with these small instrumental parts called ‘roses’ which provide a state of repose amongst the songs. Could you elaborate on these fragments and the general shape of the record?

Those came from an entirely separate EP. There are so many of us in the band that we’ve broken off into different sections with different names – one of them is ‘Cosmic Turins’ who’re the guys who make very strange noises! I put them in a room together and hit record and they made two hours of music, I edited it down to 20 minutes of an ambient, drone record … in another life we’d just be a drone band! We decided to look at those instrumentations and see how it could build some atmosphere. There’s an immediacy of songs which is start/stop and having that thread, that ebb and flow, meant we could have a dynamic shift between songs.

All of the songs lead into the final and title track, leading it to this moment of peace and quiet and the message of the record finally comes to the forefront.

Despite some bleak lyrical themes, the EP concludes with a sanguine, spoken-word manifesto of sorts with the title-track ‘Time Flowers Now.’ Do you think there is time for a blooming, a blossoming despite all the setbacks independent music has faced in the past few years?

You have to wade through it, but there is space for a blossoming. This fallow period has meant a resurgence of creative ideas and smaller, new communities – take Hideous Mink Records as an example. But there needs to be a re-think, a re-consideration, of how people move forward and how we communicate and interlock with our communities. The one trait of human instinct is to break through the challenges imposed on us, that you can find a way to move forward. The arts are always about communing and pushing against barriers.