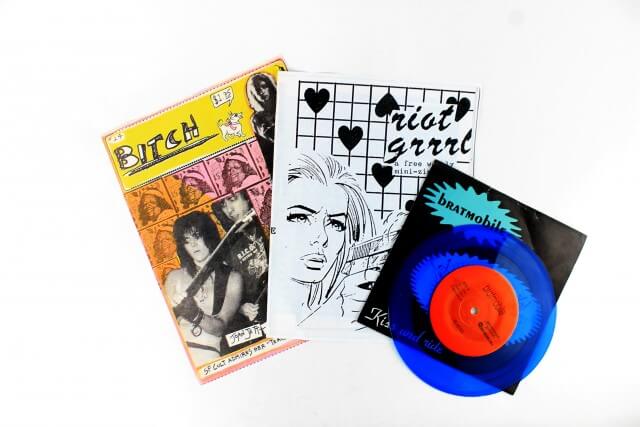 Riot Grrrl emerged in the 1990’s as an international underground feminist movement with women creating bands to challenge the dominance of men in the alternative music scene and blow away the stereotypes built up around the punk movement confronting sexism head on.

The term itself seems to have been first used by Jen Smith from Bratmobile with the triple RRR being used to take bake the derogatory use of the word Girl. The founders of the movement were alternative and always in punk and new wave bands. The Riot Grrrl movement encouraged engagement in DIY cultural production, creating their own fanzines and music rather than following existing patterns. The zine set up by Molly Neuman and Alison Wolfe and was simply named Riot Grrrl. It was in some ways a bridge or bridgehead to the digital age and opened the way for teams of online fanzines and meeting rooms and chat sizes dedicated to the scene.

Slogans used in the Riot Grrrl zines started being appropriated by 90s pop sensations such as the Spice Girls thus reaching a new demographic and generations of girls listening to a different genre of music. Like so many subcultures, this commercialization was seen by many to devalue the message. But in a way it was to a certain extent a case of job done as the message, even in a diluted form started to get through and Girls and Grrrls could start to redress the imbalance.

In terms of the music Riot Grrrl’s lyrics covered a variety of subjects from rape, incest and eating disorders which women all around the world could relate to. The two foremost bands in the movement were Bikini Kill and Bratmobile and for good measure we also feature Skinned Teen from the UK.

Bikini Kill was an American punk rock band formed in Olympia, Washington, in October 1990 consisting of singer and songwriter Kathleen Hanna, guitarist Billy Karren, bassist Kathi Wilcox, and drummer Tobi Vail. The band was and still is widely considered to be the pioneer of the riot grrrl movement, known for its radical feminist lyrics and fiery performances. Their music is characteristically abrasive and hardcore influenced. The group began working together on a fanzine called Bikini Kill, and with the addition of former Go Team guitarist Billy Karren, formed a band of the same name. The band wrote songs together and encouraged a female-centric environment at their shows, urging women to come to the front of the stage while handing out lyric sheets to them. Hanna would also dive into the crowd to personally remove male hecklers. The band’s reach included large male audiences as well as young women.


After two full-length albums, several EPs and two compilations, they disbanded in 1997.

Skinned teen was a much smaller known band to of been a part of the Riot Grrrl movement it was formed by British teenagers from London, Layla Gibson, Flossy White and Esme Young in 1992. They were offered their first gig after approaching band member Kathleen Hanna after attending a Bikini Kill concert. They approached Kathleen after a 1993 UK tour and that led to their first gig. This opportunity led to the British band releasing a handful of recordings starting off with their debut Karate Hairdresser EP in later 1993. Following closely behind in 1994 with the release of their debut album Bazooka Smooth which show cased a more experimental range of music styles. Even with their short lived success Skinned Teeth can be seen to this day to be the first pure UK riot grrrl band. Former British riot grrrl bands before had associations with previous musical genres such as indie which gave Skinned Teeth the edge. Although the lifespan of the band was short they held the crown as the original UK Riot Grrrl act and remain an inspiration to current musicians and fans in love with this genre.

Thurston Moore of Sonic Youth chose a Skinned Teen song for the compilation album Rough Trade 30 in 2006, which was later used on the soundtrack of a Skins episode in 2009.

Bratmobile was formed in Eugene, Oregon USA by two female students attending the University of Oregon. Students Allison Wolfe and Molly Neuman passionate riot grrrl admirers collaborated one day on an influential feminist fanzine ‘Girl Germs’ and Bratmobile was born. Wolfe firstly described the band to be “fake” due to them not playing instruments but using a cappella when performing their written songs. With help from the established riot grrrl band Some Velvet Sidewalk, Bratmobile got instruments and studio space to practice in so they could later go on and perform their five original songs at their first show on 14<sup>th</sup> February 1991 as a two women act with Neuman and Wolfe sharing duties on guitar, drums and vocals. This two-woman band later on became three with the arrival of Erin Smith a nascent guitarist leading to a huge success. From Bratmobile’s first shows they were considered a very important, influential and fun new riot grrrl band to hit the northwest 90s scene. After three years of producing a number of popular music the band disbanded in 1994.

They reformed briefly in 1999 and then finally called a day on Bratmobile in 2002.