Folk Devils and Moral Panics: The Creation of the Mods and Rockers by Stanley Cohen 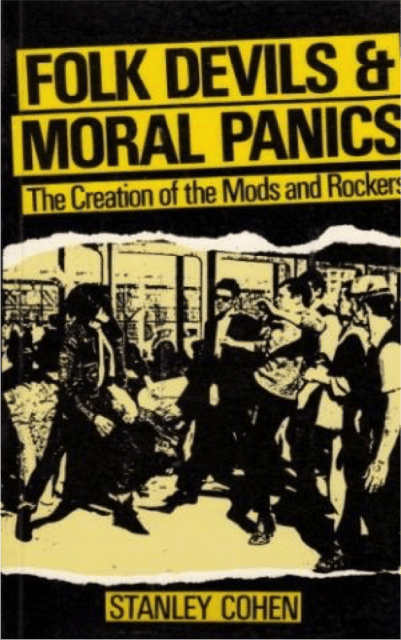 Ahead of the bank holiday we are taking a look at ‘Folk Devils and Moral Panics: The Creation of the Mods and Rockers’, written by Stanley Cohen and it is a piece of work highly respected by British criminologists. The book looks at the social and media reaction to the conflict between the Mods and Rockers in the 60’s. He wasn’t focused on what caused people to react, he was more interested in their actual reactions. This was something that, at the time, criminology wasn’t really looking at or discussing.

Stanley Cohen a sociologist and criminologist from Johannesburg, South Africa was a Professor of Sociology at the London School of Economics who passed away in 2013. He first came to London in 1963, just before the Mods and Rockers youth riots were taking place around England. In an interview with Vice, Cohen said, “I was working on my PHD in 64-65, when the original mods and rockers confrontations were happening at the seaside. I used to go down to Margate and places like that over bank holiday weekends, conduct interviews and fieldwork.”

Mods and Rockers were two British youth subcultures in the mid 60’s and 70’s who just didn’t get on with each other. Rockers were old school with motorbikes and café racing, 1950’s rock and roll and leather jackets. Mods were the new kids on the block, snappy dressers, riding scooters and experimenting with amphetamines. Get them both together on bank holiday weekend on the beaches of southern England, stand back and watch it kick off. The constant goings on led them to being branded as ‘folk devils’. Cohen became interested in the conflict between these two groups, but more interested in the way that society and the media was reacting to them.

In the book, he explains that if someone is acting in a way that is not typical to what society is used to, then the media tends to extremely overreact about it. He talks about how ironic this is, as the more the media cover this new behaviour (in this case, the mods and rockers fighting), the more it becomes established. So rather than stopping it, which they were trying to do, they’ve actually helped it to grow. This constant media coverage puts this behaviour into a box, making it easier for people to understand it. The media tends to give names to things and explain them, which then gives people an example that they can follow. So now they have an exact formula to copy from, whereas before they didn’t even know what to call it. In the end, instead of getting rid of it completely, the media helped to grow.

Cohen explains that this fear that society and the media have is called ‘moral panic’. And the term ‘folk devils’ is the term for the groups that are causing this fear. Cohen is said to have coined the term ‘moral panic’, although this phrase can be traced back as far as 1830. He gives a more detailed definition of moral panic, saying that “moral panics are expressions of disapproval, condemnation, or criticism, that arise every now and then to phenomenon, which could be defined as deviant.” In the rest of the book, he goes on to explain how crime is not a simple black and white concept where there are specific rules. But instead, social reaction determines the direction that crime follows.

Overall, Cohen suggests that mods and rockers were actually created by the media’s reaction to them. Which means that society’s concern with subcultures only helps them become bigger and more iconic.