Forrest Flowers on punk energy, being transparent and stripping shirts off on stage 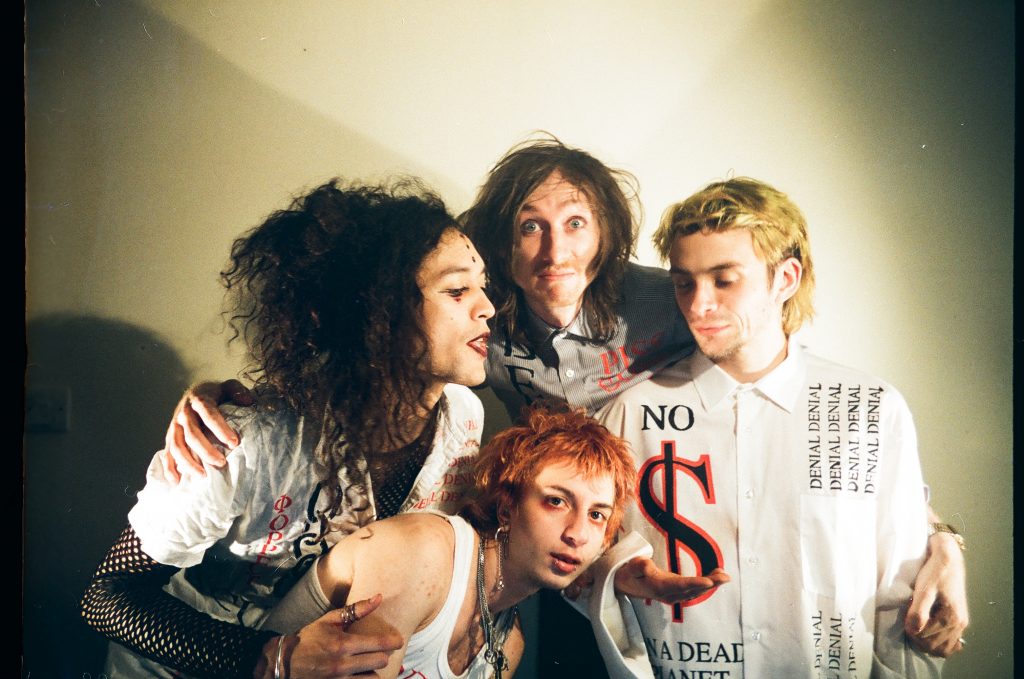 Hoping to fight systematic issues such as bigotry and classism, Forrest Flowers are a community-driven band consisting of vocalist Noel Oganyan, guitarist Sunny Robertson, bassist Tom Issac and drummer Zee Ahmed. When the four-piece is on stage, they’re out for blood and a force to be reckoned with. It doesn’t matter whether they’re performing at a rehearsal studio with a capacity of 50 people or a fully packed live music venue; their creative energy will always find a way to permeate the room.

We recently chatted with the quirky and fun-loving frontman Noel Oganyan about the origin of the band, dealing with hateful comments online, being honest with their songwriting and their love for stripping on stage. They are a fascinating blend of punk noise and vulnerable introspection, and they are destinated for bigger stages.

An interview with Forrest Flowers

How did everyone in Forrest Flowers come together?

Our start was as chaotic as everything that followed, if not more! Last year I got a slot to perform at a club night and had two weeks to prepare for it. The idea of doing live music came to me, so I hit up my mate Sunny who was playing guitar in his own indie post-Demarco band at the time. Our first drummer Zee was another friend of mine. He had not played drums at all then but realised the emergency of the situation. After the guitar and drums had been sorted – not really (laughs) – I wrote the songs for our first EP still having found no one to play bass.

I turned to the place where all desperate musicians go to in search of each other (and love) – Tinder. A miracle happened. Tom has replied to the ad within a day, somehow having believed in our hectic setup. After three days of continuous rehearsals, we played our first gig and decided we wanted to do this many times more.

Did you purposely name it with two r’s so it’s more google-able?

Forrest Flowers used to be my alter ego name. “Forrest” being the first name and “Flowers” as a surname. Forrest Flowers is a persona, as well as a replica of me. But we do get a lot of mix ups. Our band email keeps receiving quote requests for wedding bouquets and funeral flowers setups. I think if you google us, the Google’s musician box shows our picture alongside couple of stock images flower fields. Not too mad. 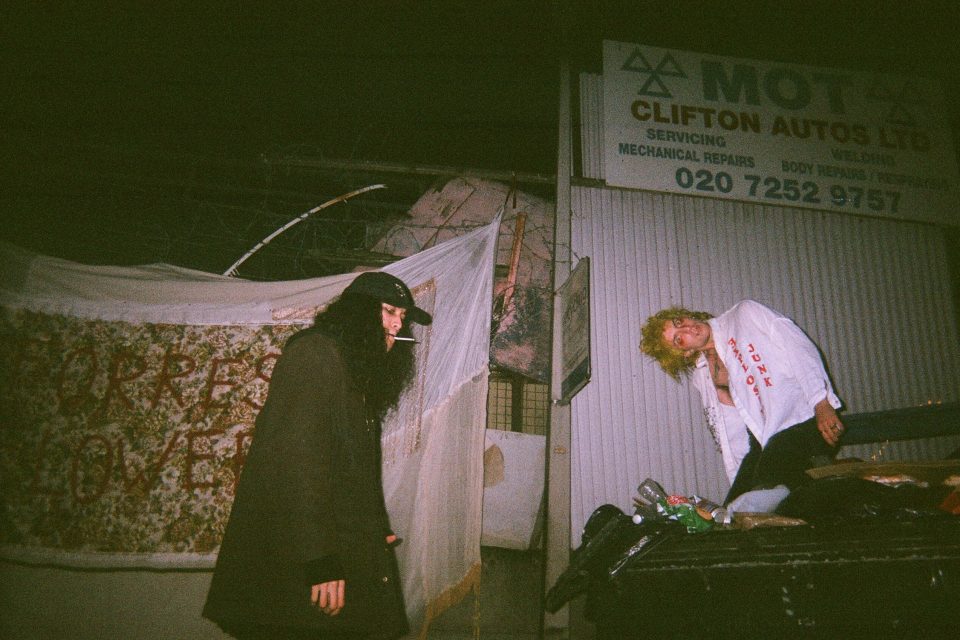 You’re a feisty one on stage. What kind of energy do you seek to generate?

I feed off the crowd’s energy a lot! The idea that people have come here to this venue, spent their time, money and effort, and possibly brought their friends all for seeing my thirty-minute performance – it’s still a mind-blowing concept to me. That’s why I always make sure to give all that I have to the audience. I want people to really feel it. And I want people to leave thinking they’ve seen something new and exciting. The worst thing for me would be to see someone be bored by a show. I’m definitely not here to waste anyone’s time.

Is stripping on stage your favourite part of the performance?

It’s definitely a classic! It wouldn’t be a Forrest Flowers show without some amount of stripping. Funny enough, at our first few shows people assumed it was a planned stripping when really, I just got too hot on stage. Eventually, we got a tune together called ‘Noel the Stripper’. Now it’s official and by public demand it became a tradition, too. 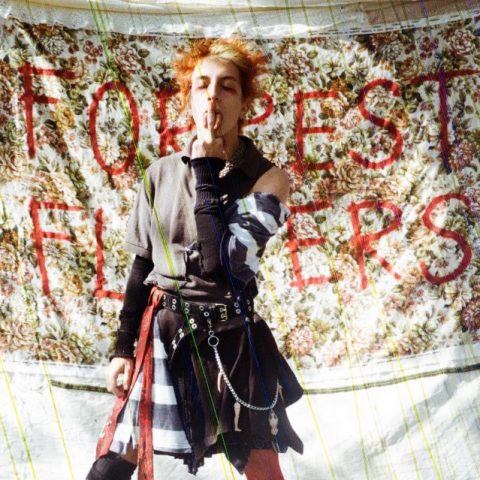 What kind of subject matter has impacted you the most in the lead-up to the formation of Forrest Flowers?

It would be hard to name one. I think my whole life has been the context for this band. It feels like an accumulation of all my life experiences: from growing up in an estate in Russia to undergoing gender reassignment to migrating to the UK and now establishing a queer punk band. We are certainly motivated by a lot of political and social issues. However, we also want people to feel better about themselves and unite in love and positivity rather than aggression and violence.

How do you feel about being transparent and putting these insecure parts of yourself out into the world? I recall you saying one of the songs was inspired by the nasty things people said about you on the internet.

Yes, the lyrics of ‘Cockney Cunt’ are exclusively written based of the hate messages I got on social media. I remember feeling a bit discouraged that people would go out of their way to express their hatred of me. When we were jamming at a band practice, I just started singing these messages out. We all laughed at how ridiculous they were (the worst ones didn’t even make it into the song out of our concern for people’s mental safety). It was a joke and still is. I’ve never felt upset about it again. And talking about it and laughing with others is what makes it so easy to get over with. 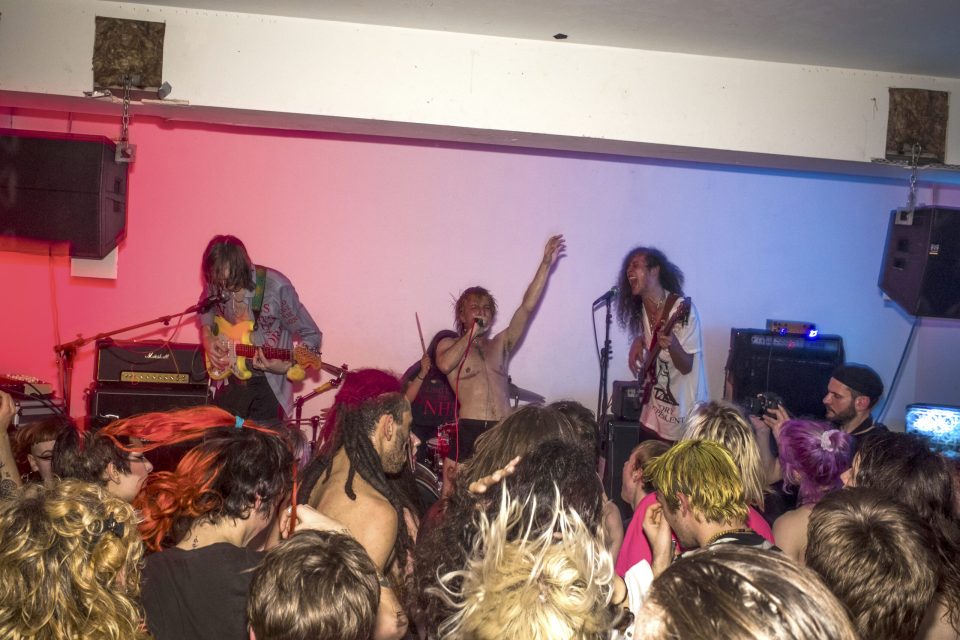 How are things progressing for your upcoming releases?

We’ve just released our new single ‘Chickens’ which we are all very proud of. It’s a little mad, a little psychedelic, a little witchy and a little too loud – it’s everything we like. Currently, we’re working on developing an acoustic set as we’ve been asked to support our friend and a legendary singer-songwriter Maria McKee at her show at Earth Hackney. We’ll be performing a fully unplugged Forrest Flowers show there on 31st March. It’ll be beautiful – we’ll try to be beautiful too.

Which Forrest Flowers song do you feel the deepest connection to and why?

I think ‘Chickens’ has been my favourite so far. The lyrics are extremely personal to me. There are specific people and situations that it is written about and I hope everyone else can find some insights that they can resonate with as well.

What’s the most inspiring advice that you’ve been given in recent years that you’d like to share with us?

Once at an art foundation course, I was really worried about the tutor not liking my project. I told my course mate about it to which she said, “Your duty as an artist is to create your work and put it out into the world. What others think about it – is not your problem.”