FOUR DECADES – OUR DAY OUT FILM 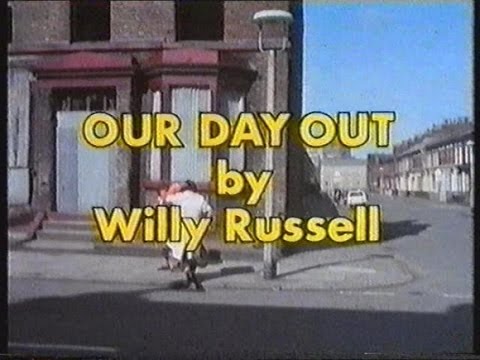 It has almost been four decades since television play Our Day Out was shown on BBC2. Written by Willy Russell best known for works including Educating Rita and Blood Brothers, Our Day Out is a timeless classic about young Liverpudlian’s on a school trip to Conwy Castle, Wales.

Broadcast in December 1976 the film focuses on a class of disadvantaged school kids on their first school trip. A portrayal of growing up as deprived children from the backstreets of Liverpool, the actors played fourteen-year-olds eager to get out of class and explore.

The combination between light-hearted humour and the focus on what was an economically deprived Liverpool makes for a classic British film. With mischievous kids pocketing snacks under the nose of the shopkeeper and their teachers when their coach stops at a roadside cafe, it gets worse when the children arrive at the zoo and attempt to make off with the animals. When reaching the castle situations aren’t so carefree as a young schoolgirl threatening to jump off a cliff comes face to face with her teacher who so far had acted as a stern individual.

Broadcast six weeks after its initial premiere and praised for its beloved British humour, the film was re-broadcast again two years later. Shot in Wales, first time director Pedr James worked with a largely untrained cast and shot the film within three weeks. Writer, Willy says ‘I still watch it today. The performances are exquisite.’

At forty years old the film obviously shows its age but the spirit and message still resonate. A Youth from a deprived background with no real opportunity and yet with an innate spirit of adventure. Interestingly the films release is right on the cusp of the emergence of the “scally “ look, the origin of the “Casual “ subculture. Look carefully as there are just a few hints of that coming through.