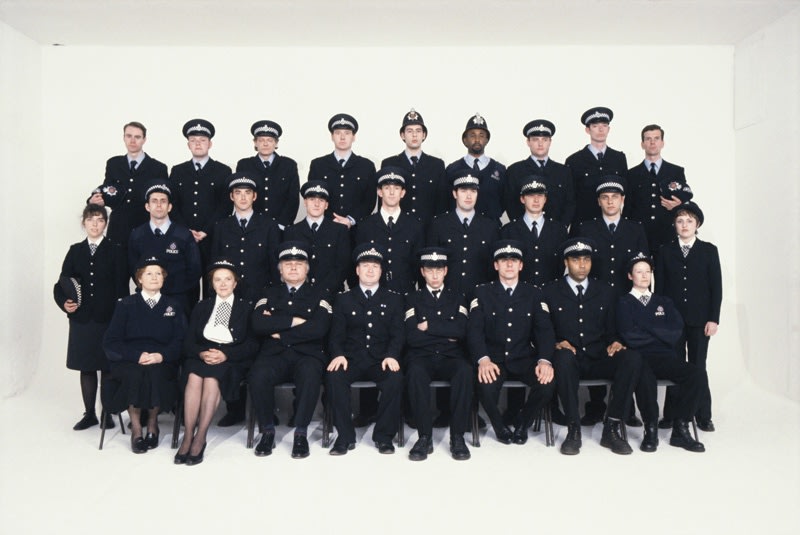 Thumbing through our library here at Underground, the cover of this book always makes me pause.

It’s been twenty years since conceptual artist Gillian Wearing’s ‘Sixty Minute Silence’ video installation (above) was exhibited exploring the concepts of control and surveillance. Twenty-six police officers in what initially appears to be a life-size photograph turns out to be dressed-up actors undergoing a physical endurance test in a real-time moving image. The deceitful piece can be understood as a filmic interrogation – an exploration of self-preservation, restraint and control.

After numerous exhibitions focusing on human behaviour and the concept of impulse, Wearings’ controversial yet intriguing pieces of work are well recognised works of art. Often collaborating with members of the public, Wearing has described her working method as ‘editing life’.

Wearing was born in Birmingham in 1963 and graduated from Goldsmiths with a degree in Fine Art. Shortly after graduating Wearing produced a series of photographs portraying individuals in Signs That Say What You Want Them to Say and Not Signs That Say What Someone Else Wants You to Say (1993). The results were thought-provoking with memorable photographs of a policeman holding a sign saying ‘HELP’ and a businessman proclaiming, ‘I’m desperate’. Her ideas stem from fly-on-the-wall Documentaries and reality TV, looking into personal identity and blurred boundaries.

She continues to focus on similar phenomena of human spectacle including how individuals distinguish themselves within a large crowd, for example, her Dancing in Peckham (1993) which sees Wearing dancing in the middle of a shopping mall for twenty-five minutes. Or Drunk (1999) where we see a twenty-three-minute video of a group of alcoholics over a period of two years. Wearing focuses on the subjects individually and within a crowd allowing the audience to study their drunken state as they fight, quarrel and sleep.

Her strange but engaging projects have gained attention from all over the world for their controversy and human interest. Awarded an OBE in 2011 for her services to art, Wearings projects continue to inspire and engage audiences.