HALLOWEEN: The origins and cultural celebrations of the once Pagan festival 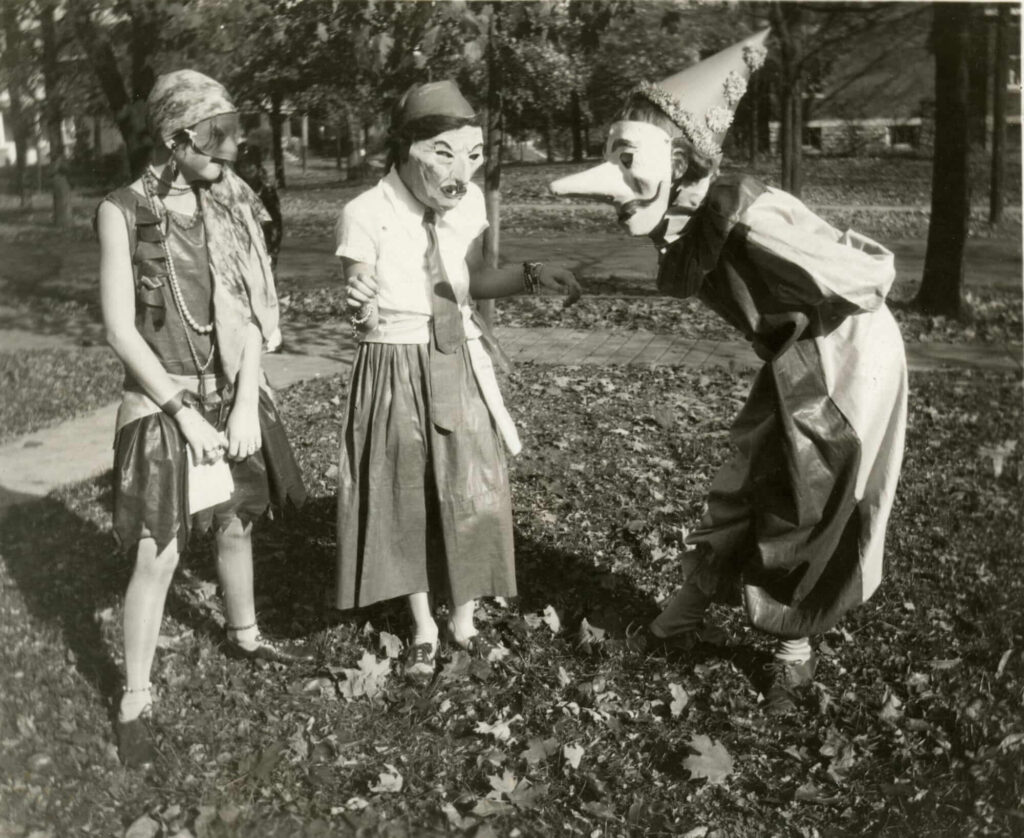 The flood of orange plastic into the local supermarket and petrol station forecourt stores is the signal that a cheapened and overexposed Halloween is around the corner. Grossly appropriated by big commerce, trashy outfits, orange plastic any things, and unwanted paraphernalia have turned All Hallows Eve into a sustainability horror show.

How about sparing a moment to check on some OG Halloween costumes from across time and around the world and take some inspiration from that. Look through the photos and see costumes that are more suited to the purpose of warding off evil spirts than a supermarket fancy dress costume.

The original idea of a DIY Halloween produces some images that will send a chill down your bones. Take some inspiration and have yourself an authentic and fun Halloween. 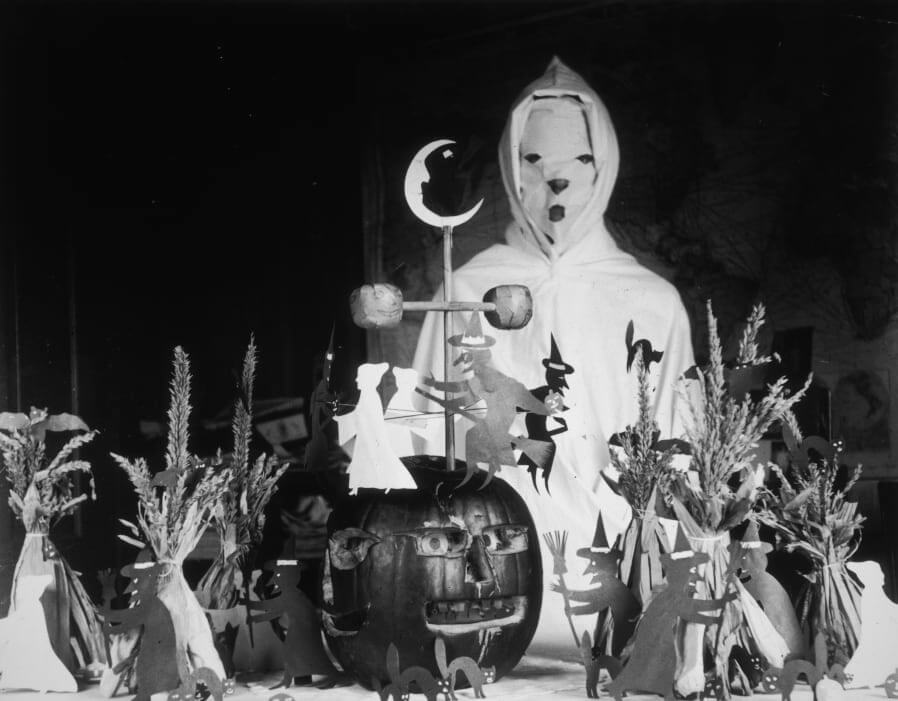 THE ORIGINS OF HALLOWEEN:

What is today’s vision of Halloween, with trick or treating, store-bought costumes, and parties, is something that originated from the Celtic festival of ‘Samhain’ over 2000 years ago. The festival was one in which people would light bonfires and wear costumes to ward off the ghosts of the dead. In Ireland, the UK, and Northern France, ‘Samhain’ was celebrated on the 1st of November, which signified the end of the year – with wintertime being associated with death due to the harsh conditions and the decaying of crops. Celts believed that the night before November 1st, the lines between the plane of the living and dead were blurred, allowing spirits to return to the earth. To commemorate the event, Celtic Druids would build sacred bonfires, on which crops, and animals were burnt as sacrifices to the gods. Animal heads and skins were worn as costumes during the event, where people would gather to tell each other’s fortune and ward away the spirits that threatened the land. 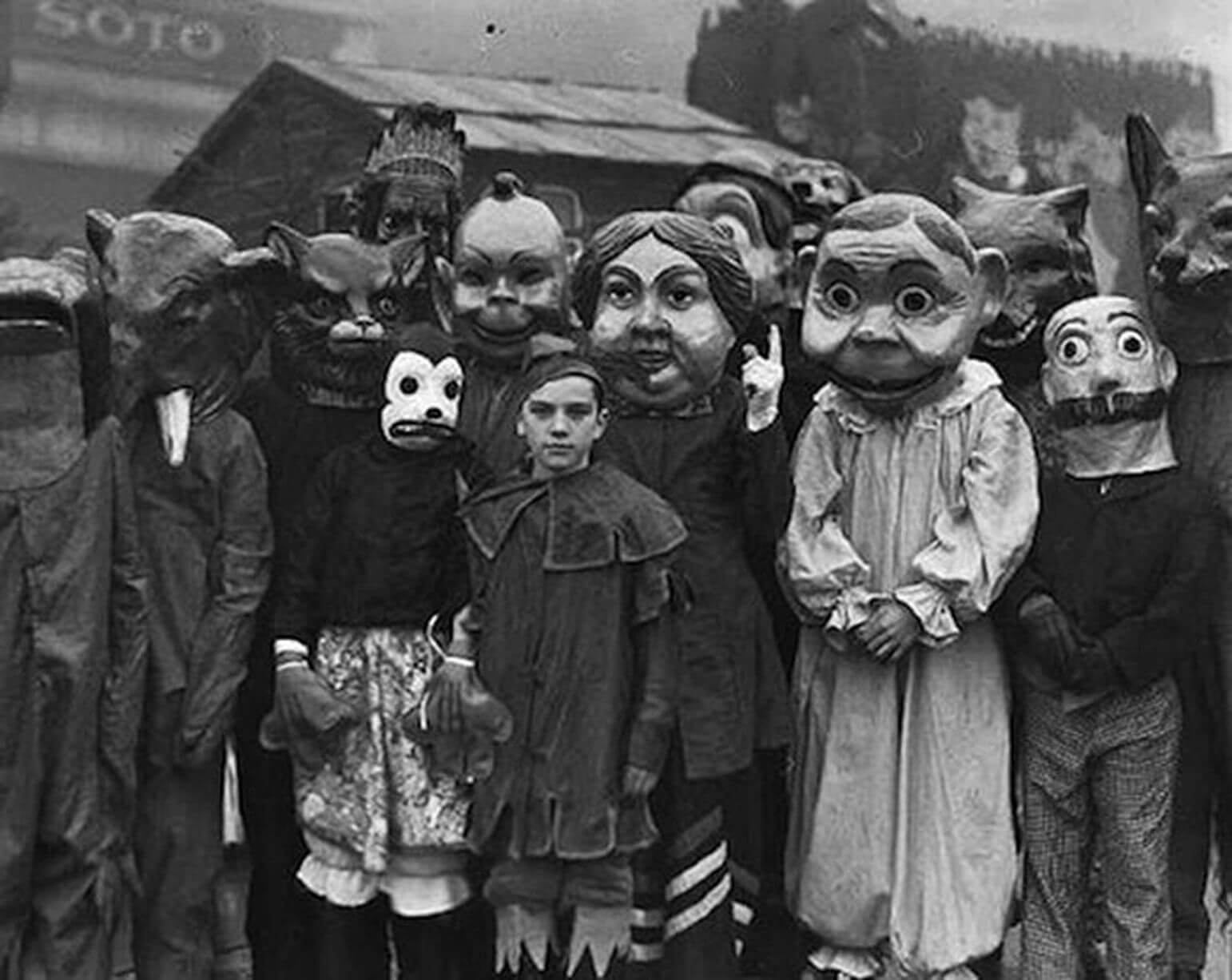 THE CULTURAL EVOLUTION OF HALLOWEEN OUTFITS:

Within the first half of the 20th century, Halloween costumes were far more serious than what is seen today, with costumes that were rooted in the traditional Christian and Pagan beliefs around the festival. The origins of the costumes can be dated back to the animal skins of ‘Samhain’, with Christianity adopting Halloween in the 11th century. In medieval England wearers dressed up in costumes that symbolised the souls of the dead. The overwhelming popularity of costumes in America can be dated back to the first Irish and Scottish migrants, who brought the tradition of the holiday with them. The Pagan nature of the holiday was embraced by Americans, with outfits at the time being made of stuff that could be found around the house. Whether it was makeup, sheets, or improvised masks, the whole appeal of Halloween costumes was the anonymity that was brought with it. 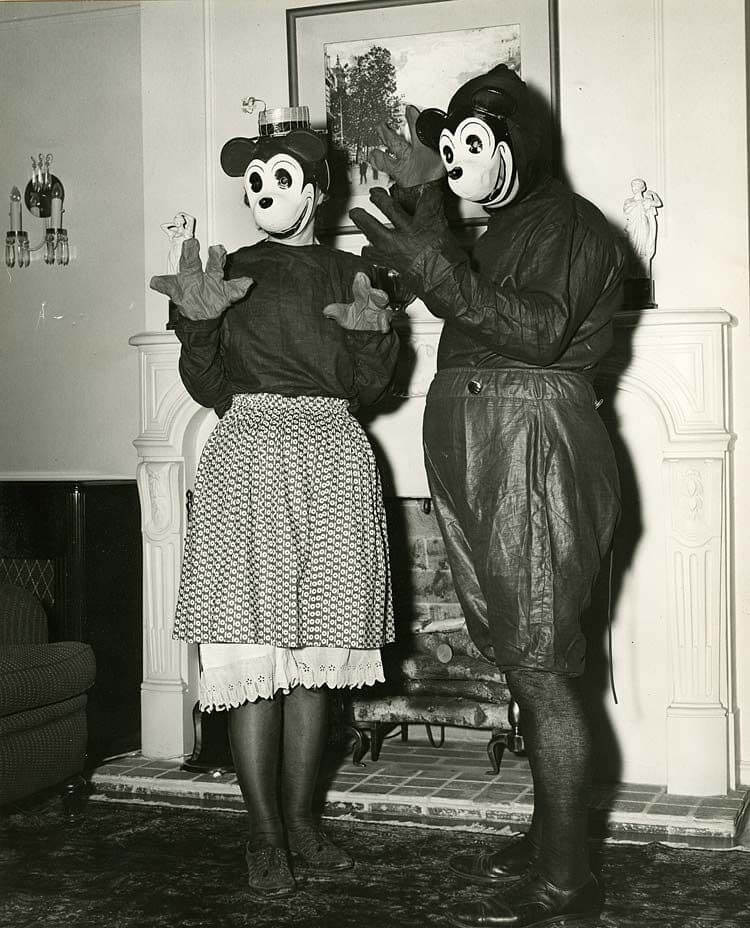 It was the 20s and 30s however that saw the roots of commercialisation start to creep in, appealing to families and children, and the emergence of costumes that were influenced by pop culture. The 40s saw a rise in vandalism, causing officials to attempt to rebrand Halloween as a children’s holiday, and it wasn’t until after World War II that adults started dressing up again for the holiday. However, it was the 60s that saw the largest shift in tone, causing the domino effect for what Halloween is today. At this point in time, the mindset behind Halloween became one that was far lighter, with costumes acting as a means of playing a lighter version of oneself. This tone saw a turn again with the popularity of 80s horror and slasher films making more gruesome outfits, and a large influence from science fiction and fantasy films. It was the 90s that saw ‘sexy’ versions of store brough costumes become established as a commercial product and the turning of a profit from controversial and political outfits. The costumes that have surrounded Halloween throughout the decades, have reflected the change in times and cultures. Despite this, there are numerous cultures around the globe who celebrate Halloween in their own individualistic ways.

DAY OF THE DEAD: 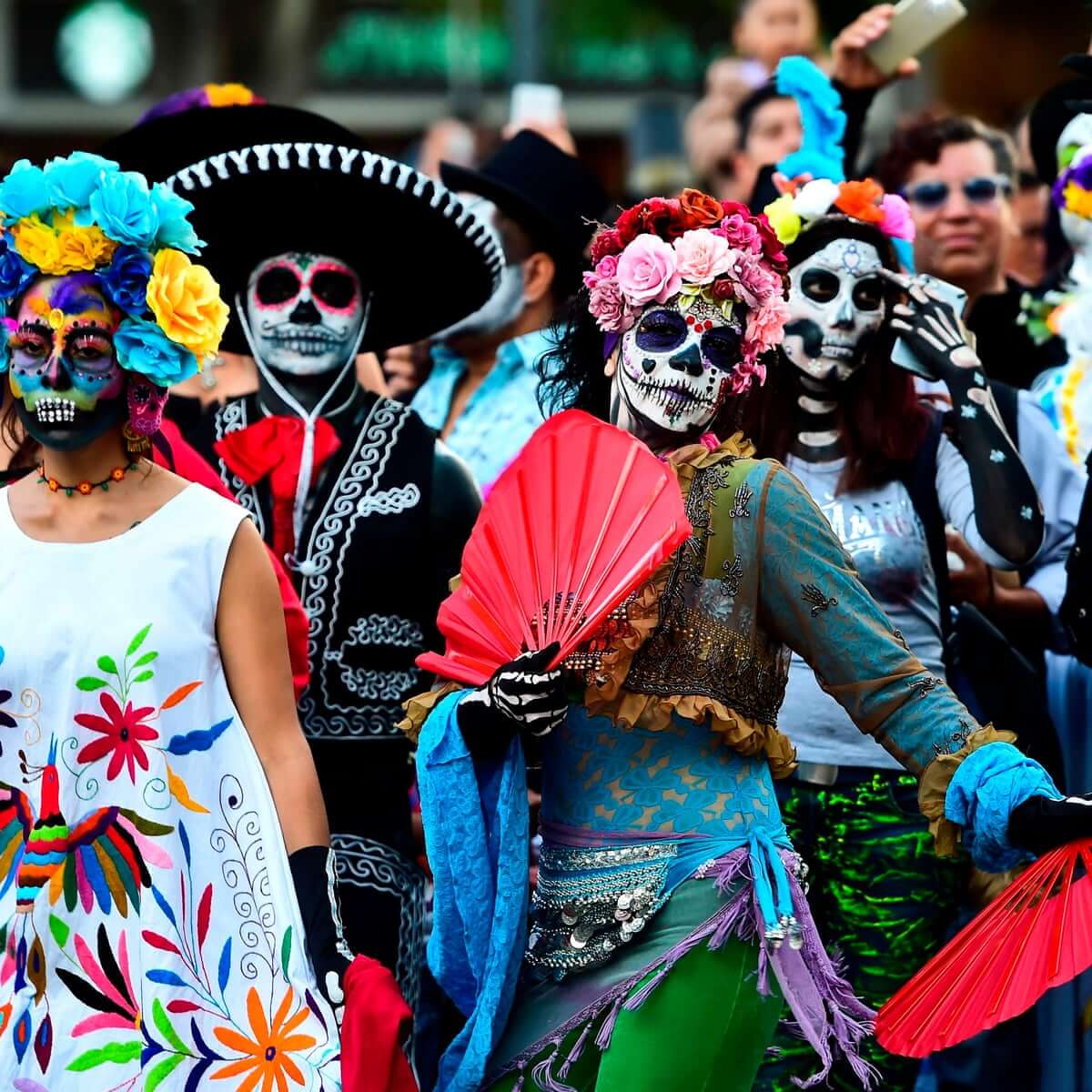 Being celebrated from October 31st to November 2nd, ‘Day of the Dead’ or ‘Dia de los Muertos’ is Mexico and Latin America’s answer to Halloween. October 31st is still seen as Halloween; however, November 1st is ‘Day of the Children’, a day in which all the souls of the lost children return to earth. November 2nd is ‘Day of the Dead’, which sees the return of the souls of adults. On ‘Day of the Dead’, it is believed that the border between the mortal plane and the spirit world are dissolved, allowing these souls to return to earth. Rather than the pagan beliefs that this could bring chaos and destruction, the souls of the dead return to feast, drink, dance, and play music with their living loved ones. Whilst different traditions of this festival are honoured in different communities, the holiday is unanimous in being a joyful celebration that pays respect to the dead rather than a solemn mourning. The families treat these returning spirits as honoured guests, leaving offerings and food at their grave sites or ‘Ofrendas’ (a home altar placed on a ritual display that is created for the lost loved one). The main similarities between traditional Halloween and ‘Day of the Dead’ are the costumes and parties, with costumes being a representation of deceased loved ones, traditionally wearing skull-based makeup and flamboyant outfits. Parades and processions are carried out as celebrations of the souls’ lives, with Mexico City holding the most renowned of these. 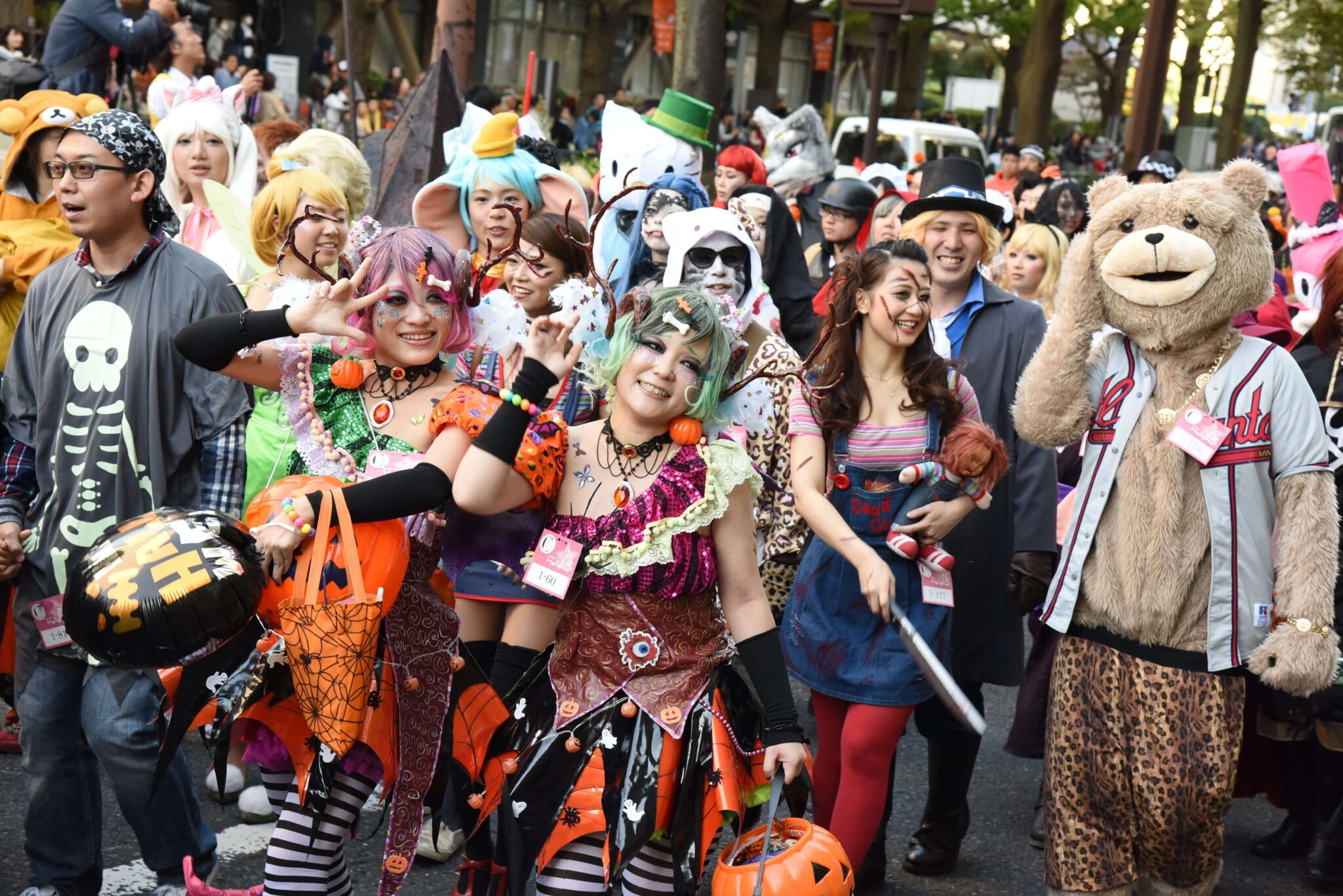 Unlike many countries’ family-friendly celebrations for Halloween, Japan’s version of the holiday is one that is aimed predominantly at young adults. Rather than trick or treating, the focus on Halloween is far more focused on parties, night clubs, and the atmosphere of the holiday itself. Halloween became very popular in Tokyo after Disneyland threw its first Halloween party in 2000. Shibuya crossing is a hot spot for Halloween, becoming Japan’s largest unofficial street parties, with over one million people flocking to the crossing dressed in traditional and pop-culture themed outfits. With Japan’s overwhelming cosplay culture, which takes inspiration from manga and anime, to TV, film, and video games, Halloween is another outlet for keen anime fans to showcase this, with parades and contests that celebrate this. 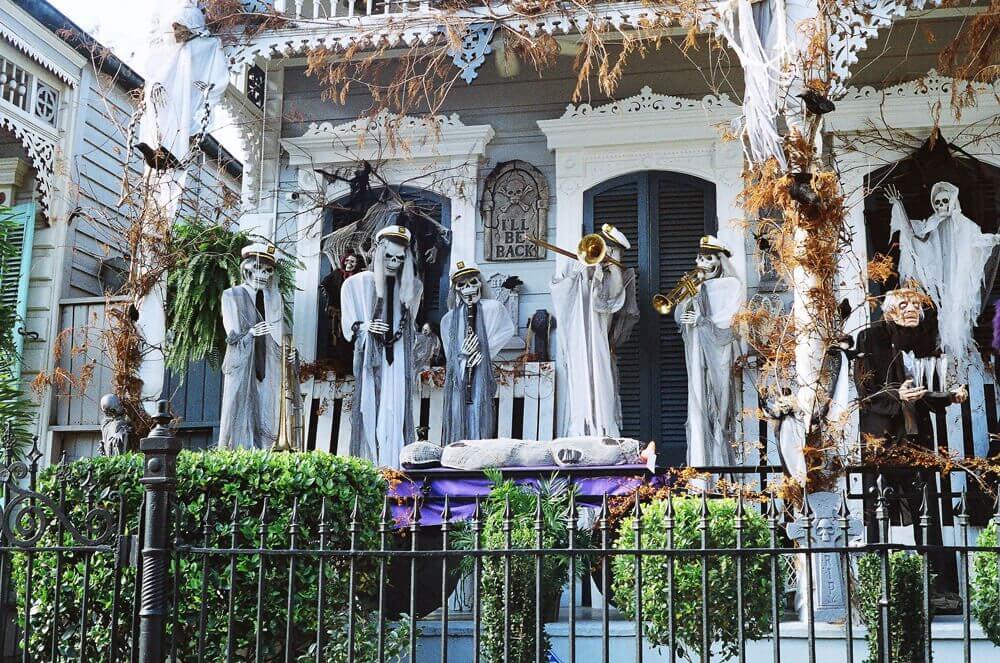 Being labelled the most haunted city in America, New Orleans’ Halloween celebrations are seen as more important than Christmas. Due to the dark and haunted side of the history around the city, both residents and tourists celebrate the holiday with extravagance. The city is host to one of the largest street parties in America, with Frenchmen Street being renowned to be host to thousands of locals and tourists clad in often outlandish and over the top outfits to celebrate the night in cheer. However, it is not just the night of October 31st that Halloween is celebrated, with festivities being all month round. Festivals and events are held throughout the month, and many residents decorate their houses in Halloween themed decorations similarly to the lead-up to Christmas.