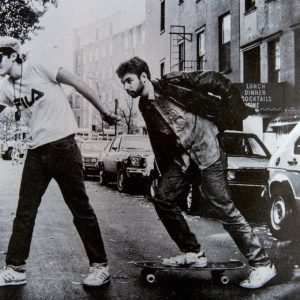 Let’s focus in on their 1998 VMA performance for MTV, presented by Ben Stiller who tells the audience that as a Jewish child, one of his dreams has always been to introduce the Beastie Boys. This nod to their shared Jewish heritage is so important- before these guys what other serious Jewish rappers existed? It had never been done before, and that shows how significant they are.

Donned in red boiler suits, the Beastie Boys come in with 3 MCs and 1 DJ, and of course the best MCs have the best DJ: Mix Master Mike- a member of legendary DJ crew Invisbl Scratch Piklz. Watching him spin vinyl to them rap is mesmerising in itself, when one of the boys come in slightly premature they recover with such ease you wouldn’t even notice it had occurred. They just style it out, because they’re the Beastie Boys and that’s what they do.

When the beginning of Intergalactic rings out everyone loses their minds. If watching this live performance on a screen can produce goose bumps up your arms then who knows what effect it would have on you if you saw it live.

All in all, that show was something really special- as were any of the Beastie Boy’s live performances.

Saturday 5th August marks what would be Beastie Boy member Adam Yauch’s 52nd birthday. Known as MCA, he was a founding member of the hip hop group, and a defiant political activist. He sadly passed away five years ago after a three year long battle with cancer.

One thing that can be taken from that MTV award show is Yauch’s social conscious and desire to use the platform that he has for social change. He stated that after ‘License to Ill’ he became more interested in spirituality and how what he does affects the rest of the world. This is evident when upon accepting their award Yauch realised that he had a rare opportunity to address a vast amount of people all at once. He used his time to speak out about Islamic racism going on in America at that point.

Looking at Yauch and honing in on his transformation from the beginning of his career to the saddening end of is pretty awe-inspiring. He calls himself out on his own wrong doings- apologising for the misogynistic lyrics in previous albums:

‘I want to say a little something that’s long overdue, the disrespect to women has got to be through, to all the mothers and the sisters and the wives and the friends, I want to offer my love and respect till the end’

These boys showed everyone that you don’t have to be from a certain background to enjoy or create rap music. They were a cultural touchstone and helped bring hip-hop into the mainstream.