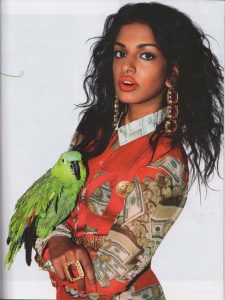 As the Sri Lankan musician turns 41 today, it is hard to not look back over the career of this incredibly gifted creative and not be in awe of what she has achieved. Her Wikipedia page lists the following titles:

Taking into account her tumultuous and often unsteady childhood as the daughter of a Tamil activist- often poverty-struck and meandering between Jaffna and West London, it is seriously no mean feat. Through varying mediums of art, she has exposed the world to not only music of other cultures, but significant issues that the mainstream media shies away from.

After graduating from Central St Martins, M.I.A. explored the realms of film, art and visual art. It was not until she went on tour with brit-pop band Elastica and created their album artwork that she was encouraged to create music. The encouragement came from Elastica’s supporting act: electro-pop-punk Peaches, who acquainted M.I.A. with the Roland MC-505 groove box. With the seeds sown, her mind drifted to childhood moments where music took hold. The most noted one, which explains the eclectic style that she is most known for, is hearing various genres of music emanating from the flats around her in 1980’s West London. Streams of hip-hop, dancehall, reggae, punk and emerging brit-pop radiated from the blocks around her, in a myriad of broadcasts.

Her first single ‘Galang’ was an underground hit- in 2003 it was played on college radios and basement clubs routinely, and indie record label Showbiz Record’s took on to pressing 500 vinyl copies of the single. A real indicator of her music to come, the single was an amalgamation of dancehall, electro, jungle and world music. After signing to XL Records and released the politically charged and diverse sounding ‘Arular’- named after her father’s activist name, which had immense critical acclaim.

Worldwide acclaim came playing a circuit of festivals and her next album Kala- after her mother -which boasted hits ‘Paper Planes’, ‘Boyz’ and ‘Jimmy’. The songs were a rare, but refreshing change to the usual bout of Top Hits, as they took a stand as commentaries on the absurdities and trauma that many people outside of the western world face. The latter, for instance, was said to have been inspired by a Liberian journalist who invited her out the African country for a tour of the areas heavily affected by genocide. The self-explanatory ‘Bird Flu’ is another example.

Shockingly, her voice has been downplayed or labelled as ‘terrorist-sympathiser’ on more than one occasion, which in itself explains the dire need of more honest, direct and creative people like M.I.A. in the world today.

That, paired with the guerrilla-style carnival of colour, sound, art and pattern that she brings through her clothing, videos or music, shows that  M.I.A. is a treasure the world should thank on her birthday today.