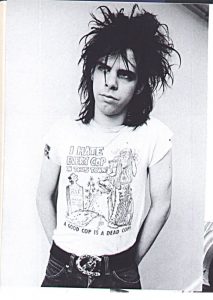 Once in a while, there comes the time to write broad but celebratory articles in honour of multi-talented creatives, and it is somewhat understandable to feel a little fainthearted. Especially those who boast ingenious indexes spanning multiple decades, genres and mediums.

Maybe it is just my inexperienced self, but that is certainly what I felt approaching July 26- Nick Cave’s birthday. Time wasted reasoning with the various manoeuvres I can make to lessen the load. Meditating on how to use words to describe the life of someone who has such a formidable command over them.

If you are a newcomer to the Australian born artist, it alone can be a daunting task to approach his portfolio- whether it be his music, writing, poetry, acting or painting. But you know he’s good, right? All I knew before delving into the black waters of his discography was that those who knew music, knew Nick Cave.

You may be on the cusp of familiarity with his sound- often eerie and cold, juxtaposed with sumptuously rich fragments. His booming, baritone, often Bowie-esque voice encompasses and connects themes of love, sex, death and religion, just to name a few. This is why his sound is understandably, but often indolently, labelled ‘Goth rock’. Which is reasonable in part- seeing him in the flesh only confirms his association to Goth: his slender, pale frame extends high above you, and his striking features are framed with slickened black hair. You wouldn’t be the least bit surprised if it was later uncovered that he lived solely on a diet of black coffee, cigarettes and merlot.

In his formative years, he and a handful of school friends facilitated the burgeoning post-punk scene in Melbourne with an outfit that became known as The Birthday Party. Sinister, droll lyrics are groaned and gargled with anguish over uncomfortable drones and jangles. Their last album, 1982’s Junkyard, is an accurate summation of their sound. They split the following year, but paved the beginning of his best-known formation, Nick Cave and the Bad Seeds.

With the sound of each release differing from the last, the Bad Seeds articulated their obscene ability to seamlessly meander between genres and feeling. Almost encyclopaedic, their towering list of albums take the foundation of The Birthday Party and journeys through blues, Latin, folk, drone or gospel. Consecutively, Henry’s Dream, Let Love In, Murder Ballads and The Boatman’s Call are all starkly different but equally steeped in the romantically disturbing lore that Nick Cave paints, often leaving you shell-shocked and exposed. Famed duets with Kylie Minogue and PJ Harvey seem to elevate his prowess for narrative- they render you an intruder on beautifully sinister encounters.

These traits are continued through into his solo work. The scope of sound on each album across his portfolio leaves beginners with the mammoth task of having to listen to each one in order to find the one that makes their chest swell with feeling. But long-time fans will encourage the value and promise the reward of doing so.

At times, it’s not easy. The chaotic void of drone and noise builds and thrashes and leaves you tense and aching in your ribs. But for the most part, Nick Cave is an enchanter and raconteur. Conjuring a range of imagery, from Ophelia-like melancholia, surrounded by palettes of drenched flora and fauna; to smouldering ash in ancient biblical landscapes; to plum velvet drapes, the sweet flesh of pears and the rising scent of opium. And that is surely where his genius lies. He has worked, created, experienced, felt and suffered more than most- to quite rightly place him as one of the most imitable artists of our time.