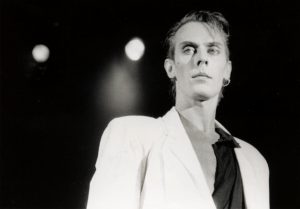 Born in Northampton in 1957, Peter became the lead singer of one of the world’s first ever gothic-rock groups, Bauhaus, and further through the years to have an abundant career as a solo-musician in alternative music. Although he only found relative commercial success in the US later on in life, Bauhaus- regardless of its short existence- went on to enjoy a supreme cult following. 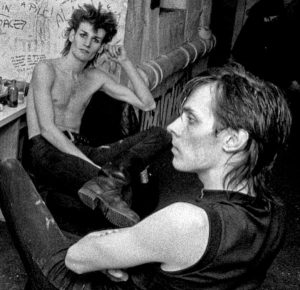 Peter Murphy was firstly introduced to Daniel Ash, the future guitarist of Bauhaus, through school. Although the band fused a whole manner of genres together to create their sound, it was their dark and gloomy soundscape that they became the most well known for. Aesthetically, Peter can only seem perfect for the role: sporting a waif frame, pale skin, gaunt cheeks, sharp cheekbones and booming, baritone voice. Combined with his love for gloomy poetics, it is not difficult to see the part that he played in the building of Goth culture.

When Murphy treads the boards, it is an act of possession. Peter Murphy is a self-contained pantheon of gods. He exhibits qualities that are, in turn, Dionysian, Apollonian, and Mercurial. At times he walks in step with angels, though on occasion a darker path is traversed.

His voice is the type of voice that is seldom heard in these electric days, a throwback to the gas-lit era and the glory days of the traditional actor/manager of Shakespearean line. The unamplified oration that boomed from beneath the velvet slouch brimmed hat of Sir Edmund Kean and his exalted ilk. It is a voice that demands attention and always, always gets it. It is a Voice.

The first time I ever saw Peter, I was immediately struck by his unselfconscious natural grace and charismatic charm.
“What do you think?'” asked a young Daniel Ash, referring to this nascent star.
“He’s solid gold!” I replied, “solid gold!”

Alongside the classic Bela Lugosi’s Dead by Bauhaus, Murphy can be best remembered for his surprise hit off his solo album Deep, entitled Cuts You Up. The single spent seven weeks at the top of the modern rock charts, only to be knocked down by REM’s Losing My Religion.

Peter has been said to be the inspiration of many gothic characters in graphic novels and films. From starring in the David Bowie film The Hunger to Neil Gaiman’s The Sandman or James OBarr’s comic The Crow, he is forever a source of stimulus for all things romantically horrific. 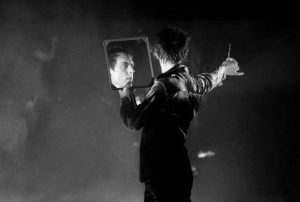 Living in Turkey from 1992, Peter released Lion in 2014, which was produced by Killing Joke bassist Martin Glover. It was the first of his album’s to chart since Holy Smoke, and the band have been touring all the way through to 2017.