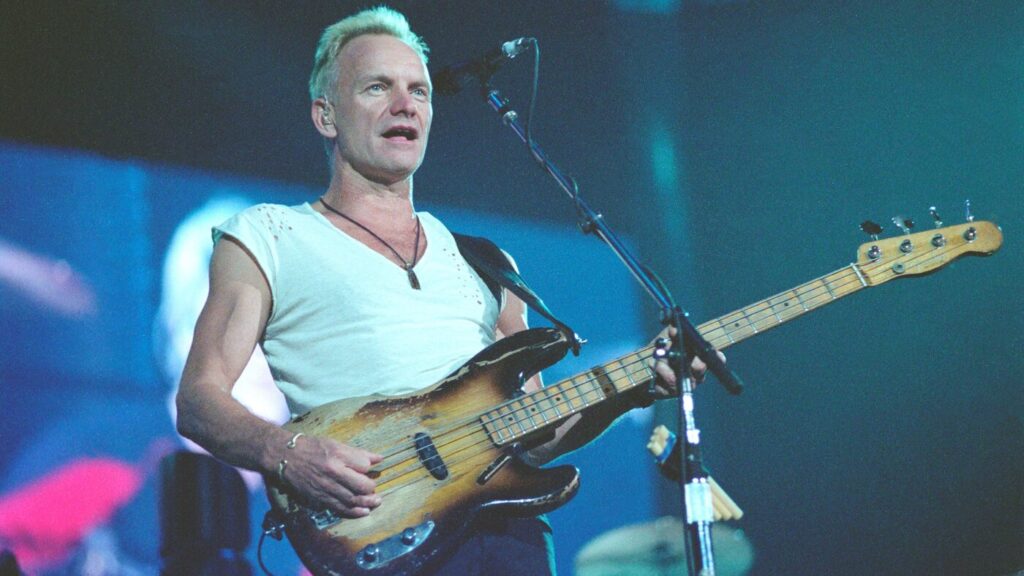 Today marks Gordon Matthew Thomas Sumner’s – CBE he’ll have you know- 66th birthday; otherwise known as Sting. The eccentric nickname evolved from an obsession he had with certain yellow and black striped jumper that he constantly wore when he began performing in jazz clubs in his youth. A bee is quite a nice allegory for Sting: you probably won’t truly miss him until he’s gone. Just like the cool uncle you wish you had, or like warm fuzzy socks you receive from your mother at Christmas – a present you’ll never admit to enjoying – Sting has become a person whom we all feel comforted by: he’s always around when you need him, he’ll keep you company in those darkest moments, and will sometimes pop up when you don’t expect or want him.

The pen-ner of cult wedding song ‘Every Breath You Take‘, wailer of ‘I want my MTV’ in Dire Straits ‘Money for Nothing’, collaborator extraordinaire, and keen participator of Band Aid, Sting’s mental musical trophy cabinet must be full to the brim. Time to go to IKEA and get a new one.

Born in Northumberland, Sting started off his life at one of the lowest rungs on the ladder: he only began to dream big when he saw the Queen Mother wave at him sometime between the ages of eight and ten. Apparently, all it took was a rich old lady with a glove adorned hand in a Rolls Royce to inspire the young musician for a bigger life. If only it was that easy now. He then decided to learn how to play the guitar, moved to London, formed the Police, and let’s just say the rest is history.

With the formation of quintessential eighties new-wave, reggae-rock, partly-pop band the Police, Sting rose to fame as the calm and collected front man; the band eventually earning in excess of twenty awards, including Grammys and Brit Awards. One of their most iconic songs, ‘Roxanne’ seemed to be a happy accident: unbeknown to him, when Sting accidentally sat on an open piano in the studio and chuckled to himself, a microphone was recording the whole thing. In the essence of sincere candidness, the band decided to include this recording at the beginning of the song, adding to the innocent magic of Sting. ‘Roxanne’ was a rather unconventional pop song: raunchy in its subject, ravishingly reggae in its sound: the singer falls in love with a prostitute from the Red Light District. This subversive tune has lead to many delights, such as a ‘Roxanne’ drinking game, and an atrociously awesome acapella cover by Eddie Murphy in the ’82 classic 48 Hours. And where would we be without them? Probably a little more sober with a little less laughter.

Whilst the Police parted ways in 1984, Sting was the gift that kept on giving: he had his own solo career, releasing not one; not two, but twelve solo albums. Sting’s musical collaborations are also wild and bizarre. It’s almost as if every single record label that has a potential-collaborative song has Sting at the top of their speed dial list: he performed ‘I’ll Be Missing You’ as a tribute to Notorious B.I.G with Puff Daddy at the MTV Music Awards in 1997, he sung on Craig David’s single ‘Rise & Fall’ in 2001, and with Mary J Blige on his album ‘Sacred Love’ in 2003. Maybe all this time Sting has just been trying to break into the hip hop or RnB scene and we haven’t even properly noticed it.

Beyond musicianship, Sting has to be commended for his charity-work. He has played Live Aid a handful of times; his song ‘Driven To Tears‘ was a kick up the backside to anyone who had become apathetic with world hunger. He has also contributed to Amnesty International, countless charity gigs such as Hope for Haiti and Music for Monserrat, and also started up his own foundation called Rainforest Foundation fund, to, of course, help save the Rainforest. The energy he puts into charity work is astounding and commendable, and we are happy to take our hats off to him for his labours.