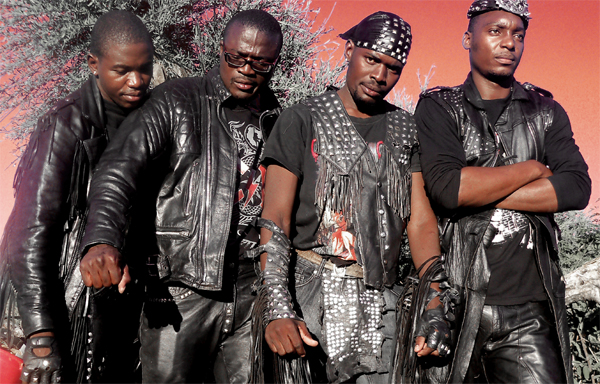 We are always in the search for sub-culture genres and have recently found something awesome. We have all seen the heavy metal looks and get ups sported by Mel Gibson in Mad Max and Dennis Hopper in Easy Rider. A look that is associated with the 1970s that has been cleverly re-appropriated in a new generation. In the streets of Botswana, the patriotic identity has developed into a style artfully close to our own, heavy metal counter-culture. Seen to some as a mere throwback to the NWOBHM form, having snug leather clothes with, spikes, chains and the occasional extended tassel has become a true image of a contemporary community.

The appearance of Botswana’s metal style is proof of a long standing and continuous cultural evolution, one that stemmed from the roots of classic rock. For the general society receiving this different look is as it would be for societies anywhere. Some find confusing and unnatural, for some its entertaining and exciting, repulsive to others and in some ways intriguing to everyone. For the heavy metal groups in Botswana it is about the music and the identity it gives to them. It is about being a part of something bigger than themselves. They partner their love for the music and style with their traditional beliefs, mythologies and sounds and this is what goes on to fill in the lyrics to the more western instrumentals that come with heavy metal. Making it a slightly more soulful and stylized sub-genre in itself.

There is a strong sense of community amongst Botswana metal heads and it seen a lot at their local metal shows. They dance and mosh and quite aggressively, serving as a channel not only for pleasure and entertaining but also a way to get out their thoughts and emotions, relieve stress and express passion and strength. For the men it is a way of life that not only portrays their style and influences but also their power and security.

Many metal heads in Botswana are cowboys from the villages and farms (where many of them earn a living), so they mix the cowboy image with a biker metal look. Many wear hunting knives and dead animal parts. There are competitions among them to see who can look the most brutal. While they do incorporate the aggressive side of metal they are seen as role models in society and often followed by a trail of young children in admiration, they’re seen as protectors of the community with a strong appreciation of civil responsibility.

from the work of Frank Marshall: Renegades.