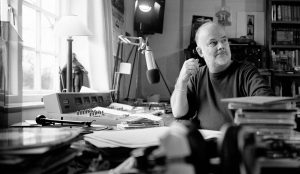 Between the late sixties and 2010, the music industry underwent repeated transformation. What was popular, the way we listened, the way we perceived it and the money we invested. New genres were thrusted into the mainstream every few years. Yet, one thing that has remained consistent over all these years, was why what was popular was popular. It is heavily contested that what we listened to and enjoyed over these near forty years was due to one man: John Peel.

Thirteen years since his death, today would have marked his 78th birthday. His death was considered a great loss to not just the industry, but also the world beyond that. This year would have been the fiftieth anniversary of his career as a radio DJ for the BBC. The longest serving disc jockey at the station, he is largely hailed by his colleagues and contemporaries as the upmost authority on what music is worth listening to.

The Internet houses hundreds of obituaries for the broadcasting legend. All of which catalogue lengths of bands that we know and love, which are then traced to the times that he was the first to pluck them from the ether, and continued to broadcast them to the country.

Over the years, his enthusiasm for music, fervour for supporting new bands, and an obscenely keen and well-trained ear for spotting knockout but unusual hits, placed him at the height of taste making. Seeing the beautiful in what most would indolently see as ugly. Some even regarded him as blessed with powers of divination in his ability to predict trends in music. Or was it just him that set the trends?

Did you know that he played Nirvana on the radio in 1989? Most people in the immediate area of Seattle had not heard of them at that point. Through his radio shows, countless bands in their infancy found their way into the speakers of millions of listeners across the globe. Happy Mondays, New Order, Sonic Youth, Siouxsie and the Banshees, Pink Floyd, Led Zeppelin, Roxy Music and reels more- all of whom have expressed perpetual thanks to the man who kick-started their careers.

In fact, the hugely popular ‘Teenage Kicks’ by the Undertones- was one of John’s favourites. Back in 1978, when he heard the single for the first time it was previewed to him, he burst into tears, and awarded it a 28 out of 5 stars. He went on to broadcast in twice in a row- claiming that: ‘It doesn’t get much better than this’. Thinking back, it’s difficult to imagine hearing this song without that particular plug. The Undertones were, at that point, an unknown punk band from Derry. It appears difficult even for the band themselves it seems. On hearing the news of his death, bass player Michael Bradley spoke to the Guardian: ‘He was a very funny, very warm man and we will always be grateful for what he did for The Undertones. Personally, I find it incredible what he did for the band and we always got huge pride out of the fact he said Teenage Kicks was his favourite single’. John liked it so much that he requested the lyrics to be inscribed on his gravestone.

His love and push for punk music in the seventies is well recognised. Something not just entirely different to what the world had heard before, but something entirely different to what he had enjoyed and played up until that moment. His taste and enthusiasm for sharing knew no restraints of genre. This is reflected similarly, many years later in early 2004 with grime music. He had discovered the new British genre of music, composed by mostly African and Caribbean community in East London, on the pirate radio station Rinse FM. Instantly enamoured, it was in May later that year that he queued up his first grime song to the nation, ‘Battle’ by Jon E. Cash. This progressed into a weekly hour of grime emanating to the BBC’s listeners. Soon enough, the pioneers of grime, Skepta, Wiley and Dizzee Rascal became household names.

The way in which we plug in and tune in to what we have decided we love- seemingly out of our own choice- is heavily due to the immeasurable influence of a man who- beyond knowing music, truly loved it.

The world has yet to find an equivalent connoisseur to steer our ears down the path to truly great, new music. Happy Birthday, John Peel.