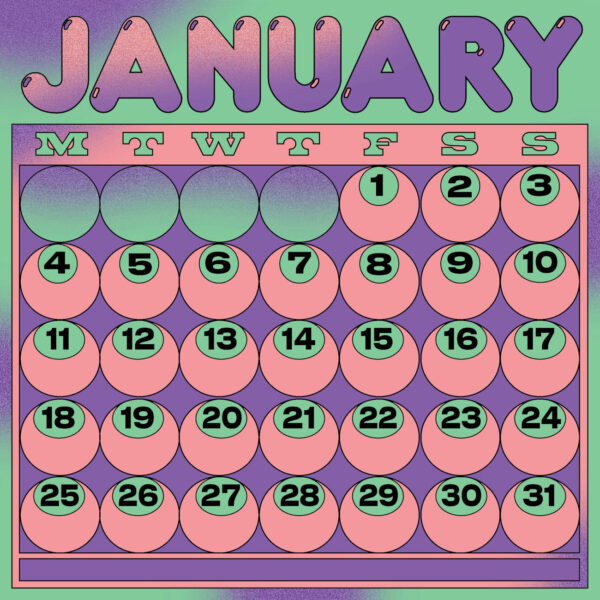 Under the guise of Raissa Pardini, graphic design becomes a joyous optical illusion of repetitive typography. Harnessing her own experiences as a musician (Raissa was the bassist in Yassasin), Pardini is adept at transmuting the spirit of a song into the visual realm, making her a firm favourite amongst bands such as Squid, The Orielles, Pond and Katy J Pearson. Enhancing the most basic form of communication – the written word – through a spinning wheel of triumphant colour and geometric pattern, Raissa’s fearless experimentation (from creating collaborative fonts for charity to graphic exhibitions) ensures that the designer, and her designs, are never stagnant. We spoke to Raissa about her favourite record cover visuals, the perils of social media and the significance of play.

You’re known for creating designs for band posters and record covers, how do you contort an aural sense into a visual one?

I think that the listening experience can be taken further if you can also look at something and see it as a beautiful interpretation. I always ask to have access to something to listen to – even if it’s just rough cuts or an album before mastering – it means we’re all working together towards the final product. I do a lot of research; it’s about getting to know each other visually. Like with The Orielles; we’ve worked together a lot and we know each other’s taste. We’ll test fonts and colours to see if the band can recognise themselves in the visuals.

It’s important to be striking and bold in getting the message across, sometimes an image is seen first and the music comes second – not in terms of importance but because you often see a cover in a record shop or on Instagram. I feel so privileged to have that in my hands because it’s a work of so many people and so many hours of energy and talent.

Your design is led by lettering – often the typography becomes an art work in itself – where does your fascination for fonts come from?

I love history in general; my passion for art started with History of Art. I’m from Tuscany, I have Florence around the corner where you’re walking in a living painting all the time. I think I’m just driven to finding the beauty in all things, from words to the setup of your desk or the way you choose to dress…that’s why I think there are similarities in subculture; it’s the interest in aesthetics. I remember being drawn to graphic typography and artists like Keith Haring. I knew I wanted to work with art but I never saw myself as a traditional artist; I don’t have the patience to be a sculptor or a painter, the way I create is very digital.

Letters dictate the history of books and cultures, how we swap culture between countries and how we translate things into different languages is fascinating. I love seeing how fonts can be interpreted and re-invented by different graphic designers.

You’ve recently collaborated on a calendar with Pooneh Ghana’s polaroid photographs of musicians. Was it strange adjusting to include images?

It was a challenge! The reason why I wanted to do a calendar was because one half of a calendar always looks good but then everyone forgets about the grid – I’ve never seen a calendar that focuses on that part so I thought why not get the most creativity out of that structure! We managed to give importance to Pooneh’s pictures and balance the space between the two.

Is there an album cover that is the pinnacle of design aspiration for you?

I never have an answer for this; I’m very drawn to Post-Punk/New Wave Polish and Eastern European designs. In the 80’s they started to introduce the digital aesthetic without digital platforms, so it was almost post-analogue and pre-futuristic! I also like African record sleeves; they have a very raw creativity which we lack in the West. We think too much on the weight of what society thinks beauty is, whereas African music takes the edge off of trying to find something beautiful and actually gives a more natural perspective. They use ugly fonts in the best way possible!

I’m inspired by a natural approach; it reminds me of being a kid where you don’t know the rules and you can just play. The Italian designer [Bruno] Munari had a TV series where he worked with kids because he was inspired by children’s creativity. I went to an exhibition in Milan that was dedicate to him, it was called ‘Forbidden not to Touch’ and it was just for kids and you had to touch everything! It was such a hilarious and beautiful experience.

Do you have any projects that particularly stand out for you?

Group Fonts was very challenging; it was a font like no other! Usually, you have one artist to look after and that’s hard enough, this was 37. The difficulty was putting everything together, making everything work and promoting it at the same time.

I am in the process of starting to write a book, I think it could be the hardest thing I’ve ever done. I’m free to do what I want, which is amazing, yet having an unlimited choice is like being in an ocean and you don’t know which way to swim. I want to find a way for the book to grant some general assets for people to get closer to design but to also be personal. A lot of designers are either trying to be completely new and forget about the past, or are going back into history – there isn’t really a bridge of both, I want to talk about how we can get the best out of both without compromising.

You’ve recently taken a step back on social media, citing that algorithm-led platforms will make graphic design culture too similar and repetitive. Can you elaborate on that?

Being plagiarised gave me lots of anxiety; all I wanted was for my work to be recognised. The posters that were ripped off meant that someone was profiting from posters which the original independent bands and artists were profiting from. It’s not a respectful culture to me.

I’m not interested in gathering followers or whatever, I’m convinced that Instagram is going to die soon and then it’s like “What’re you gonna do with all those followers now?!” It’s much better to do something that is timeless and designed well for its environment, not just for platforms.

Are there any unrealised projects you wish you could do?

I had an exhibition of posters two years ago. I have an idea of taking typography to a different dimension beyond printing, creating an innovative exhibition as an installation-based experience. It’s in my head but it needs a space to be experienced in, obviously the pandemic has put an end to that for now, but maybe after the book!

Experimenting with typography is something I will continue to do; I get bored very easily. Not that I don’t appreciate what I do but at this point in my career I want to do different things and get away from the retro label that everyone seems to give to me because I use lots of colour!