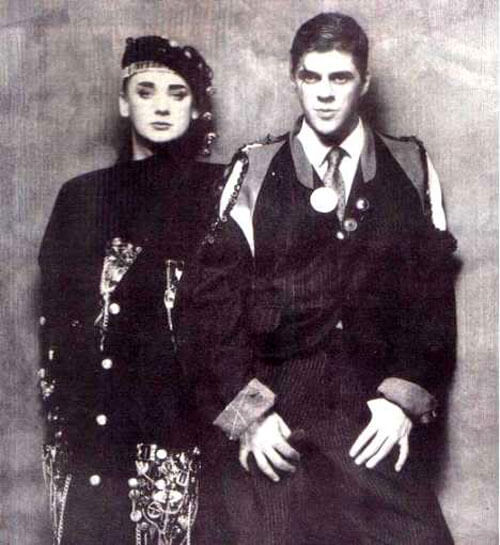 Hailing from Devon, Blame ran away from home at 17 headed straight for London but it didn’t work out as expected and he turned North to Manchester. Keeping company with the likes of Peter Saville and Howard Devoto, Blame found the city more relaxed. Without the siren call of a store like SEX, Blame was instead busy creating his own pieces from any materials at hand. By 1979 it was time to head back to London.

A non-conformist at heart, Judy Blame was a child of Punk and the DIY culture was one of the drivers in his creation of Jewellery and accessories that re-appropriated anything from safety pins, chains, old metal and even bones that had been recovered from the Thames.

In 1985 Blame worked with John Moore to create The House of Beauty and Culture in Dalston, London. A craft collective of like-minded artists the House was a subcultural citadel that included the likes of footwear designer John Moore in 1986 and designers Christopher Nemeth and Richard Torry,

This was only the first of many other collaborations as a Blame went on to be a consultant with designers like John Galliano, Gareth Pugh, Mark Jacobs, Rei Kawakubo at Comme des Garçons, Rifat Ozbek and Kim Jones at Louis Vuitton.

Blame was also involved with Ray Petri’s Buffalo collective and produced several fashion editorials for publications such as i-D, BLITZ and The Face.

His ability to create symbolic images led to a career in the music industry as an art director and image consultant for artists like Bjork, Kylie Minogue and Massive Attack.

The present exhibition brings together artefacts such as clothing, jewellery, fashion editorials, sketchbooks and T-shirts to represent Blame’s provoking approach to fashion and desire of experimentation. The exhibition is accompanied by a limited edition zine he compiled.

More information can be found on www.ica.org.uk