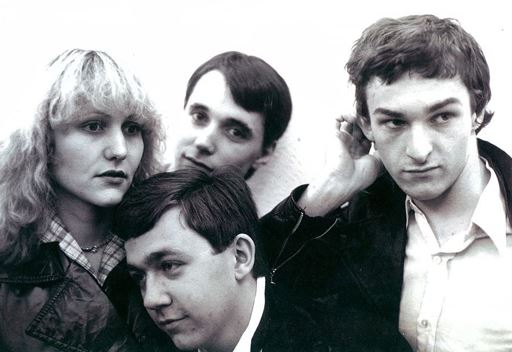 Formed in 1976 Marie et les Garçons were a French Punk / New Wave band formed in Lyon. The bands origins lie with a group of students in 1975, who left the Lycée Saint-Exupéry in Lyon to form a band called Femme Fatale – matching their rebellious attitude and music tastes. The original line-up consisted of Marie Girard, Patrick Vidal, Erik Fitoussi, Christian Faye, and Philippe Girard. In 1977 the lineup saw Vidal take over as lead singer and Jean-Marc Vallod joined the band. Inspired by and playing many songs by the Velvet Underground and Roxy Music the band found much in the music of these early pioneers in shaping their own sound.

Performances by Femme Fatale were spotted by the legendary Marc Zermati of Skydog records who signed them to his label and on his recommendation, they changed their name, to Marie et les Garçons. Zermati owned the Open Market record store in Paris, selling largely US garage and punk rock music, and had created the first independent shop distribution in France with Jimi Hendrix, Jim Morrison (from the Doors), Winter recordings Sky High and the Velvet Underground.

In 1976, Zermati had organised the first European punk rock festival in the French town of Mont-de-Marsan, and again in 1977. It was an unexpected location for a music festival, especially a punk one, with the town known for its traditional values and for bull fighting.

What was more remarkable in 1977 was that the festival took place during the conservative period of President Giscard D’Estaing who had outlawed music festivals entirely. Zermati had to keep a very low profile before the festival to avoid persecution. Youth movements in France were highly feared – with punks being quickly likened to Neo-Nazis.

In June 1977, Marie et les Garçons played at the Monte de Marsan Festival, through an invitation from Zermati. This performance saw them share the bill with the Jam, the Clash and the Police. They also played alongside notable French artists in the music scene, such as Asphalt Jungle.

The most important facet of this event was that it provided Marie et les Garçons the opportunity to meet Michel Esteban. Esteban was the Editor-in-chief of Rock News magazine, the founder of the leading Paris Rock merchandise shop and an entrepreneur who had just created the Rebel Records label. Marie et les Garçons were the first artist to be signed to this label, echoing a very similar situation of Malcom McLaren and The Sex Pistols.

In 1977, Marie et les Garçons released their first single ‘Rien à dire’. This was followed by another single, ‘Attitudes’ / ‘Re-Bop’ released in March 1978. However, 1978 was the year that marked a string of performances for Marie et les Garçons, including the famous performance at the Theater Antique Fourvière in Lyon which ended at 6am. The band later performed at CBGB, New York’s most famous music club, supporting X-Ray Spex. This in turn presented the opportunity to support Patti Smith and Talking Heads when they were on tour in Paris.

A temporary halt to the band’s activities were put on hold for several months while Charriau and Fitoussi participated in national service. On their return, they were inspired to make more disco style music and in 1979, Marie and the rest of the group ventured to New York to record their first album. Though, the change of style insisted by Patrick Vidal to a more disco sound led to Marie prematurely returning to Paris. The rest of the band continued as ‘Les Garçons’ and finished the album ‘Divorce’, which was released towards the end of 1979. It reached the American billboard; however, it did not see any commercial success.

The Garçons later performed some shows across France after the release of their album. After the tour finished, Vidal left the band, leaving Fitoussi, Charriau and Melon and Chris Levrat who commenced a final short tour in Europe in early 1980. There was a reunion of the band in 1987 and further performances in 1988 and 1990. Sadly, Marie Girard passed away aged 40 in 1996.